I’ve been blogging about the arrest (twice) of preacher Josh Williamson in Perth, Scotland.  He said that he was arrested and was taken to a police station, where he was refused a solicitor.  The police have denied that he was arrested.  He was arrested again last Saturday.  The circumstances of all this seem very unclear, and the police seem disinclined to clarify matters, which raises the worst suspicions.

Today I learn that the Spectator has run an article by Rod Liddle, Josh Williamson is arrested for preaching the Christian gospel in public.

Freedom of speech is alive and well in Scotland, then. Pastor Josh Williamson took the Christian gospel to the streets of Perth last week, before he was arrested by the old bill for a ‘breach of the peace’. Asked why he was being arrested, Plod No 1 said because you’re too loud, pointing to the electrical device the clergyman was carrying. That’s an MP3 recorder, he replied, it’s not an amplifier. Then Plod No 2 claimed it was the content of his sermon, although he could not put his finger on what it was exactly. Hauled down the nick, refused the right of a lawyer, Williamson was eventually released with a verbal caution and the comment from another copper: ‘You seem like a reasonable man, why not just stop preaching?’

This all sounds very bad.  But we’re not getting the full story here, I sense.  Why are the police doing this?  This is what makes no sense to me.

People like Josh Williamson have stood in the streets, preaching the gospel (to a handful of supporters, in the main) for at least 50 years.  What is the new urgency that means that the police now need to harass them?

Some may wonder why this blog, which is mainly focused on patristics, is devoting space to this issue.  But it seems rather difficult to focus on the confessors and the martyrs of the past, when I read that new ones are being created on the streets of Britain and the USA right now.

Oh for happier days, when such things were unheard of in a free country.

Update: While looking for an illustration, I happened across this 2012 article about another preacher being arrested (and acquitted) in Inverness:

Clutching his bible and carrying his placard, the former bricklayer is not only a visible feature but very much an audible presence — although his direct approach is not always appreciated by shoppers and passers-by, as he recently discovered.

For the 66-year-old recently found himself in the dock at Inverness Sheriff Court, accused of making offensive remarks and warning people they would “burn in hell” if they did not turn to God.

Having denied the charges, Mr MacDonald, of Lochiel Road, Hilton, was subsequently acquitted of behaving in a threatening and abusive manner.

Does modern Scotland, founded by the fiery preacher John Knox, really have no place in it for a man like this? 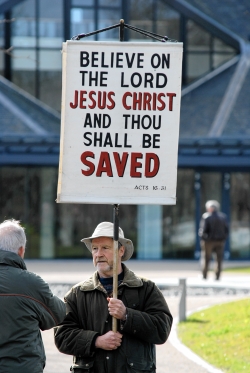 UPDATE: 25th September.  The Perth Courier has a follow-up story on the man who queried the “arrest that wasn’t an arrest” (according to the police):

Joe McLoughlin, 43, stepped in when police ordered Mr Williamson to stop his sermon because he was “too loud”.

The pair were driven to Perth police station where officers attempted to issue Mr McLoughlin with a £40 fixed penalty notice. But the Letham resident, a full-time carer for his elderly mother, refused to sign the paperwork and plans to take legal action against Police Scotland.

He said: “I did not accept. I refused this ticket. I don’t feel like I was properly charged with anything. They talked about breach of the peace, obstructing justice and section 13 of the public order act. They’ve left me in confusion. I don’t know what I was arrested for.

“I’ve made a statement and it’s in the hands of my solicitors.”

Mr McLoughlin claims officers were heavy-handed when he refused to stop speaking up for the clergyman. He said: “One of them put my hand up my back and frogmarched me to a van. He told me now I am being arrested for ‘making a fool of myself in the f*****g High Street’.”

A police spokesman said: “We can  confirm that a 43-year-old man was arrested and subsequently issued with a fixed penalty notice following an incident in Perth High Street on September 18.”

Despite his ordeal, Mr McLoughlin was back in the High Street yesterday, bible in hand, preaching to passing shoppers.

He said: “It’s 10 years since I did this and you could say I was inspired by Josh. The thought behind it is, if we don’t use this right we’ll lose it.

“It’s given me an incentive to go back out on to the streets and I got quite a positive reaction. A couple of people stopped and spoke to me.”

This is all very bad.  It is horrible to see this level of police incompetence and unprofessionalism, all of it merely to harass some harmless street preachers.

UPDATE: The story now appears in the Daily Express, and the Scotsman.

13 thoughts on “More on the “arrest” of Josh Williamson”