One of the sights of Constantinople before the Ottoman conquest was the colossal equestrian statue of Justinian, standing in the Forum Augusteum, atop a 100 foot-tall pillar outside the senate house.  The statue faced east and was widely thought to have magical powers to repel invaders from that direction.

At Robert Bedrosian’s site I have found a treasure-trove of articles about Byzantium.  One of these, on ancient statues in medieval Constantinople,[1] contains a fascinating portrait of the statue:

One of the oldest was the equestrian statue which Justinian set up of himself ; it is described by Codinos. The horse was on the top of a column, and the emperor held in his left hand the ball and cross, signifying his universal dominion over the earth by the power of the faith of the cross.[2]

“The right hand,” says Codinos, “he has stretched out towards the east, signifying that the Persians should halt and not come over to the land of the Greeks, crying by means of the repelling gesture of his uplifted hand,’Stay, ye Persians, and do not advance, for it will not be to your good ‘.”

The idea is as old as the time of Justinian himself, for it is found in the contemporary historian Procopios, who says that the statue, “was riding, as I think, against the Persians.” The gesture of his right hand was to forbid the advance of the eastern barbarians.[30]

The latest notice of this statue we owe to Bertrandon de la Broquiere who saw it in 1432 ; by his time the Persians had been superseded by the Saracen holders of Jerusalem, and he says that the figure has “le
bras droit tendu et la main ouverte devers la Turquie et le chemin de Jherusalem par terre, en segne que tout celluy pays jusques en Jherusalem luy souloit estre obeyssant.”[31]

It was destroyed about 1525, shortly before the visit to the city of Gyllius, who saw fragments of it of gigantic size “carried into the melting Houses where they cast their Ordnance.”[32]

[29] Codinos, 28.
[30] Procopios, De Aedificiis, 182, especially lines 14 and 20. The idea spread to Europe and is found in John of Hildesheim, edition quoted, p. 274, and also in Arabic authors: Qazwini in the thirteenth century says that there were two opinions, and some said that the hand held a talisman to keep off enemies, and others that on the ball was written, “I own the world as long as this ball is in my hand” (J. Marquart, Osteurop. und ostasiatische Streifzuge (1903), p. 221). Harun ibn Yahya in the ninth century thought that the right hand was beckoning people to come to Constantinople (ibid. p. 220). An old drawing of this statue connected with the name of Cyriac of Ancona was found by Dothier in the library of the Seraglio. It has often been reproduced, and may be seen in Rev. des etudes grecques, vol. ix. p. 84.
[31] Bertrandon de la Broquiere, Le Voyage d’Outremer, publie par Ch. Scheffer (1892), P. 159.
[32] Gyllius, The Antiquities of Constantinople (translated) (1729), p. 129.

I did try to locate that drawing.  But this is harder than it might be.  Thanks to AWOL, I learn that REG is online here.  But this does not go back so far as vol. 9.  Archive.org list the volumes here, and vol. 9 (1896) is here.  Unfortunately page 84 is missing!  The Gallica collection of microfilms is here; but the series is incomplete and does not include the relevant parts of vol. 9.

I did find a drawing at Wikimedia Commons, however, which looks like a modern redrawing.  Note the inscription “THEODOSI”, suggesting – inevitably – reuse of an older statue by Justinian: 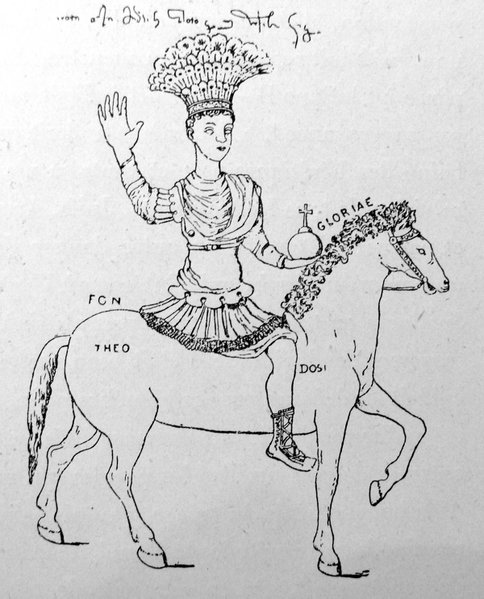 The volume of Gyllius – Pierre Gilles – is accessible online, however, and his description is worth hearing:

Chap. XVII. Of the forum called the Augustaeum, of the pillar of Theodosius, and Justinian, and the Senate-house.

Procopius writes that the forum which was formerly called the Augustaeum was surrounded with pillars and was situated before the imperial palace. Not only the forum is at present quite defaced, but the very name of it is lost, and the whole ground where it stood is built upon. The palace is entirely in ruins, yet I collect from the pedestal of a pillar of Justinian lately standing, but now removed by the Turks, which Procopius says was built by Justinian in the Augustaeum, and Zonaras in the court before the Church of Sophia, that the Augustaeum stood where there is now a fountain, at the west end of the Church of St. Sophia. Suidas says, that Justinian, after he had built the Church of St. Sophia, cleansed the court, and paved it with marble, and that it was formerly called the Forum Augustaeum; and adds, that he erected his own statue there. Procopius writes, “That there was a certain forum facing the Senate House, which was called by the citizens the Augustaeum; where are seven stones, so cemented together in a quadranglular manner, and are so contracted one within another, the upper within the lower stone, that a man may conveniently sit down upon every projecture of them.”

I was more induced to give this account from Procopius of the pedestal because I do not find it in his printed works. Upon the top of it, says he, there’s erected a large pillar, composed of many stones covered with brass, which did at once both strength and adorn them. The plates of brass did not reflect so strong a lustre as pure gold, yet was it, in value, little inferior to silver.

On the top of the pillar was set a large horse in brass, facing the east, which indeed afforded a noble prospect. He seemed to be in a marching posture, and struggling for speed.  His near foot before was curvated, as though he would paw the ground; his off foot was fixed to the pedestal, and his hind feet were so contracted, as though he was prepared to be gone.  Upon the horse was placed the statue of the emperor: it was made of brass, large like a colossus, dessed in a warlike habit like Achilles, with sandals on his feet, and armed with a coat of mail, and a shining helmet.  He looked eastward, and seemed to be marching against the Persians.  In his left hand he bore a globe, devised to signify his universal power over the whole world.  On the top of it was fixed a cross, to which he attributed all his successes in war, and his accession to the imperial dignity. His right hand was stretched to the east, and by pointing his fingers, he seemed to forbid the barbarous nations to approach nearer, but to stand off at their peril.

Tzetzes, in his “Various History”, describes what kind of helmet he had upon his head. “The Persians,” says he, “generally wore a turban upon the head.  When the Romans obtained any victory over them, they plundered them of their turbans, which they placed upon their own heads. These are,” says he, “of the same shape with that with which the statue of Justinian, erected upon a large pillar, is crowned.”  Cedrenus relates that Justinian held the globe in his silver hand.

Zonaras writes that Justinian, in the seventeenth year of his reign, set up this pillar, in the same place where formerly had stood another pillar of Theodosius the Great, bearing his statue in Silver, made at the expense of his son Arcadius, which weighed 7,400 pounds. When Justinian had demolished the statue and the pillar, he stripped it of a vast quantity of lead, of which he made pipes for aqueducts, which brought the water into the city. This ill-treatment of Theodosius by Justinian was revenged upon him by the barbarians; for they used his pillar in the same manner, and stripped it of the statue, the horse, and the brass with which it was covered, so that it was only a bare column for some years.

About thirty years ago the whole shaft was taken down to the pedestal, and that, about a year since, was demolished down to the base, from whence I observed a spring to spout up with pipes, into a large cistern. At present there stands in the same place a water-house, and the pipes are enlarged.

I lately saw the equestrian statue of Justinian, erected upon the pillar which stood here, and which had been preserved a long time in the imperial precinct, carried into the melting houses where they cast their ordinance. Among the fragments were the leg of Justinian, which exceeded my height, and his nose, which was above 9 inches long. I dared not measure the horse’s legs, as they lay upon the ground, but privately measured one of the hoofs and found it to be 9 inches in height.

An article by J. Raby references Ottoman sources, to show that the statue was taken down by 1456.[2]  This also gives a copy of the drawing, and indicates its present location: Ms. Budapest, University library 35, fol.144v, which is a miscellaneous manuscript.

One thought on “The brass statue of Justinian in Constantinople”