I’ve been back working on the Mithras site in the evenings, and in particular looking at Mithraea found in recent years.   I’ve created a page for these, and I’m going through them.

Last night I was searching for material about the Hawarte Mithraeum in Syria.  The site was a 5th century church, excavated in the 1970’s.  The floor of the church was bowed near the altar, where a mosaic was removed.  Some time in the mid-90’s, the floor collapsed revealing a painted chamber underneath.  Robbers were quickly on the scene, and their attempts to sell fragments of painting came to the attention of the authorities.  Michal Gowlokowski happened to see photos of some of the paintings and realised that the chamber must be a Mithraeum. He the Polish Archaeological Mission reached an agreement with the Syrian authorities, and excavated the site.  Pleasingly, all their annual reports are online in English here!

The paintings are 4th century, which makes them some of the latest Mithraic monuments.  They are also rather spectacular, as this blog (in Polish – but try using Google Translate on it) indicates!  A sample image:

Here’s another image, of a fresco restored by the Polish conservation team.  The image seems to have been digitally enhanced for sale, but in the process has revealed additional data, especially the face of Luna at top left: 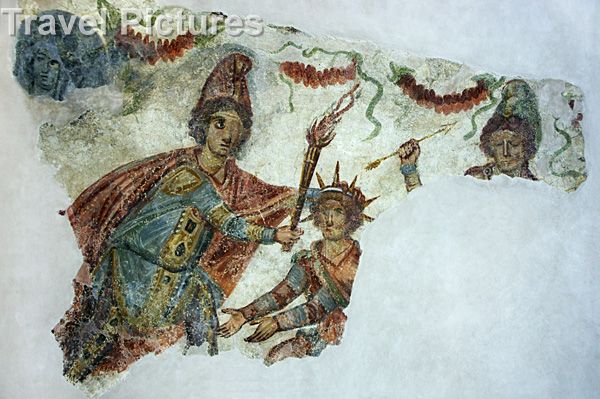 Here’s a picture of the inside of the Mithraeum from the conservators blog here: 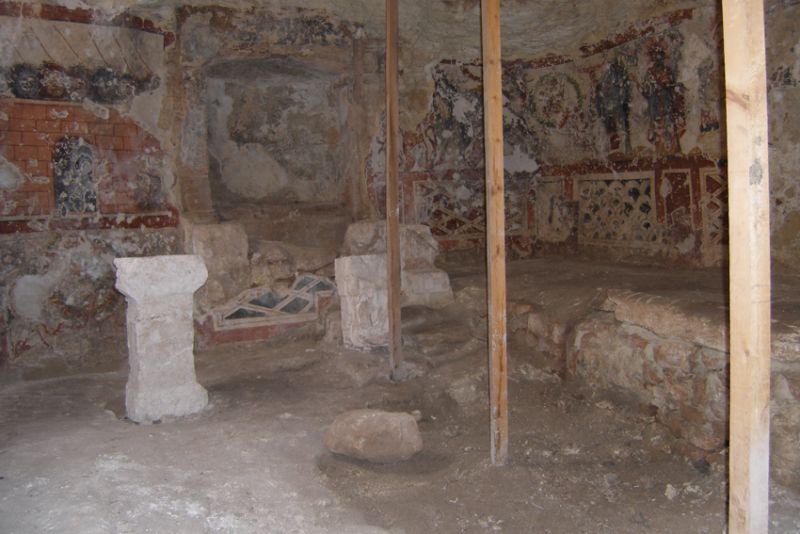 I’m collecting images and data, and I need to write all this up.  But notice on the left of this image a city wall, surmounted by the heads of demons, each being struck by rays (of light?).  The detail at Hawarte is better than this photo may indicate.  It adds something to our knowledge of the myth of Mithras.  At Hawarte, it begins with the war of Zeus against the Giants, followed by the birth of Mithras and the usual story, and ending with a depiction of the city of demons and the demons being killed by the light of the (unconquered) sun.

More interestingly still, Dr Gowlikowski has managed to demonstrate a connection between Mithras and the winter solstice, the 25 December.  For it seems that the chamber was so arranged that a ray of light would shine on Mithras’ face a couple of hours before sunset on that day.[1]  However I need to read into this with some care, and make sure that I understand the argument!

One can only praise the Polish team for their exemplary work in preserving and restoring the site.  The paintings are today at the museum in Hama.  Let us hope that they are safe!

12 thoughts on “A ray of light for Mithras at Hawarte on the 25th December?”