Today I came across an image which, although striking, was previously unknown to me.  It can be found on Wikipedia here, and in other places.  It depicts Theophilus of Alexandria, standing atop the Serapeum at Alexandria:

The destruction of the Serapeum in Alexandria in 392 AD – the date is not precisely certain – at the hands of a mob, incited and led by the patriarch Theophilus, was an iconic moment in the end of paganism and indeed of antiquity.

The image above comes from the remains of a papyrus codex, once the property of Russian Egyptologist and collector Vladimir Golenischev. Today it is in the Pushkin Museum of Fine Arts, with the other Golenischev papyri.  The codex may be as early as the 5th century AD, although others date it later.  It contains the remains of a Greek text, the Alexandrian World Chronicle.

The text and images were published – in colour! – in 1905 by Bauer and Strzygowski,[1] and, even better, the publication is online at the German digital library here.

The page of the publication from which the image comes is here.  A local copy of the page is below (click for full size image):

The text in grey is reconstructed by Bauer, although the later discovery of an additional fragment has verified at least some of his text.

Fortunately Richard Burgess has placed on Academia.edu here a paper which discusses this page in great deal.[2]  He gives a translation of that page, as follows, and I have abbreviated some of his very interesting notes for the general reader:

In this year with his son
Honorius Theodosius arrived
in Rome and crowned him
emperor on 13 June and
gave a congiarium to the Romans.
108. Augustus Valentinian IIII and
Neoterius vir clarissimus, when
[…] was augustalis.
Tatianus and Symmachus
viri clarissimi, when Evagrius was augustalis.

In this year Valentinian
died in Vienna
on 10 June and Eugenius
was proclaimed emperor
on 22 August,
which is 23 Thoth.
109. Augustus Arcadius II and Ru-
finus vir clarissimus, when the same
Evagrius was augustalis
of Alexandria.
In this year […] Eugenius
was executed on 6 January,
which is 8 Thoth, and in the same
year… [the codex ends here]

There are also titles above the figures: the one of the left has “Saint Theophilus”, while the kneeling figure is the luckless “Eugenius”.

The picture shows Theophilus standing on top of a façade with columns and a triangular entrance, which is painted in blue and yellow.  In the entrance is the bust of a beardless man with curly hair and a “modius” jar on his head.  This is characteristic of Serapis, and temples are often represented by a few columns and the cult image, so this is not necessarily an exact picture of the temple.  It would be interesting to wonder if the colours represent something real about the painting of the temple, tho.

Note also the colour of the statue – the face is blackened.  This confirms a statement by Clement of Alexandria in his Exhortation to the Greeks, ch. 3:

He gave personal orders, therefore, that a statue of Osiris his own ancestor should be elaborately wrought at great expense ; and the statue was made by the artist Bryaxis, — not the famous Athenian, but another of the same name, — who has used a mixture of various materials in its construction. He had filings of gold, silver, bronze, iron, lead, and even tin ; and not a single Egyptian stone was lacking, there being pieces of sapphire, hematite, emerald, and topaz also. Having reduced them all to powder and mixed them, he stained the mixture dark blue (on account of which the colour of the statue is nearly black), and, mingling the whole with the pigment left over from the funeral rites of Osiris and Apis, a he moulded Sarapis; … [3].

At bottom right is a building, again with a triangular façade painted in blue and yellow, with two white columns to the left, and a roof in blue at the right.  Below the façade the “modius” appears again … so this is again the Serapeum, and this is confirmed by the caption to the left, “[Sa]rapitos to [i]eron”, the “Temple of Serapis”.  This designation for the Serapeum of Alexandria appears elsewhere in ancient literature.  Two figures stand to the left of the temple, dressed in grey-blue tunics with arms upraised; some have thought these to be monks throwing stones at the temple.

The entry in the Chronicle that described the destruction of the temple is sadly missing.  But it must have stood there, for there is no reason otherwise for these pictures to be there.

St Theophilos, gospel in hand, standing atop of Serapeum in Alexandria from the so-called Alexandrian World Chronicle, prob. 6th C. It is an extraordinary example of a late antique illustrated papyrus. 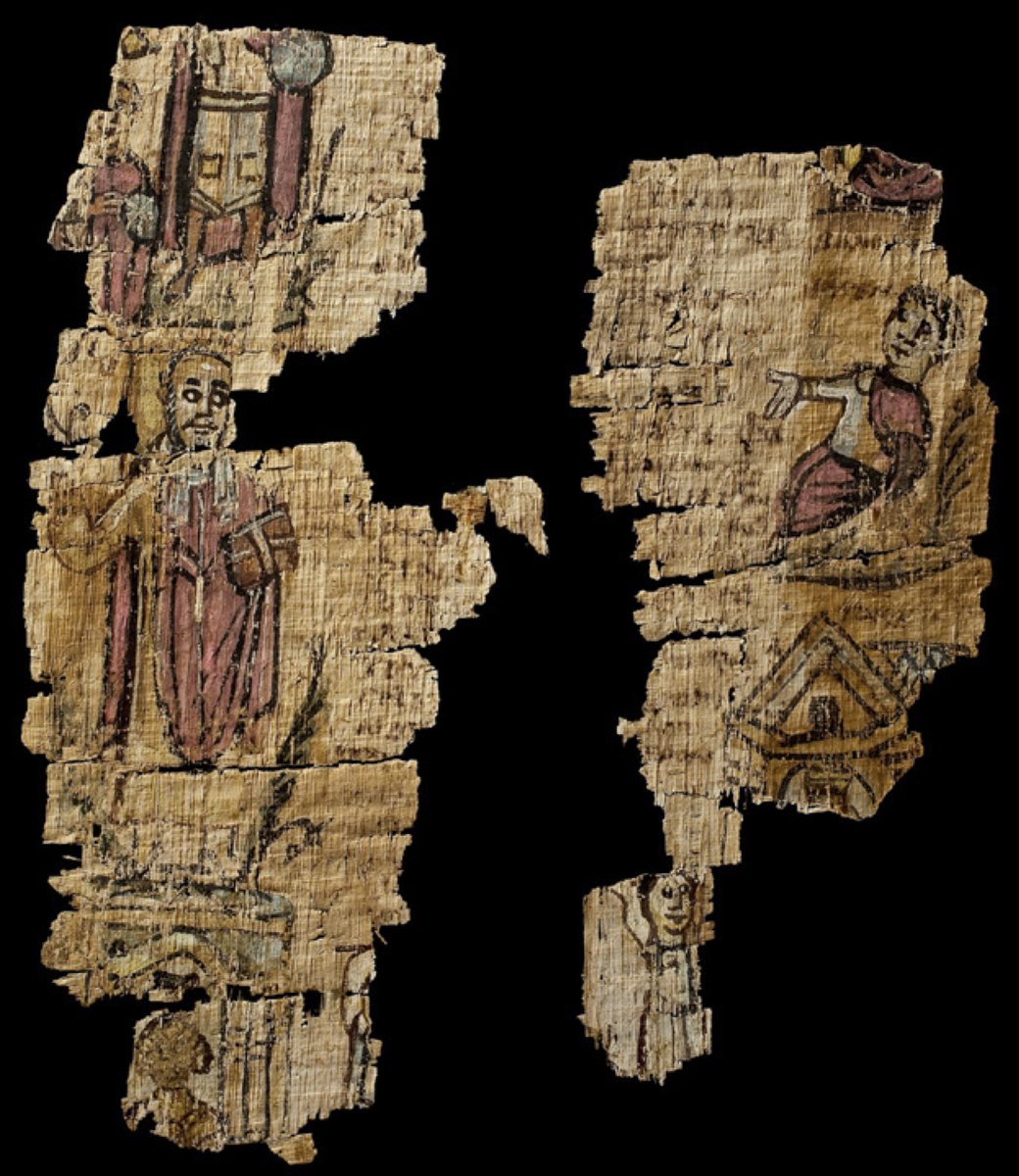