The destruction of the Serapeum in Alexandria in 392 AD by the Christian mob, headed by its leader, the patriarch Theophilus, is a famous moment.  It was the last temple to be closed, and by far the most famous.

It stood on the only high ground in the city, in the South-West.  Rufinus gives us a description of the destruction of the statue:

… a rumor had been spread by the pagans that if a human hand touched the statue, the earth would split open on the spot and crumble into the abyss, while the sky would crash down at once.

This gave the people pause for a moment, until one of the soldiers, armed with faith rather than weapons, seized a double-headed axe, drew himself up, and struck the old fraud on the jaw with all his might. A roar went up from both sides, but the sky did not fall, nor did the earth collapse. Thus with repeated strokes he felled the smoke-grimed deity of rotten wood, which upon being thrown down burned as easily as dry wood when it was kindled.

After this the head was wrenched from the neck, the bushel having been taken down, and dragged off; then the feet and other members were chopped off with axes and dragged apart with ropes attached, and piece by piece, each in a different place, the decrepit dotard was burned to ashes before the eyes of the Alexandria which had worshiped him.

Last of all the torso which was left was put to the torch in the amphitheater, and that was the end of the vain superstition and ancient error of Serapis.[1]

There is a rather marvellous article in the Journal of Roman Studies, by Judith S. McKenzie &c., that tells us.[2]  What it does is to sift both the literary and archaeological evidence, and a very fine job it does too.  In addition it gives some very useful pictures!  These, as ever, are worth a thousand words.

The site consisted of a large platform on top of the only hill in Alexandria.  A wall surrounded the platform, which was a colonnade on the inside.  The temple, a classical structure, stood inside the colonnade.

Here is a diagram of how the temple looked in the 3rd century.  The sea is to the North.

A hundred steps led up to the main entrance of the temple from the East.  Inside the entrance was a pool of some kind.  To his left, the visitor would have seen a building whose nature and appearance is unclear; the “south building”.

To his right he would see a classical Roman temple.  This was the temple itself, in which resided the wooden statue of Serapis.

The emperor Diocletian added a monumental pillar late in the same century, which still stands and is known as “Pompey’s Pillar”.  The temple then looked like this: 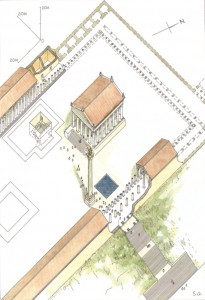 When the temple was destroyed, it seems that it was the buildings inside the colonnade that were demolished.  The main enclosure and its colonnade remained, and are mentioned by medieval Arabic writers, until, as we learn from Abd al-Latif, a governor under Saladin destroyed them in 1169.

The site of the Serapeum was not turned into a church, but became disused.  Two churches arose nearby, rather than inside.

Paganism in Alexandria did not die at once, of course.  The Life of Peter the Iberian, by John Rufus, in fact describes a pagan healing ritual which took place in the 5th century in this very same enclosure of the Serapeum.  We have also seen in the Life of Severus of Antioch, ca. 500 AD, that pagans made trips to the temple of Isis at Menouthis, still open even then.

I hope to explore some more of the footnotes of Dr McKenzie’s article, but I would like to conclude with some very interesting words from it, which appear at the beginning:

Reconstructions by archaeologists are often treated with scepticism by historians and literary critics. Thus, it is essential to present in detail the evidence on which these reconstruction drawings of the Serapeum are based, as well as the reasoning involved, in a way which hopefully is accessible to non-archaeologists.

This article must be the basis for anyone who wants to think about this ancient site.  Recommended.

One thought on “What did the Serapeum in Alexandria actually look like?”