The technical works of antiquity tend to be neglected.  I have written before about the astrological works which, although on a subject of limited interest today, really should exist in English.  And indeed some modern enthusiasts for astrology have made such translations, and perhaps are the only people today to make use of the works in a manner that their authors would recognise.

This creation of translations should be encouraged.  So I thought that I would signal another of these, a translation of Porphyry’s Ad Gaurum by Andrea Gehrtz, under the title of Ensoulment.  Full disclosure: I commented on a draft of the first chapter, and she kindly sent me a copy.

It is offline, unfortunately, but intended for a group of people who perhaps would not usually be interested in ancient texts.  It is available from here for a trivial price.[1]

The book is printed by Moira Press.  It is a slim, small paperback.  There is no introduction, but there is a glossary. 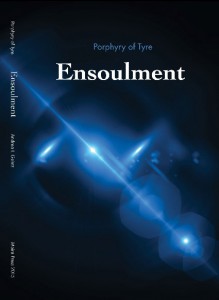 The subject is when an unborn baby acquires a soul.  Porphyry’s answer is “at birth”, apparently; an answer that ought to have provoked some coarse ribaldry about just how that works, but presumably did not.

The Ad Gaurum is only preserved in a single damaged 12th century manuscript, found on Mount Athos by the conman Minoides Mynas, and now in the French National Library as Ms. Paris Suppl. gr. 635.  The manuscript also is the only witness for Galen’s Introduction to logic.  The scribe was unfortunately rather careless, and also used extensive abbreviations, some apparently his own.  Finally the manuscript has suffered water damage to the top and outer edges, and the last few pages are half destroyed in this way.  Another manuscript does exist, Paris Supp. gr. 727; but this is just a transcript made by Mynas, with a few corrections of his own.  The standard edition is that of Kalbfleisch, 1895, who divided the text into chapters and sections (there are no divisions in the manuscript).  I gather that a team of French scholars led by Luc Brisson is at work on a new edition.

The manuscript attributes the work to Galen; but this cannot be right, for, as Kalbfleisch pointed out, it contradicts Galen’s teaching on the subject.  The attribution to Porphyry is based on the fact that the author is plainly a neo-Platonist, some indications that Porphyry held views stated in the text, and the statement of Michael Psellus that Porphyry wrote a work on this subject.

Interestingly there is a rebuttal of the work in a dialogue in two books entitled Hermippus (On Astrology).[2]  This however is a 14th century work, written by a certain Johannes Kareones – a profoundly obscure gentleman! -, who must therefore have been familiar with the manuscript.[3]

Andrea Gehrtz is to be commended for translating the work, and I hope that it enjoys a large sale, and that she undertakes more translations of ancient technical works.