In the 16th century there were a number of ancient monuments in Rome which have since disappeared.  Among these was a massive temple on the Quirinal Hill, which was generally thought to be the Temple of Sol Invictus dedicated by the emperor Aurelian in 274 AD, but today is thought to be the temple of Serapis.

As with many of these older monuments, drawings exist, and I have written a number of posts about them, such as this one.  But today I came across a colour painting of this monument.

It is by Willem van Nieulandt the Younger (1584-1635 ca.), View of the Forum Romanum.  Thankfully a copy is at Wikimedia Commons here.

The temple is circled: 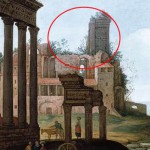 This drawing by Jan Goree, before 1704, is the same monument from roughly the same angle: 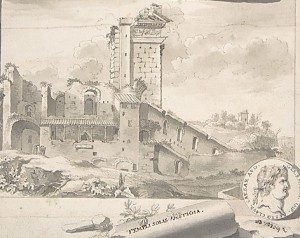 I wonder what other paintings exist of the vanished monuments in Rome.