Until 1940 Melito of Sardis was an obscure figure of the 2nd century AD, known mainly from Eusebius, who mentioned that he wrote a work on Easter.  In that year there appeared an edition and translation of On Easter (De Pascha).  It was based on a 4th c. papyrus codex which had come from Egypt.[1] This had been broken up, and portions of the almost complete text were in Dublin at the Chester Beatty library[2] while the remainder were at the University of Michigan.  A more complete text was published in 1960 from Bodmer Papyrus XII (start of the 4th c.),[3]  and a modern edition appeared in 1979.[4]

Coptologist Alin Suciu recently published pictures of manuscript pages on his facebook page, showing the start and end of the work.  I thought that many people might perhaps like to see them.

First the start of the work (following the end of Enoch), from the Chester Beatty codex.  Click on the image for a larger picture. 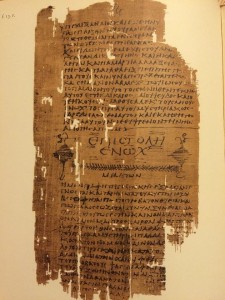 There is a large ENWX, then a line, and then MELITWN (Of Melito).  The title, however, is missing.

The Chester Beatty-Michigan manuscript is defective at the end, so we don’t know how the final portion of it looked.   But in the Bodmer manuscript, both the start and end of the work are present, and the name and title are shown in both places as Μελίτωνος Περὶ Πασχα.  I am told that in fact there is a title page with this on, before the first actual page of text.[5] 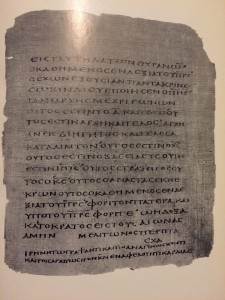 The work ends with MELITWNOS PERI PASXA.  This is followed by two lines which Alin translates for us:

After the subscription of the work, the scribe added a “colophon” (actually a scribal note): “Peace to the one who wrote, to the one who reads, and to those who love the Lord with sincerity of heart.”

UPDATE: My thanks to the correspondent who pointed out my mistake in supposing these images were from a single manuscript; and also that the Chester Beatty portions of the ms. are online here.