The biography and actions of the first twelve Caesars, from Julius to Domitian, were immortalised by a civil servant of the age of Hadrian.  Suetonius Tranquillus in his De vita Caesarum, On the lives of the Caesars, perhaps best known in English by the title of the Penguin edition, The Twelve Caesars, created a gossipy, colourful portrait that will prevail in the minds of men so long as his work is read.

But the work has not reached us in a complete form.  The preface is gone, and the opening sections of the life of Julius Caesar are likewise lost.  It seems that a single gathering of leaves, a quaternion, was lost from the ancestor of all known copies.  No manuscript known today, or known for centuries, contains this material.

In the sixth century, however, the Greek antiquarian John the Lydian was more fortunate.  Rummaging around the remains of Roman literature, and recording – in Greek – whatever he found worth remembering, he came across a copy of Suetonius’s classic work.

The copy that John the Lydian had included the prologue.  This included a dedication of the work to Septicius Clarus.

We know this, because of a few words in his work, De magistratibus populi Romani.  So I learn, from L.D.Reynolds marvellous work on the transmission of the Latin classics, Texts and Transmissions (p.399).

Unfortunately Reynolds leaves vague where John the Lydian says this, giving a reference to the old 1858 edition of Suetonius by Roth, p.x-xi.  Roth does not trouble to tell us in these words precisely where he found this information: but on p.286 we find this excerpt: 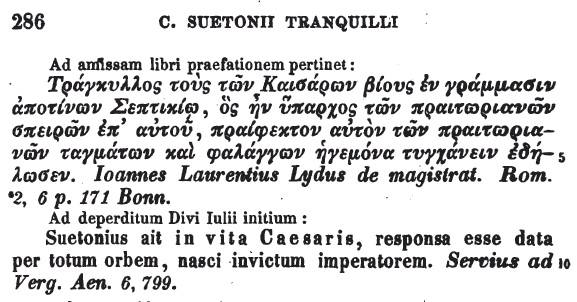 In accordance with the infuriating referencing practice of his age, Roth vaguely refers to the “Bonn” edition.  Fortunately this also is online – the Corpus Scriptorum Historiae Byzantinae 29, 1837, – and so it can be referenced, although – curiously – the Bonn edition actually reads somewhat differently at a critical point!  It gives “Septimio” instead of “Septicio”.  But the low quality of the CSHB text is notorious.

If instead we consult the 1903 Teubner edition of Lydus, by R. Wunsch,[1] on p.61, we find the passage given as above.  Indeed Roth advises us that the Septimio/Septicio variant arises merely from an editor’s error in misreading a manuscript.[2]

The passage may be found in De Magistratibus, book II, chapter 6.  There is an English translation by Anastasius Bandy, which sadly I have no access to.  So let me just give the relevant words:

So Tranquillus dedicated the lives of the Caesars to Septicius, who then was prefect of the Praetorian cohort…

This “Septicius” can only be Septicius Clarus, whom Roth tells us held that post from 119-121 AD.  This dates the publication of The Twelve Caesars to ca. 120 AD.

From such slender threads do we gain just a little more information about one of the best-loved works of antiquity!

3 thoughts on “The lost opening of Suetonius’ “The Twelve Caesars”, in John the Lydian”