The vanished Roman fountain next to the Colosseum, demolished by Mussolini, but not before being photographed, is a long-term interest of mine.  In its later years, the monument was only half its former height.  But if we look at older paintings of the scene, we can see how it was during the 18th century.

A correspondent, Ezio, has sent in a useful list of links from which I have extracted the following images.  Click on the image to see it properly.

Let’s start with a 1694 painting by Jacob de Heusch, on Wikimedia Commons. 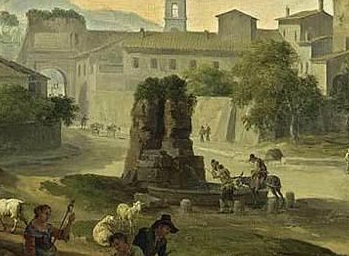 This shows the Meta Sudans, with the vegetation on the top which is characteristic of the monument before it was reshaped in the 19th century.  In the background is the Arch of Titus, as it was before Valadier extracted it from later buildings, and the entrance to the forum.

In Heusch’s painting, the fountain is still in use!  But I fear that this is artistic licence, just as his depiction of the Colosseum is.  So we don’t learn much from this except that the interior on this side was already gouged out, presumably by treasure hunters.

Next we have Caspar van Wittel’s paintings from 1707-1711, one of which I have shown before in a low-resolution form.  These are here, here, and here.  Let’s show the Meta Sudans from the first of these, against the background of the Arch of Constantine (so on the other side): 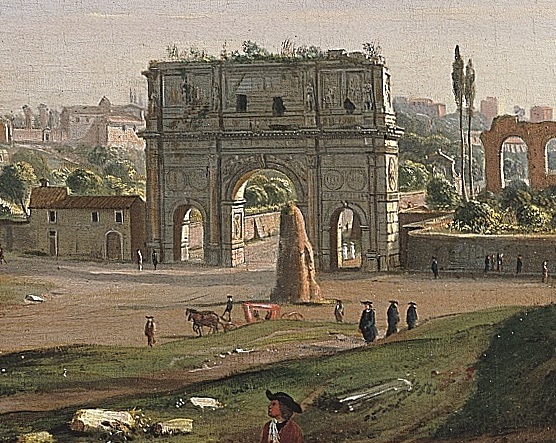 I have auto-leveled the colours, so that we can see it clearly.  This has no vegetation, but shows a tall, slender monument which has been gouged on the side facing the Arch of Titus also.

The third picture is from the same angle as the Heusch painting: 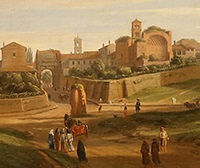 Sadly the online image is still low resolution; but this shows the vegetation at the top, the bulge part way up, the gouged out interior, and the Arch of Titus in the background.

Finally let’s see the painting by Panini (1747), which I have shown before, but this time at a decent resolution. 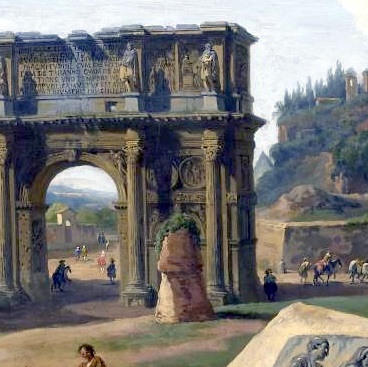 Again I have auto-leveled this.  It shows that the vegetation starts at the top and trails over towards the Arch of Constantine.  The bulge around the middle – which appears on ancient coin depictions – is present clearly.

Thank you Ezio for these!

It is really worth tracking down these old paintings.  They show a Rome that no longer exists, and there is historical data to be gleaned from them.

4 thoughts on “More paintings of the Meta Sudans”