I’ve spent a little time looking for information about the ancient Egyptian deity who lies behind the Greek figure of Harpocrates.

The results are discouraging, because I find so very little.  Admittedly I have no access to Egyptological databases; but I can’t help feeling that if there was much more to know, that the articles that I have read would tell me so.

It’s as if we really don’t know that much about large sections of ancient Egyptian mythology. Can that be so?

It seems that the word “Harpocrates” is in fact just the ancient Egyptian word “Harpekhered”, rounded off with a Greek ending.  The actual word is without vowels, and may be transliterated variously, such as Hor pe khrod, or Har pe khered, or Heru p xrat, depending on how we vocalise the name.  It means simply “Horus the child”.[1]

Obviously we would all want to see this name engraved on a monument, attached to a statue or relief of the deity.  This would give us a clear indication of how Harpekhered was depicted.

They do seem to exist – at least, the Meeks article to which I will refer in a moment says that they do.  But I have been unable to find a photograph of any such monument.  In fact he also says that depictions of the god appear with someone else’s name on the bottom.  Someone like Rameses, for instance.  That’s not very helpful.

But I was able to find a hieroglyphic representation of the name.  In Budge’s dictionary,[2] the entries for “Harpokrates” are: 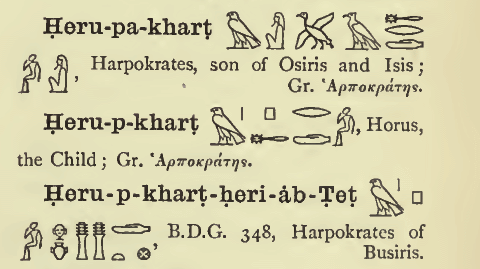 The middle one is the one we want.

Note the last glyph in the name is of a child, putting its finger to its lips.  Doing a search for “child” at http://www.hieroglyphs.net shows me: 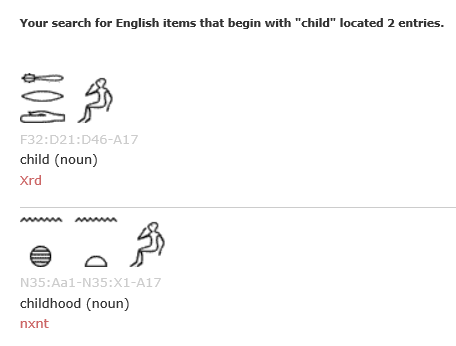 At the start of the name is the hawk, which Wikipedia (shudder) tells me is the sign for Horus himself.

So the characteristic depiction of Harpekhered and of Harpocrates is simply derived from the hieroglyph for “child”.  So we get statues like this:

Harpekhered appears in the Old Kingdom Pyramid Texts[3] and here is one of them, taken from the pyramid of Teti at Saqqara:

The best information that I could find was in an article online by Dimitri Meeks on the Egyptian iconography of Harpokrates.[4]  From this I learn that the “iconographic type is considered a depiction of the new born sun god”; that the actual name first appears late on in Egyptian history, in the 21st dynasty, ca. 1070 BC.  It first appears associated with the iconography of Harpokrates in the 22nd dynasty, in the reign of Sheshonq III (835-785 BC).  The name of Harpokrates appears for the first time in Phoenician and Aramaic in the 5th century.

But … did people worship Harpekhered?  Well, there are lots of statues around.  What did they do to worship him?  Well, I don’t know.  Do we even know?  Was there a priesthood?  I see no information on this.  Was there a mythology?  I haven’t seen any sign of one.

All we seem to have is the name… meaning Horus-the-child.  The rest appears to be modern guesswork.

Here I find myself stumped.  Possibly an Egyptologist, reading this, would guffaw and say, “Well why didn’t you consult xxxxx?”  But of course I don’t know anything about xxxxx.  The Reallexikon of Bonnet is not online, as far as I know; or I would consult that to see if it gave primary sources.

Faced with this, there is not much we can do.

If we go back to Acharya S, Christ in Egypt, and look at references to “Harpocrates”, with what knowledge we have been able to glean, we find, as usual, only secondary sources, of doubtful value.  This is asserted to “be” that, it is argued; this looks like that, so this is that, or this must be derived from that.  Unfortunately without a proper database of ancient Egyptian sources, we are no further forward.