The buried Roman city of Pompeii was rediscovered in 1748, and excavations for antiquities have continued ever since.  Modern archaeological methods only originate around 1880 with Flinders Petrie in Egypt; so a great deal of work was done under conditions that all of us today would lament.  Sometimes this means that we cannot be certain of what was truly found.

I read in the last few weeks an article by Wayment and Grey in the JJMJS, revisiting the primary evidence for a famous but largely forgotten find; that of a graffito which mentions the Christians.[1]  The original discovery and publication were such a mess that the item has largely been forgotten or dismissed as imaginary.[2]  The authors go back to the sources, to try to shake out what, if anything, can certainly be said.  It seems to me that they do a fine job.

The actual sequence of events seems to have been as follows.

In 1862 the Neapolitan excavator Giuseppe Fiorelli and his team excavated a large building in the less-reputable side of Pompeii, opposite one of the larger brothels.[3]  It had two entrances, and was described as a caupona, an inn.  In the atrium he found a bit of graffiti, drawn in charcoal on a wall.  This apparently included the word “Christianos”, on the basis of which Fiorelli grandly named the building the hospitium Christianos, the hotel of the Christians.

Before it was completely destroyed, another Neapolitan scholar, Giulio Minervini, a few days after the find,

“warned of the finding, rushed to Pompeii and . . . with diligent care and without any concern to read a meaning rather than another, sketched the signs appearing on the wall.”

Shortly afterwards a German scholar, Alfred Kiessling, also visited the site and transcribed what he could see.  He also published the existence of the find, and that it had already disappeared.

Two years later in 1864 G.B. de Rossi visited the site and confirmed that the graffito was not now to be seen.  But he obtained from the lax Fiorelli a statement of what the inscription had said when he saw it, and also a copy of Minervini’s sketch of the item, and Kiessling’s.  He published what he had, in a not too coherent manner.[4]

The formal edition of the graffito was printed in the Corpus Inscriptionum Latinarum (CIL IV. 679).  Unfortunately this was rather a mess, based on the sketch by Kiessling, who saw it only when it was on the point of disappearing, and containing features not found in any of the sketches.

The end result was three transcriptions, plus an edition, all differing very significantly and some not even containing “christianos”.

Furthermore anybody who has looked at ancient graffiti even a little – or even damaged painted texts like those in the Mithraeum of Santa Prisca – will be very well aware of how difficult it is to read them, and how subjective the readings tend to be.

Finally, and exasperatingly, there were not lacking those fools who, based on this, made up entirely imaginary “pious” fairy-tales about a “hotel of the Christians”, a neighbouring Jewish hotel, the presence of St Peter and St Paul, and every element of hagiographical invention.  There are various “cross” items in Pompeii, which have been seen as evidence of a Christian presence, without any adequate justification; and likewise the mysterious ROTAS square, of which the same can be said.  There are certainly people capable of seeing evidence of Christians in contexts which actually do not support them.  Older Italian literature – and much of the literature on this item is Italian, and also difficult to access – is particularly prone to this kind of excess, in my experience.

In the circumstances it seems entirely natural to consign so dubious an item to obscurity.

The charm of the Wayment and Grey article is to sweep all this dross out of the way.  Instead they try to locate the original sketches, and then to do some real, modern archaeology to determine precisely what the building actually could, or could not, tell us, about its function.

The results are really very interesting; although of course we must see what the specialists think of this.

The first element in this was to place the materials in due order.

Wayment and Grey give the Minervini sketch as follows: 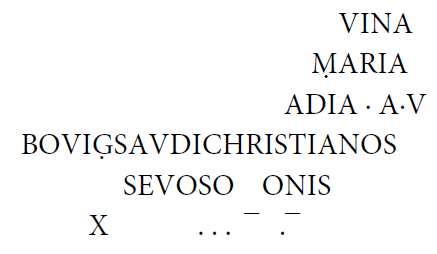 The Kiessling version, after a few days, they give as this, only covering the last two lines:

Seen in this order, it is evident that the rain has washed away the C of Christianos, and part of the S, creating I.  Most of the other differences are likewise explicable as the effect of weathering; although not the mysterious appearance of the 8X at bottom left, which Kiessling could see but Minervini did not.

In 1962 Guarducci attempted to clarify the meaning of the inscription.[5]:

With “sevos” read as “saevos”. The name Bovius is rare but attested.  The graffito then becomes a jeer, of a kind not unfamiliar to us all.

The authors go on to offer a fresh critical edition of the material; and also to investigate the house, which they find unsurprisingly to be a dodgy inn with a room also equipped for prostitution with a stone bed.  All this is valuable, and I can only refer the reader to it.

Is the inscription genuine?  I think we can be sure  that it did exist!

But did it really read “CHRISTIANOS”?  In my immensely unqualified opinion, there seems no good reason to suppose otherwise.  Three separate and reputable people saw it (and the CIL editor did not); and the differences in their transcriptions may be a consequence of weathering as the graffito decayed in the Neapolitan rain.

What can be deduce from this?  Well, not that much.  It means only that somebody in the area had something to say about the Christians, very shortly before ash buried the city of Pompeii.  Beyond that … it is quite hard to be sure.  But no harder than with many other written items, we should add.

But the wise man will await the verdict of the specialist.  All the same, the article is a nice piece of work, which gives us back something lost in confusion.  It also highlights how costly sloppy archaeology can be.

4 thoughts on “The “Christianos” graffito from Pompeii”