If you want to know about the origins of St George, it isn’t very long before you hear that a church inscription in Syria exists, dedicated to St George, and dating from the 4th century AD.  The details are often a bit vague; but the site is the town of Shaqqa or Shakka, ancient Sakkaia or Saccaea, sometimes called Maximianopolis, after the co-emperor of Diocletian.

Let’s have a look at this.

He says that the inscription was on a large stone, broken into two pieces, lying in front of the liwan of the sheikh.  The middle contained a cross in a circle which had been “hammered”.  He also says the text was better preserved when Burkhardt saw it.

Thanks to the genius of Pawel Nowakowski and the CSLA,  we can have a transcription and translation here, with an image of Burkhardt’s drawing:

+ The house of the holy prize-winning martyrs: George and his holy companions. From the offerings of bishop Tiberinos. (He?) built the sanctuary and the aisles (prostheke) of the church from the foundations. 15th indiction, year 263. By the efforts of the deacons Georgios and Sergios the Great.

I have highlighted the era in use, the ἔκτους τῆς πόλεως.

The question is what the year 263 might refer to, in years AD.  This is not simple.  Waddington suggested that it couldn’t be in the era of Bostra, which would make it 368 AD, as the indiction number was wrong.  But this was the only date Waddington attempted, and consequently it passed into literature.

Y.E. Meimaris, Chronological Systems in Roman-Byzantine Palestine, (1992) p.321, (online here), discusses several inscriptions from Shaqqa and attempts to work out the local era.  But in fact it was J. Koder and M. Restle who worked out that the era must start with the acclamation of Maximian Herculius as Caesar in 286.[2].

So year 263 of Maximianopolis would be 549 AD; quite a lot later than many books and websites suggest.

There is a wrinkle on this; that 549 is not the 15th indiction.  So we have to correct for this also; either the year is wrong, or the indiction is.  This gives a range of possible dates between 549 and 567.[3]

The actual inscription has not been seen since Waddington.  But it is the dedication of a church, and the remains of the building are known.  Pascale Clauss-Balty, “La kalybé de Hayat (Syrie du Sud)”, in: Syria: Archéologie, art et histoire, 85 (2008) (Online here) identifies it as one of a series of temple types called “kalybé”, some of them visited in the 19th century by Vogüé.  He adds (p.262):

In Byzantine times, the kalybé of Shaqqa was transformed into a martyrion dedicated to Saint George. Vogüé states that the altar had been placed under the dome, behind a wooden fence whose post-holes he could still see in the piers of the central bay. In front of the facade, there was also a kind of vestibule (pl. 11), the northern limit of which was to correspond to that of a levelled area still in place.

It is the lintel of the entrance to this vestibule which bore the inscription seen by Waddington in 1860 and which attributed to Bishop Tiberinus the construction of the small sanctuary, placing in the year 263 of the local era the completion of the works, i.e. in 549, 550 or 565. Butler merely reproduces the Vogüé plan and section and adds some minor information.

The sober profile of the mouldings, the resemblance with the kalybé of Umm az-Zeitun and the membership of the same program as the Kaisariyeh allow us to date the kalybé of Shaqqa of the 2nd half of the 3rd century.

This is good news, as we can have a look at the building.  Vogue is online, but the contents have been scanned poorly and the images are better in the Clauss-Balty article.[4]  Here’s the facade from the north and the floor-plan:

And here a modern image from the same article: 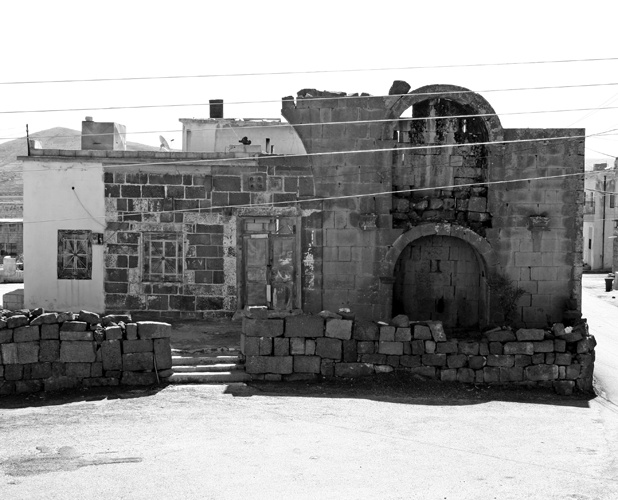 But it is easy enough to find more online.  Not sure who the author of the first one might be…? 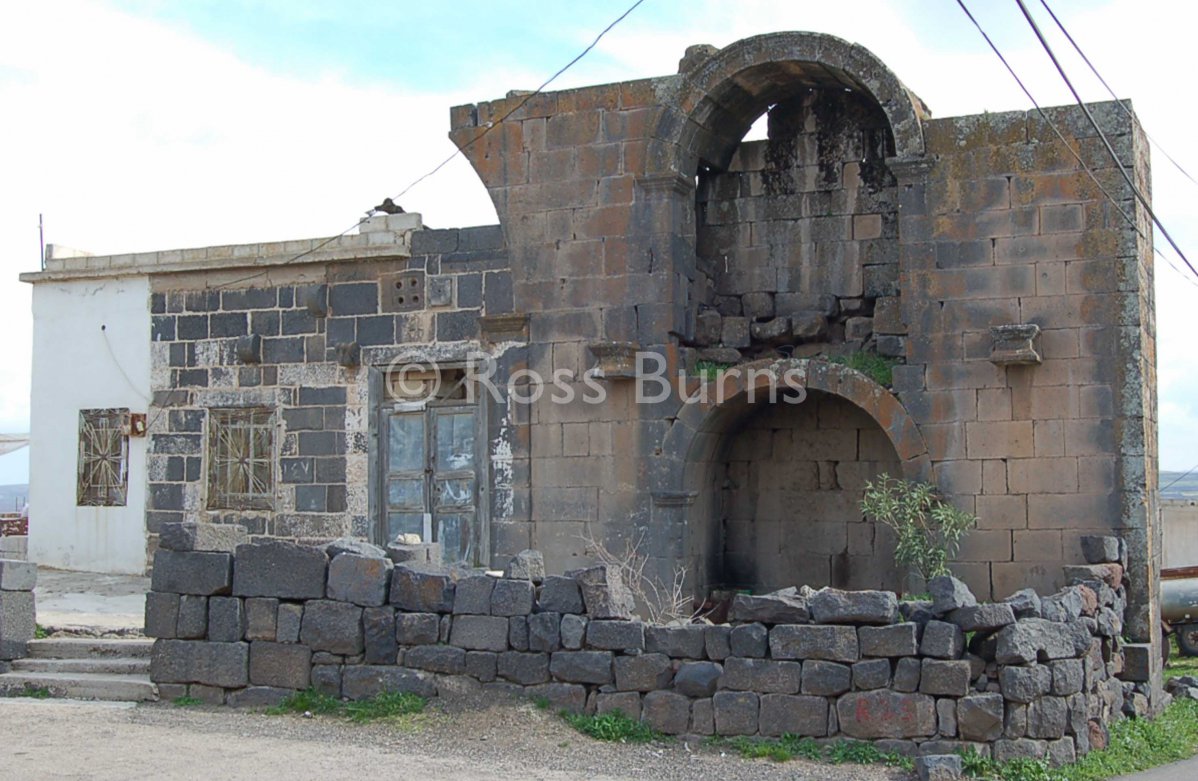 Ross Burns is in fact an author on Syrian monuments, and this comes from his website, monuments of Syria.  Googling using the Arabic name for Shaqqa (found on Wikipedia as “شقا“) produced a few more: 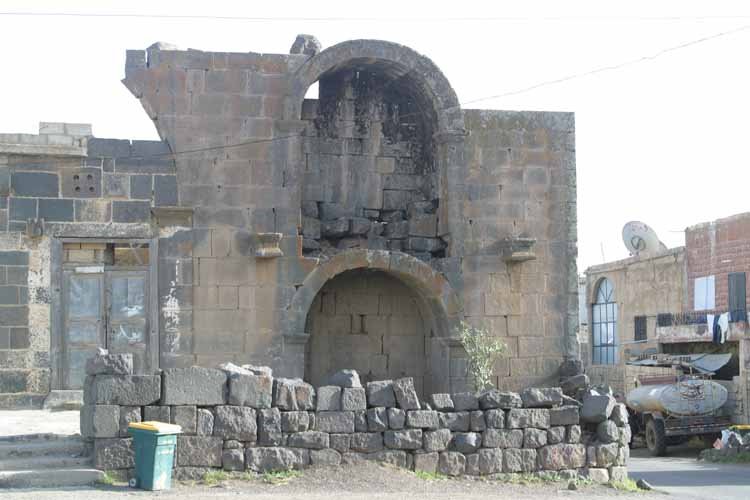 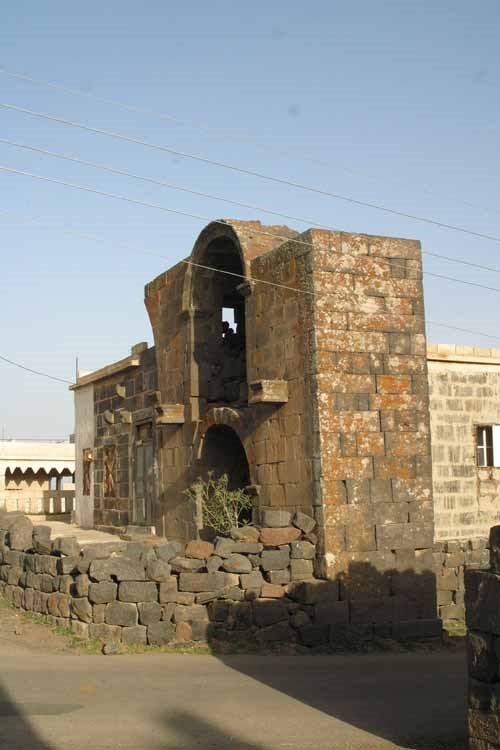 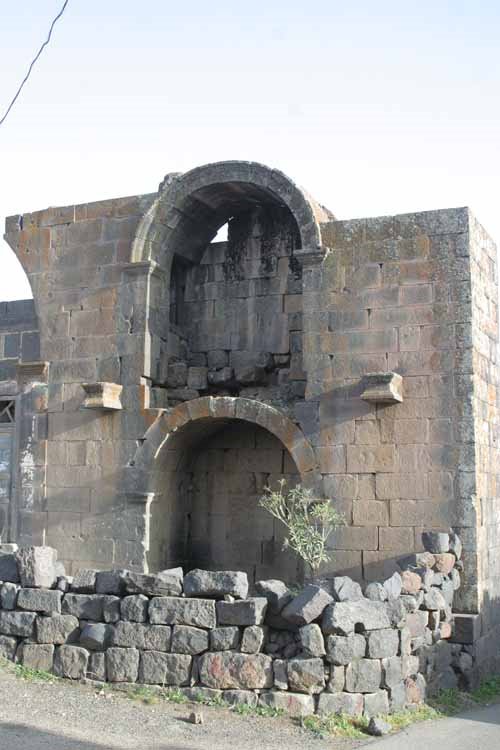 It looks as if the lintel was removed, the central arch collapsed, and the modern house was built in the ruin at some subsequent date.  Is the Vogue drawing a reconstruction, I wonder?  He states (vol.1 p.42) that the covering of the central aisle has fallen.  But the poor quality scan of the images makes it impossible for me to say.

I do wonder where that inscription is.  It’s probably in a wall, somewhere in the town.  If only one could visit and just ask!

It is interesting to see this pagan temple, rededicated to St George in the 6th century.  But the date of dedication is not the earliest known, in fact.  This we will discuss in another post.

2 thoughts on “Do we really have a 4th century inscription from Sakkaia / Shaqqa dedicated to St George?”