Back in October I received an email enquiring about the chapter headings in the manuscripts of Arator.  My first reaction, like yours, was to wonder who on earth was Arator!  So I thought that it might be interesting to give some information here about this obscure figure, and discuss the question posed to me.

Let’s start with Arator himself.  He lived in the early 6th century, in northern Italy, and wrote a single work, on the Acts of the Apostles, generally labelled Historia Apostolica, or sometimes De Actibus Apostolis.

Few perhaps are aware that a sixth volume of Quasten’s Patrology exists, covering the Latin authors from the end of vol. 4 up to the time of the Venerable Bede.  Sadly it exists only in Italian.[1]  Let’s hear what it has to say:

A little information on the life of this poet and his writings is given to us in the Variae of Cassiodorus and in the works of Ennodius. We know that he was originally from the north of Italy and that his father, perhaps a teacher of rhetoric and certainly a man of high culture, had provided for his early education. Following the untimely death of his father, he was taken care of by the bishop of Milan, Laurentius, and so the young boy passed, together with the great Ennodius, into the school of Deuterius, as we learn from one of the Ennodian dictiones (number 9). There in Ravenna he established a great friendship with Parthenius, nephew of Ennodius, and they began to study the classics, especially the commentaries of Caesar, but also Christian authors such as St Ambrose, “Decentius” (as a rule identified with Dracontius) and Sidonius Apollinaris. The Gothic ruler Theodoric had the opportunity to appreciate his eloquence on the occasion of his participation, perhaps in 526, in an Dalmatian embassy, and Athalaric raised him to the position of Comes domesticorum and Comes privatorum He went to Rome in an unspecified year and was named subdeacon by Pope Vigilius. For four days, between April 13 and June 1, 544 AD, he had the honor of reading his poem on the Acts of the Apostles in the Roman church of St. Pietro in Vincoli, in the presence of clerics and laity, with frequent applause and repeated invitations to read some passages again. After that all trace of him is lost.

Arator has left us a single poem in two books, the De actibus Apostolorum in which the two proemial charms are addressed to Florianus (12 couplets) and to Pope Vigilius (15 couplets); and the final metric epistle (51 couplets) is addressed to Parthenius. They are all one, if only for their illustrative character of the Aratorian poetics. Apparently the poem would appear to be a late product of that movement, inaugurated by Juvencus in the fourth century, whose obvious purpose was to excuse the rough simplicity of the biblical text by covering its contents with a metrically unexceptionable and stylistically elegant form; in other words to create a high-level Christian epic, up to the standard of the great classical tradition.

This cliché does not quite fit the Arator’s poem. In fact, Arator chooses only a few episodes of Acts, reserving the first book for those relating to Peter, and the second to those concerning Paul. He gives much space, in imitation of his predecessor Sedulius, to the allegorical and moral interpretation of the succinctly expressed events, as well as, in some cases, to the mystique of numbers. In essence, the poem fits more decisively into the didascalic strand than into the epic one. This explains and justifies the good fortune that it had in the Middle Ages, as evidenced by the numerous commentaries produced upon it between the ninth and tenth centuries.

That’s a rather wordy description, but clear enough for our purposes.  The successful public reading in 544 is known to us from a subscriptio to several of the manuscripts in which the work is transmitted.[2]

A deeply obscure English translation appeared in 1987.[3]  A modern French edition and translation exists in Les Belles Lettres series, and there is also a Portugese one[4]

There is apparently a complex manuscript tradition, as the poem was popular in the middle ages.  Unfortunately, lacking access to McKinlay’s edition, I can’t say anything about this.

But what about the table of contents and chapter titles, with which the original enquiry was concerned?  Well, the table of contents appears in the Patrologia Latina edition, which reprints the Arntzenius edition, but only in his introduction, in columns 58-9.  Apparently the capitula – the chapter headings – were still unprinted when McKinlay started work on his edition.[5]  Here’s the start of them: 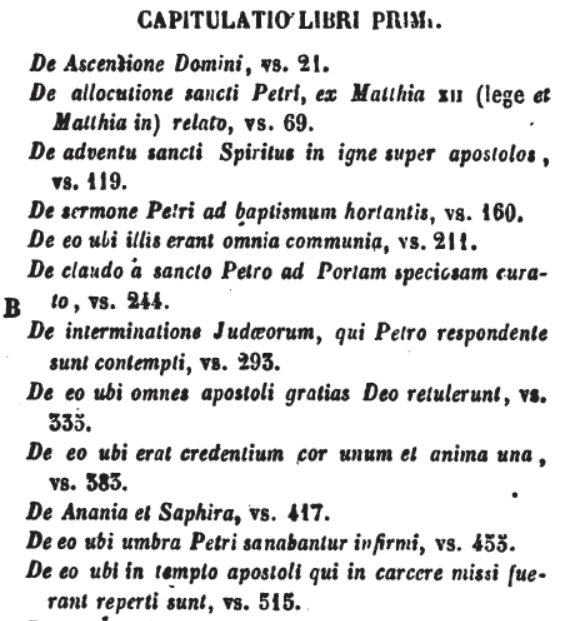 The verse numbers are no doubt modern.  My correspondent was asking about the unusual usage “De eo ubi…”, “Concerning that passage where”.  For the text is a retelling of the Acts of the Apostles, so it is perfectly reasonable to refer to the passage of scripture.

Notice how often the verb appears, not at the end as in ancient texts, but in the middle of the sentences, just as it would in a modern language.  This by itself suggests that the chapter titles are not ancient, but medieval.

McKinlay reviewed 20 manuscripts, for both the table of contents (‘tituli’) and the in-body headings (‘capitula’).  The tituli and capitula differ, as is very common.  Furthermore they were not revised capriciously by scribes, as might be supposed, but rather were handled not much less carefully than the main text.  Rather the manuscripts fall neatly into two groups. The text of the items was revised, at some point during their transmission, and made closer to the biblical text.  They predate 820 AD, when they appear in ms. Paris 12284.

It all tends to show that we need much more information on these meta-textual elements.  The statements in the handbooks that have always tended to skip over the headings as late (which they may be) and often corrupt (which they may sometimes be) need to be based on something other than anecdote.  In the last century we have seen much more care taken with these elements in the medieval manuscripts.  If this is done enough, one day a monograph will be possible which can survey the field.  But not yet!