A kind correspondent, David Blocker, has looked at the Lidar images that I posted, of the ruins of “Walton Castle”, the Saxon Shore Roman fort lying submerged near Felixstowe in Suffolk, and annotated them.  The results are fascinating: 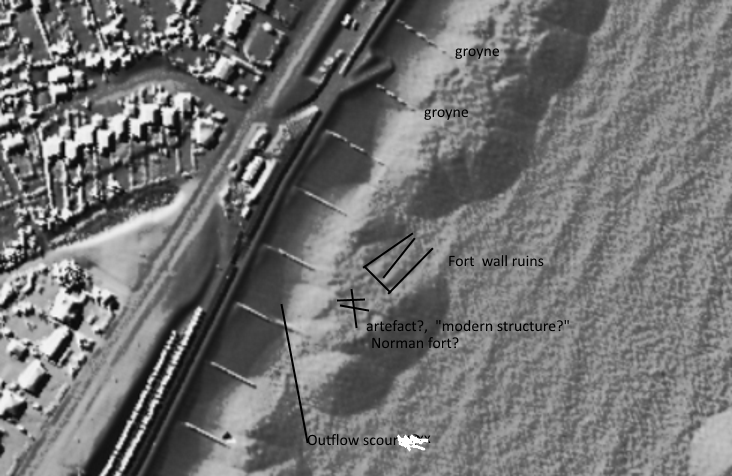 As a reminder, the rough sketch map drawn by the diver Jeff Errington: 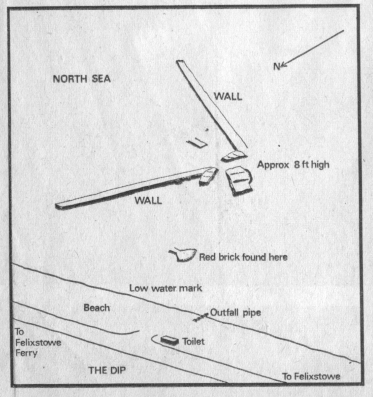 The lidar image of the Felixstowe area reveals the ruins of the Roman fort.

The lidar image roughly corresponds to the sketch made by the scuba club in the 1970’s.  There appears to be a shallow underwater channel between the beach and the offshore mound with the ruins, the groynes do not appear to be effective at retaining sand.

The lidar image hints at an under water structure  between the Walton fort ruin and the scour channel.  It is undoubtedly something that was built before the 1700s when the area was inundated.  If it did not appear on maps or drawings of that time it was probably already buried under sand, it might be a road or walls from the Roman or Norman period.   Where it extends closest to shore is approximately where the scuba club found a pile of red bricks.  What I have labelled as “scour channel” might be the Roman era streambed.  It would not be unreasonable to assume that there were out-buildings or a village near the fort walls.

Fascinating!  I wish that I knew more about the Lidar world; undoubtedly the datasets created for flood planning contained very detailed aerial images, if one could but extract them.

2 thoughts on “Lidar on the Roman fort at Felixstowe”