On various sites you can find the claim that the Latin word “gladiatrix”, meaning a female gladiator, is a modern word, unknown in antiquity.  For instance this article:

The term gladiatrix was never used in ancient times; it is a modern word first applied to female gladiators in the 1800’s CE.

This in turn seems to be based on a line in this very useful page: by James Grout at Encylopaedia Romana:

There is no specific Latin word for a female gladiator nor was there a feminine form, gladiatrix being a modern construction, first used in a translation of Juvenal in 1802. The closest term to identify the female gladiator is ludia (from ludus, “stage performer”) but even that word tends to refer to the wife or lover of a gladiator.

But is this true?  It seems that it is not, and that there is a late antique usage for the word.  What it is not is classical.

I learn from Anna McCullough, “Female Gladiators in the Roman Empire”, in: Budin & Turfa (eds), Women in Antiquity: Real Women across the Ancient World, Routledge (2016), p.958 (preview) that:

Despite its usage by modern scholars and in popular culture, the word gladiatrix is unknown in classical Latin. To my knowledge, it only appears once in late Latin, in a gloss from a fourth-century AD commentary on Juvenal (Scholia in Iuvenalem Vetustiora).

In Satire 6, Juvenal mocks a woman who trains as a gladiator in a ludus, asking if she prepares merely for the Floralia, or si quid in illo/pectore plus agitat veraeque paratur harenae? (“if she plans something more in that mind, and is preparing for the real arena?” 6.250–251).

The commentary provides a gloss on line 251, offering the following explanation: nam vere vult esse gladiatrix quae meretrix (“for truly she wants to be a gladiatrix who is a prostitute”).

This is a nice bit of research, doubtless courtesy of one of those databases inaccessible to the general public.  But it is no less valuable for that.

The standard edition of the Scholia appears to be Paul Wessner, Scholia in Iuvenalem Vetustiora, in the Teubner series in 1931.  This is not accessible online, even though Wessner died in 1933 and it must now be public domain, even in the benighted lands of the “European Union”.  Does anybody have a PDF, I wonder?

But Wessner’s volume seems to be unique.  I suspect the scholia were previously printed as an appendix to Juvenal: and indeed an old post of my own from 2011 confirms this – an 1839 edition has them on page 153.  Our passage is on p.214: 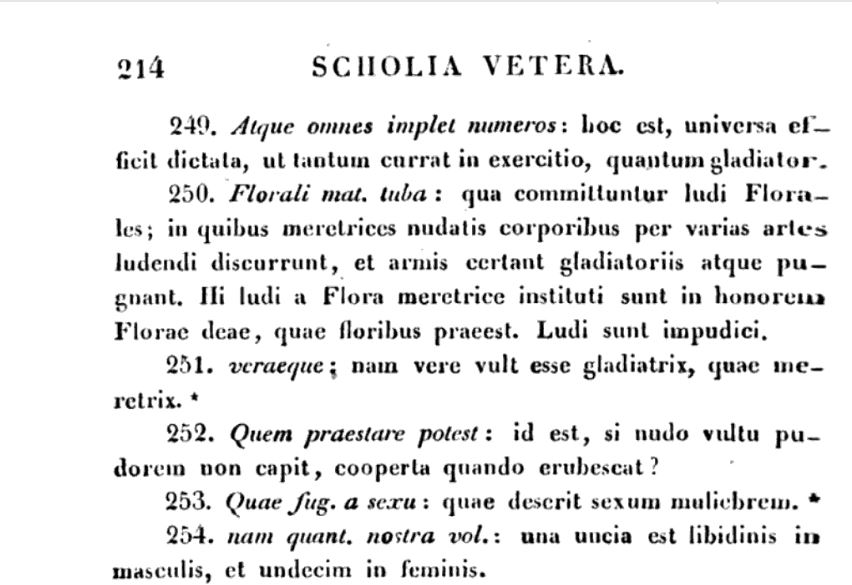 The editor tells us that he has placed an asterisk after some entries, which appear differently in more recent manuscripts.  I found his account of the manuscripts to be both vague and unhelpful, but learned that there are scholia in a St Gall manuscript.  This turns out to be Codex Sangallensis 871, 11th century, which is online at the amazing e-codices site here.  However the scholia were only copied for the first few pages.  Here is the starting page: 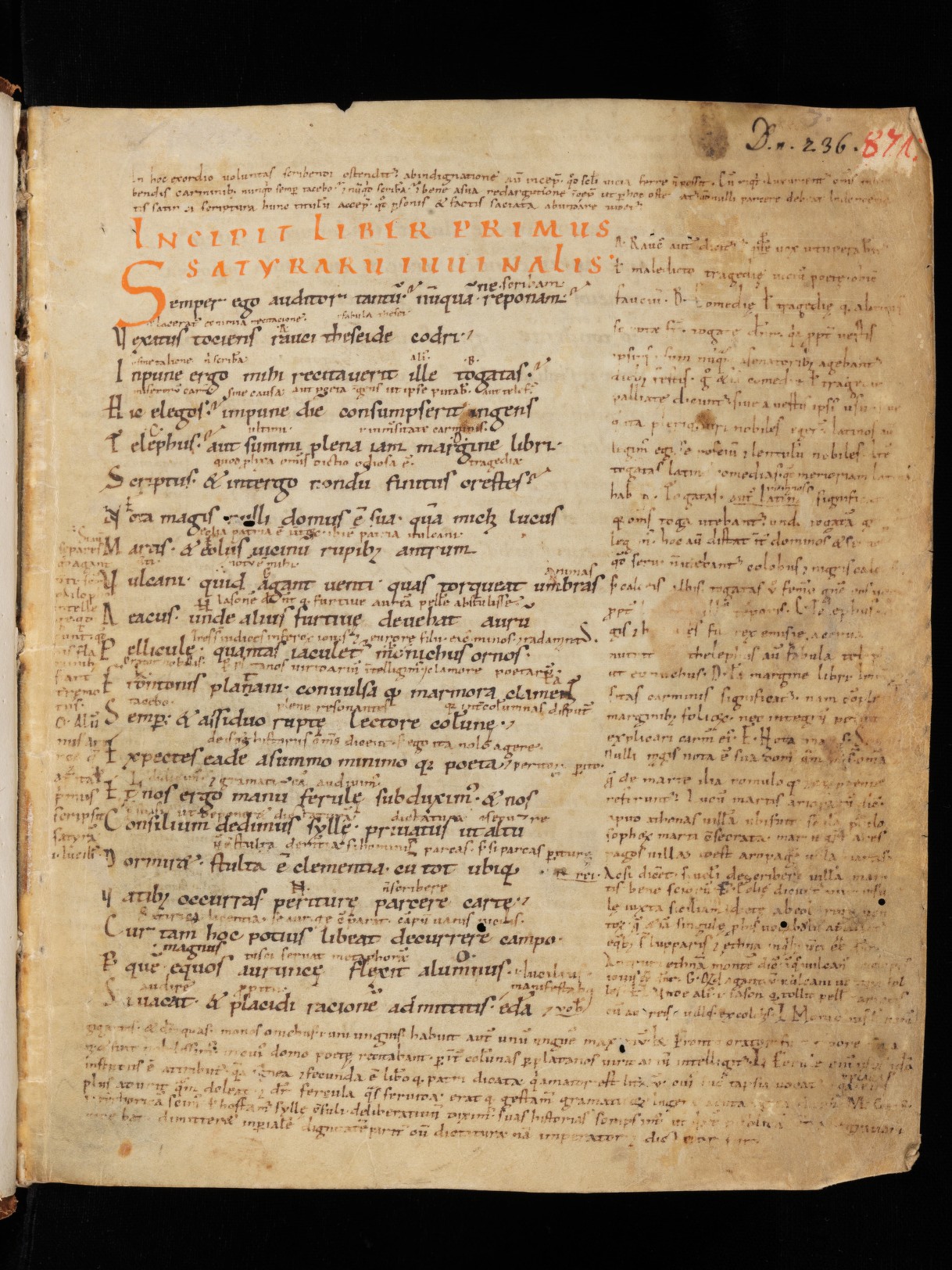 Later pages have space left for the scholia, which is not there.  The beginning of satire 6 is on p.46: 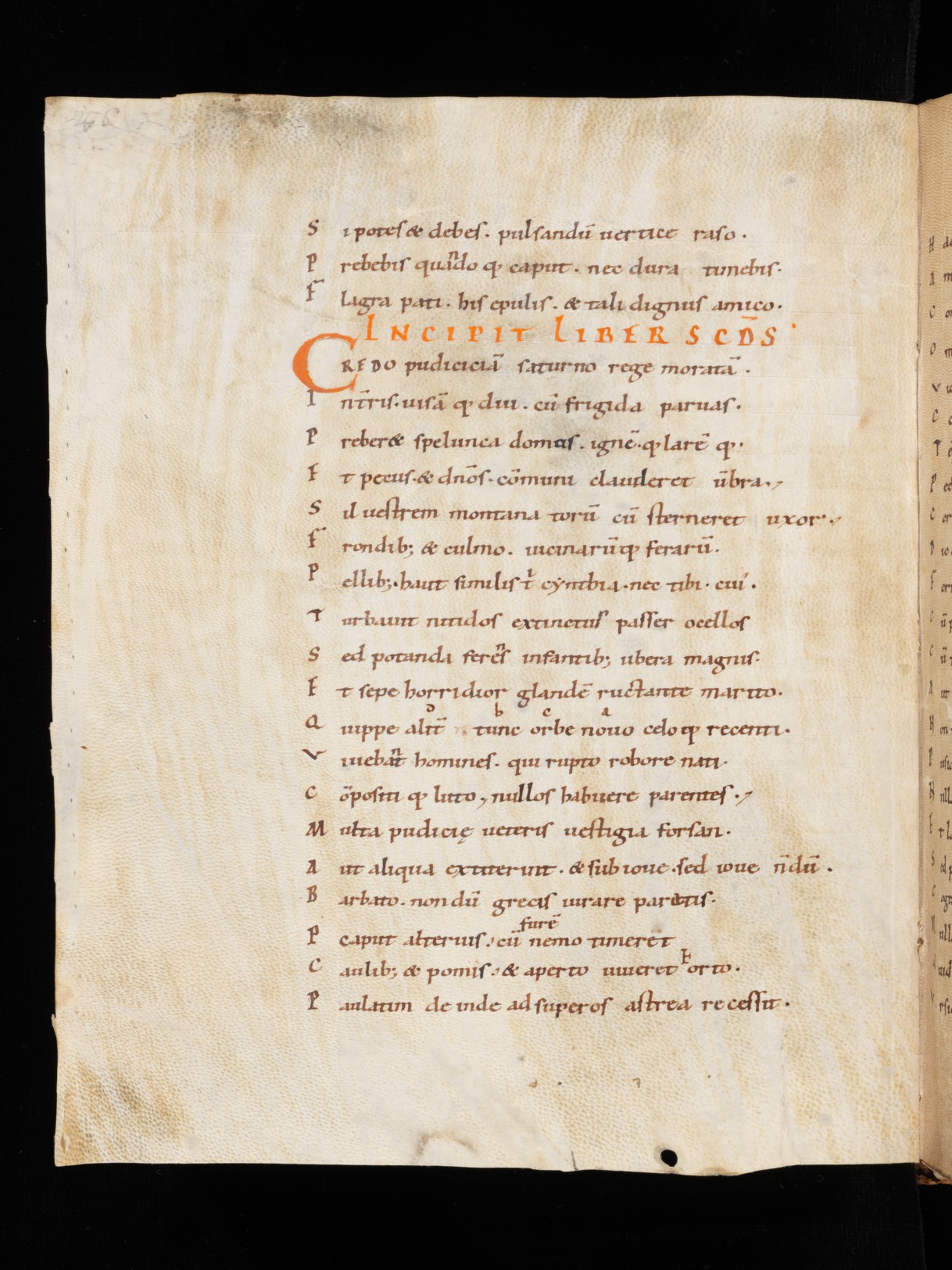 I don’t think that I have looked at the scholia themselves – last time it was the biography that interested me.  It is interesting to see them.

7 thoughts on “Is “gladiatrix” a modern term?”