Few of us know anything about Turkish literature or manuscripts, and I am certainly not among that number.  But I was interested to discover that some illuminated Ottoman manuscripts contain pictures of Byzantine monuments.  (Presumably they also contain text as well).  Here are a couple that I have found online recently.

Here is the first.  The source is given as “Terceme-i Cifrü’l-câmi”, or maybe Tercume-i Miftah-i Cifr ul-Cami, which apparently translates to “The Translation of the Key to Esoteric Knowledge”.  This is an illustrated manuscript in Turkish, apparently dating to ca. 1600. 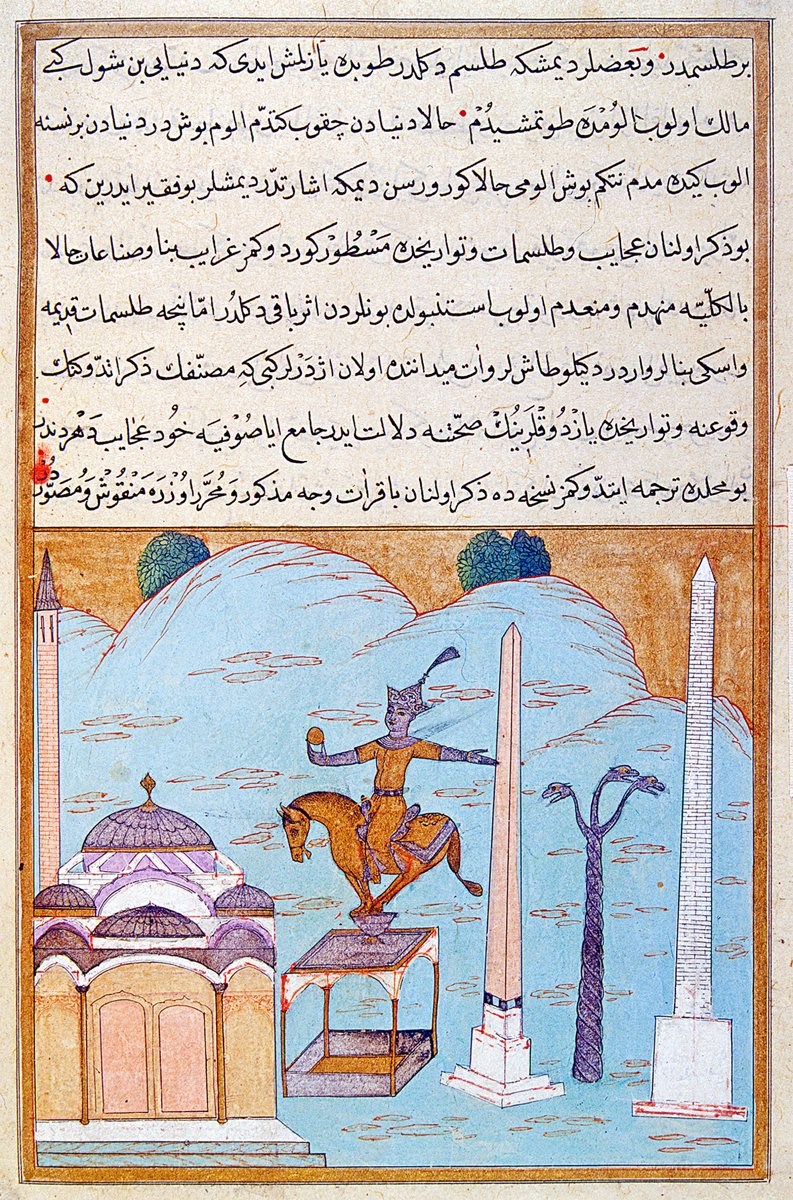 Note the heads on the serpent column, now alas vanished.  The church is Hagia Sophia, so this is the Hippodrome.

The next one (h/t @ByzantineLegacy) is from the “Hunername”, ca. 1530, which is another Ottoman illustrated manuscript.  It shows acrobats in the Hippodrome. 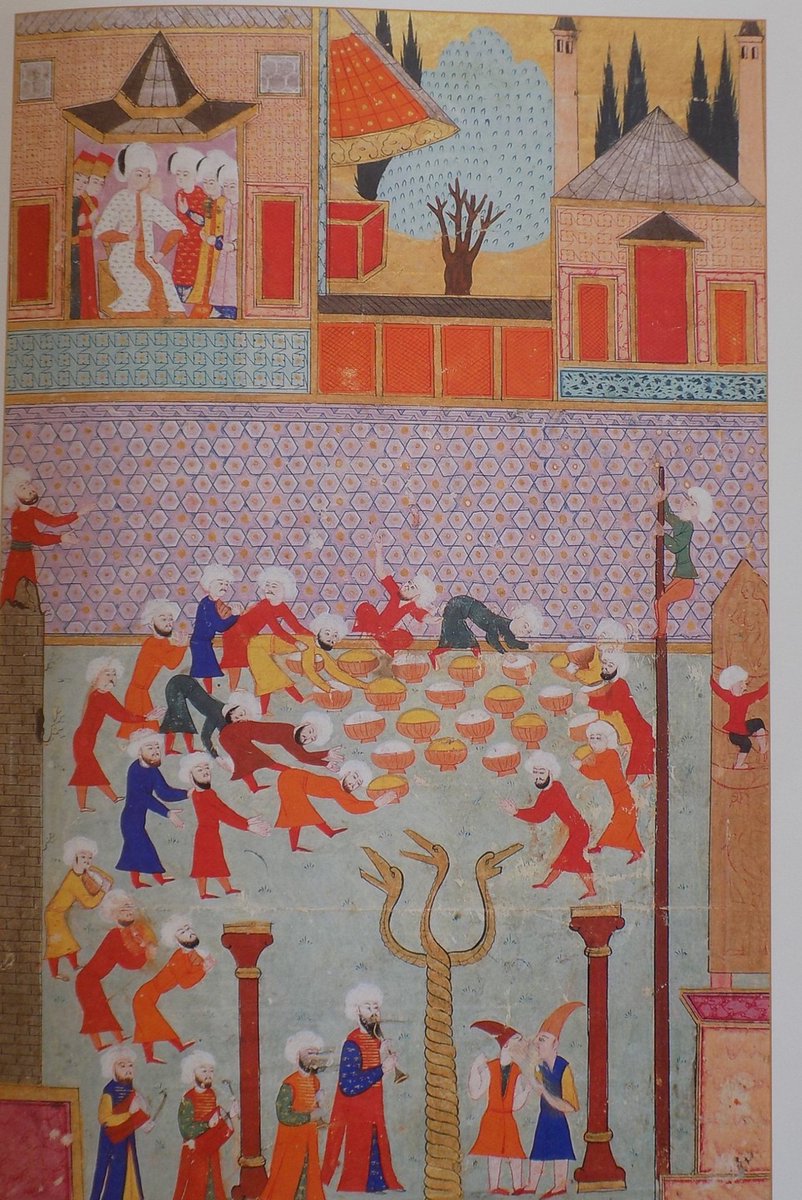 The Hunername is one of the more famous Ottoman illustrated manuscripts, written in 1584-88.  There is an article on it in French Wikipedia here.  It is held in the Topkapi Palace library, where its shelfmark is H.1523-1524 (i.e. in two volumes).

A further illustration, supposedly also in the Hunername, from here, via Wikimedia Commons, shows Mehmet II and the serpent column: 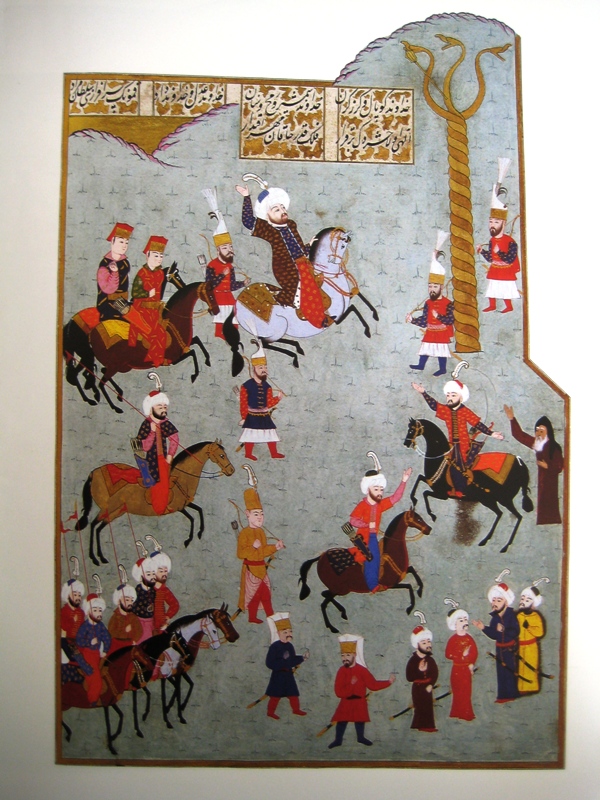 The Wikipedia commons page has the description,

“The text of the Hünername, written in the 1580s, claims that Patriarch Gennadios visited Mehmed II to tell him that if he damaged the Serpent Column the city would be infested with snakes, and a miniature was painted showing the patriarch giving this warning as the sultan throws his mace at a jaw.” Miniature from the Hünername”

The Turkish page does not say that this is from the Hunername, and only says that the heads of the serpent column were broken off by being used as targets during drills for horsemen, and adduces this picture as evidence of the Sultan doing just that.

The Wikipedia text seems in fact to derive from a 2013 page by Paul Stephenson, “The Serpent Column” which gives these fuller details:

The magical properties of the column were widely known and may have saved the column on two occasions: in 1204, Constantinople was sacked by the forces of the Fourth Crusade and much bronze statuary was destroyed or transplanted. Niketas Choniates composed a threnody for the city’s lost works of art, which did not include the Serpent Column. A reason for its survival is suggested on a later occasion, when Mehmed II “The Conqueror” captured Constantinople. The text of the Hünername, written in the 1580s, claims that Patriarch Gennadios visited Mehmed to tell him that if he damaged the column the city would be infested with snakes, and a miniature was painted showing the patriarch giving this warning as the sultan throws his mace at a jaw. Following Mehmed’s attack on a serpent head, there was a plague of snails. Mehmed, duly chastened, is said to have cauterised the roots of a mulberry tree that was growing within the column and threatening its integrity. the column, therefore, survived to be painted many more times by Ottoman miniaturists, notably the team of artists which produced the Surname-i Hümayun(fig. 4), also a product of the 1580s.

The Serpent Column was regarded as a talisman against snakes long before the 1580s. A version of the legend is reported by Kemal Pashazade, writing before 1512:[“Constantine son of Helena] caused to be made that bronze statue in the hippodrome which is the representation of three serpents twined together, and by making and designing that talisman he stopped up the source of the mischief of snakes whose poison is fatal to life.” Indeed, the column’s apotropaic powers were known to Russian travellers to Constantinople between c. 1390 and c. 1430, three of whom reported that “serpent venom is enclosed in the column.” This is also reported in 1403-6, by the Spanish ambassador Clavijo.

At a time when the Ottoman court had abandoned Constantinople (Kostantiniyye/Istanbul) for Edirne, the Serpent Column lost its heads. Various tales emerged, including one blaming an errant Pole, a member of a Polish ambassadorial delegation. Yet the most likely story is that related in a contemporary Ottoman chronicle: the metal which had supported the overhanging serpent heads for more than two millennia fractured on the evening of 20 October 1700. A head discovered a century and half later, during excavation and restoration work at Hagia Sophia, suggests that the heads were spirited away that night, but perhaps not so very far away. A close examination of the remaining head, in fact only an upper jaw, shows signs of hacking with a sharp object (fig. 5), suggesting that those who heard the heads fall with an almighty crash quickly set about it with axes, sharing the spoils as once crusaders had distributed other ancient works in bronze.

Stephenson in fact has since published a monograph on the subject.[1]

These images are interesting, but make me aware of the existence of a whole field of knowledge about which most of us know nothing.

7 thoughts on “Ottoman drawings of the monuments of Constantinople”