In 1541 Leonardo Bufalini drew a map of the whole city of Rome, the Pianta di Roma, with emphasis on the surviving ancient monuments.  This was printed in 1551.  Bufalini was early enough that his map shows much that has since been lost.

Among them is a map of the Baths of Constantine, standing on the ridge of the Quirinal hill, between two valleys on either side, with the Via Quirinalis leading off to the north-east, just as it does today, and the piazza where the Quirinal palace was to be built clearly visible next door.

A 1911 reproduction, with study, can be found at Heidelberg here.  The map is printed on individual pages, which makes it hard to use.  An enterprising gentleman has created a website here with all the pages put together, although for some reason he wants to stop people copying bits of it.

I’ve taken a small bit, and rotated it so that it aligns what must be north-south, using the roads that run off, in parallel, to the north-east, just as the modern map does today.  My apologies for the crudity – I am not great at image manipulation.  But here it is. 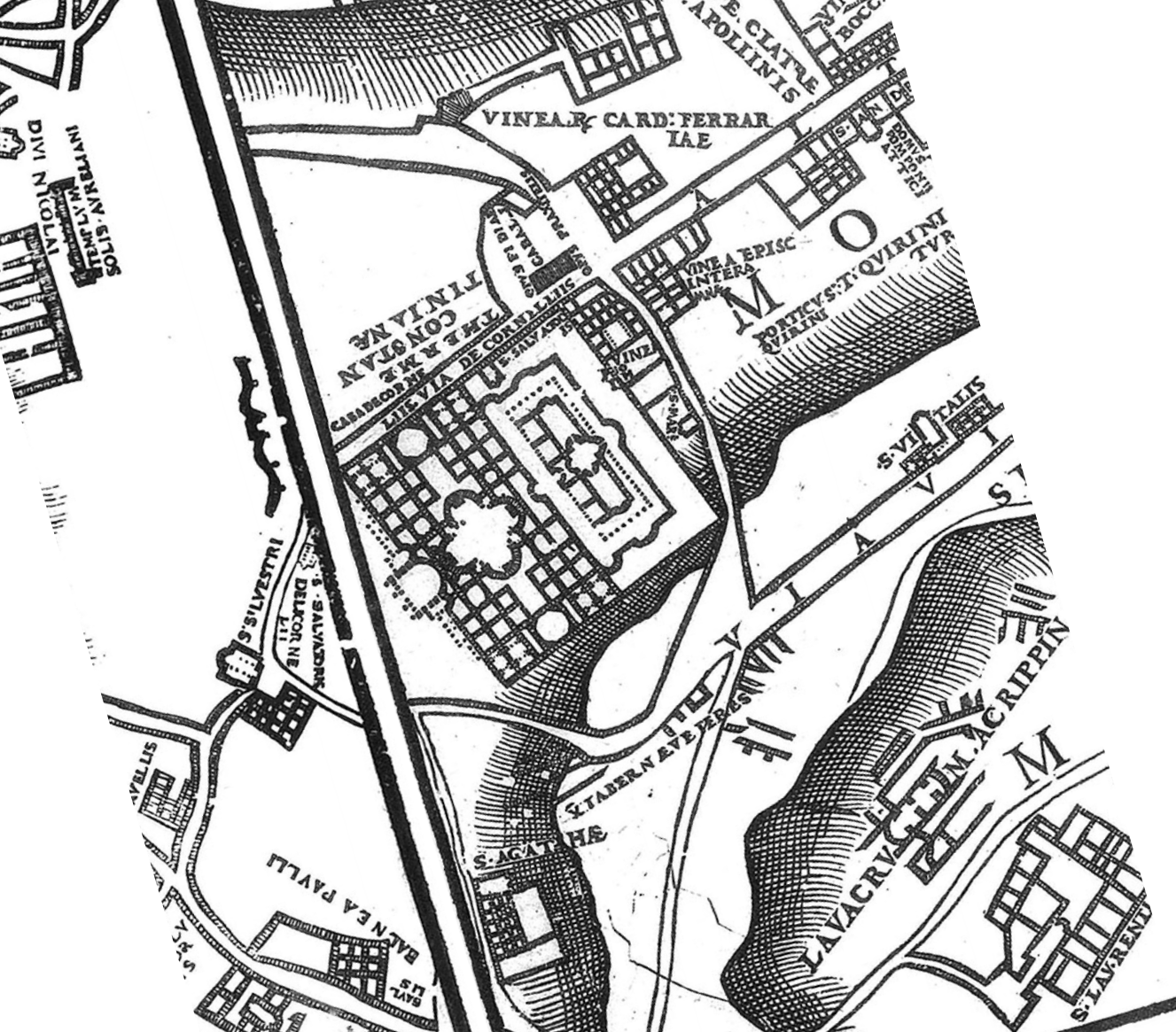 I would imagine that a good part of the gridwork shown on the plan of the “Thermae Constantiniae” is in fact foundations for gardens, because the slope underneath had to be built up.  The two circular structures on either side of the “gardens” were free-standing at this time, and appear as rotundas in other illustrations.

And here is the modern layout, via Google Maps, with what I imagine must be the location of the baths: 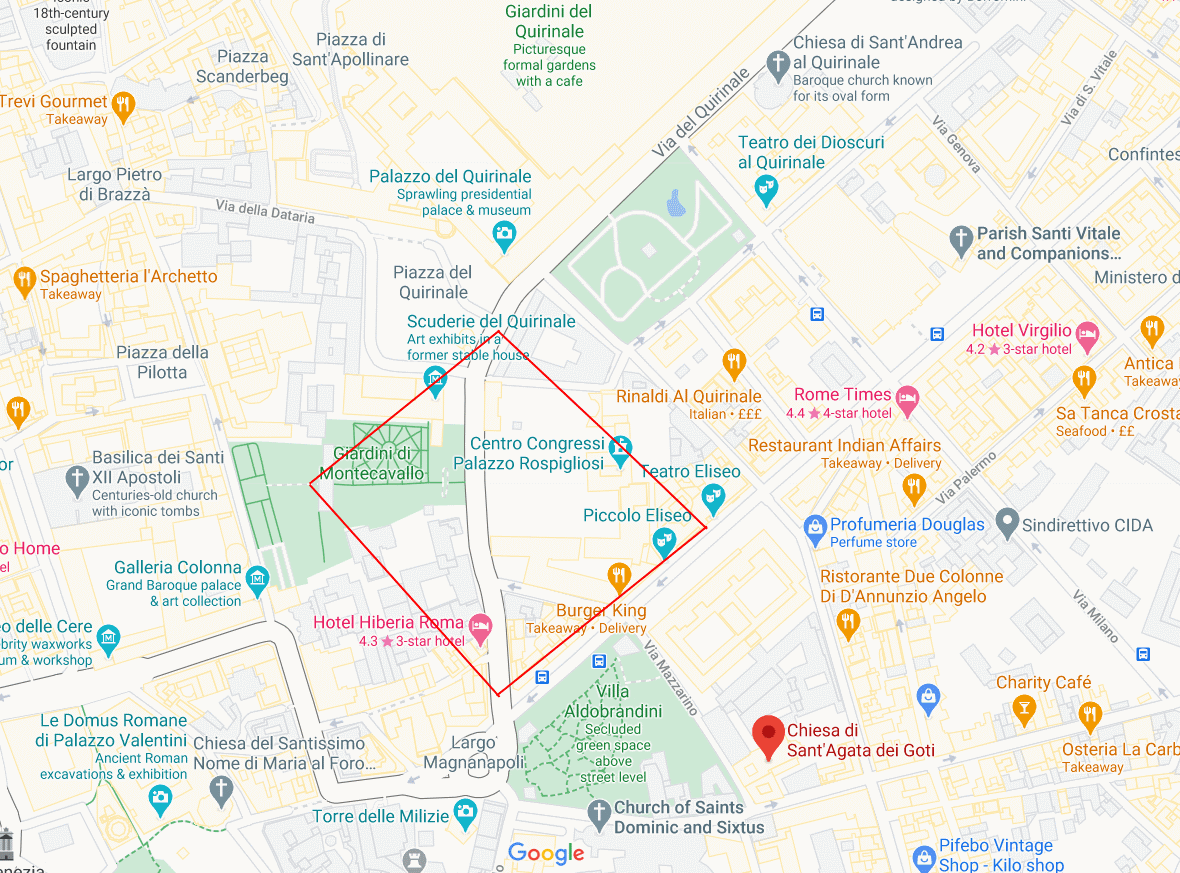 The key connection point is the (somewhat smaller) Quirinal plaza and the via Quirinale going off to the top right.

The modern Via della Dataria that leads down to the Trevi fountain is clearly shown on Bufalini’s map, to the left of the lettering “Vinear. Card. Ferrrariae”.  The Via Quirinale is shown.  A parallel “via Viminalis” is probably the Via Nazionale – a modern sounding name! – not labelled in the above screen-grab.

Surely there must be a monograph on the Baths of Constantine?

Update: I have since located the church of S. Silvestro al Quirinale, which the Bufalini map shows as facing the entrance to the baths, and to the left somewhat.  Here it is: so we need to slightly redraw the rectangle.  Looking again at the Bufalini map, I see that the “Via del Corneliis” drifts left, relative to the Via del Quirinale, just as the modern road does at the piazza, and the Baths are lined up with that, not the Via del Quirinale.  So let’s shift the plan a bit, and allow for the church. 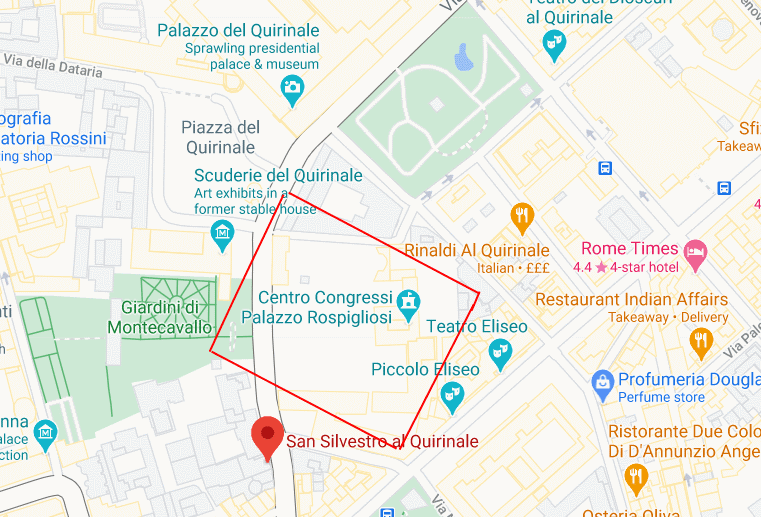 Note how the road going east from the church of San Silvestro al Quirinale – today called the Via Mazzarino – also appears on the Bufalini map.

Update (16/12/20): I have come across an article discussing the Bufalini map.  It seems that he was prone to embellishment.  His version of the Baths of Caracalla, which are extant, is apparently intentionally inaccurate.  For details see Jessica Maier, “Leonardo Bufalini and the first printed map of Rome”, Memoirs of the American Academy in Rome 56/57 (2011/2012), pp. 243-270 (JSTOR).

9 thoughts on “Bufalini’s plan of the Baths of Constantine”