The next item in our little series on the now-vanished Baths of Constantine in Rome is by none other than Palladio.  Andrea Palladio was a 16th century Italian architecture who became very famous for his 4-volume handbook on how to do Roman architecture.  This contained illustrations of many standing monuments, giving a plan, elevation and notes.  He also left unpublished drawings of the Roman baths, and one of these is of the Baths of Constantine, perhaps made around 1570.

The publication history of this is complex, and I will defer it to a separate blog post.  So these I give from an 1810 reprint of a 1785 volume: Andrea Palladio & Ottavio Bertotti Scamozzi [Editor], Le terme dei Romani: disegnate da Andrea Palladio e ripubblicate con l’aggiunta di alcune osservazioni da Ottavio Bertotti Scamozzi giusta l’esemplare del Lord Conte di Burlingthon impresso in Londra l’anno 1732, Vicenza, 1810.  This is available online at the Digital Library at Heidelberg here.  The plates (“tavola”) are at the end.  The text in the book is NOT by Palladio, but by the unfortunate Bertotti (who added himself the surname of Scammozi, taken from one of the Palladio’s pupils).

Plate 15 is the elevation, a reconstruction (from here): 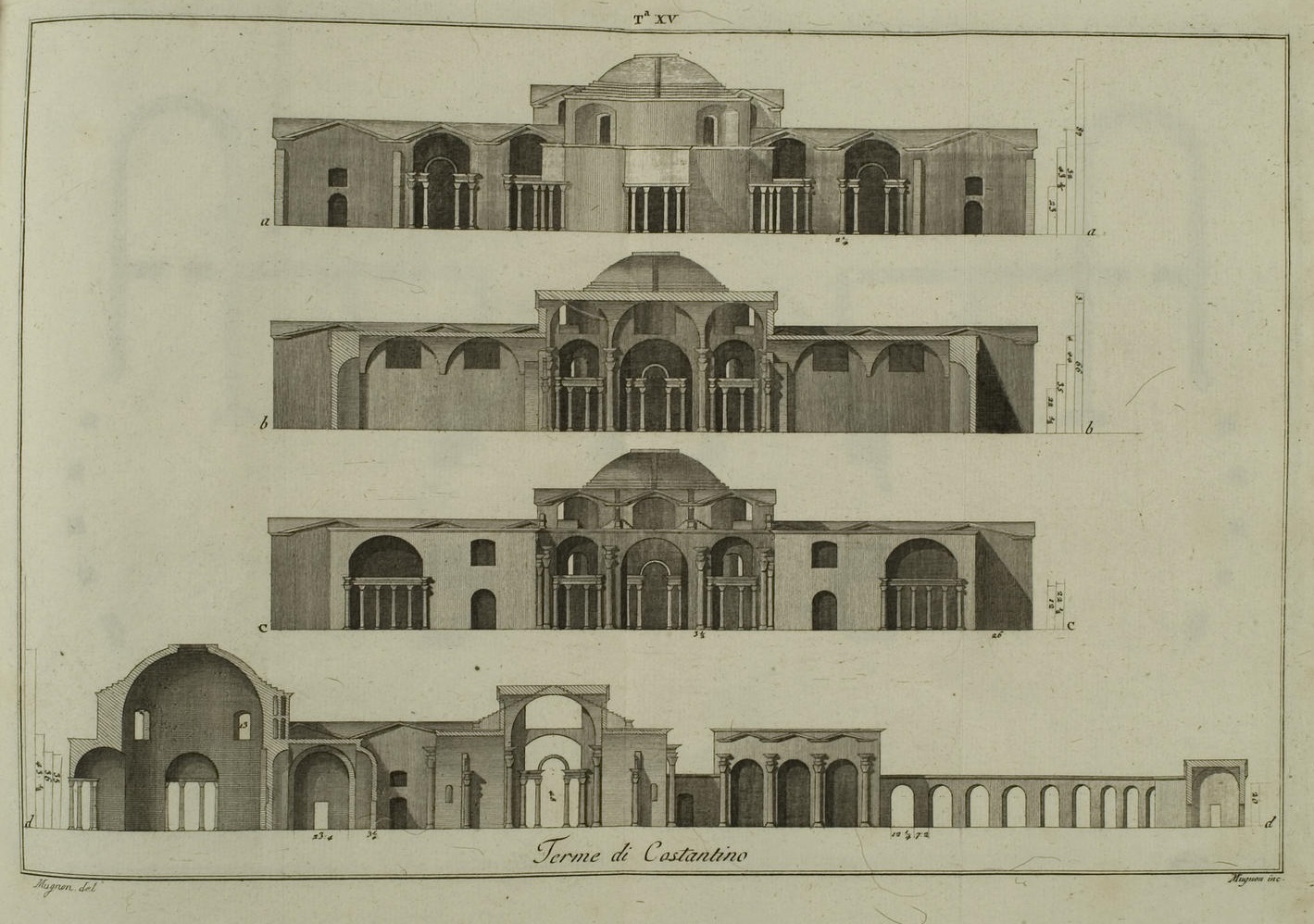 The notes and the measurements are original.  The unit of measurement is probably something called the Vicentian foot, which is about two metres, I believe.  Note that the section at the bottom of the elevation is the other way round to the plan – the big hall is at the right in the plan, the pool and arches to the left.

Scammozi did add a key, much of it his own guesswork or referring to an earlier volume by the Scottish adventurer, Charles Cameron, who published in London in 1772 his The baths of the Romans explained and illustrated. With the restorations of Palladio corrected and improved.  This can be downloaded from Archive.org here.  On p.64 (p.79 of the PDF) may be found Cameron’s comments on the Baths of Constantine, followed by his key to the plan.  The plan is on p.245-6 of the PDF, the elevation (printed backwards) is p.249-50 of the PDF.  Here is his key:

A. The Theatre.
B. A large circular building, which contained the baths for the wrestlers.
C. The Apodyterium.
D. Exedrae for the Philosophers.
EEE. The Tepidarium, Caldarium, and Laconicum : invariably placed in all the Thermae to the south west, according to the direction of Vitruvius.
F. The Frigidarium. It appears from Fabricius, that the buildings in this quarter were very lofty, as well as the furnaces, to which there was an ascent of one hundred steps.  “Aedificia quaedam Quadrata, auaedam rotunda altissimis fornicibus extant, quoroum unum per centum fere gradus ascendimus”.
G. The Xystus, with the margins I I round it.
HH. Atrium, and piscina [swimming pool].
KK. Porticos, for those to deposit their clothes who bathed in the piscina.
LL. Vacant area for admitting light to the different apartments.
MM. Conisterium and Elethoseum.
NN. Rooms where the spectators could see those who exercised in the Xystus without being incommoded. These rooms likewise served for libraries.
OO. &c. Rooms for the use of the wrestlers.
PP. Rooms for those who had the care of the baths.
QQ. Cold Baths for those who did not choose to exercise in the Xystus.
RR. Rooms for the candidates to withdraw in, who exercised in the open air.

Bertoti repeats the key of Cameron, but prefixes it with some comments on the plan of the baths which, unlike Cameron, he has examined.  He comments that he can’t understand the use of the arches around a semi-circular area at one end, with the label HH in it.[1]  He frankly confesses that he could make no sense of the measurements on the elevation.[2]

This is all very detailed, and naturally has been used by subsequent model makers.  The elevations must be largely reconstruction, even though they have measurements on them.

But how reliable is all of this?  How much is the imagination of Palladio, or borrowed from other baths?  I do not know.

I notice that the floor plan differs quite a bit from that of Bufalini, posted here.  Bufalini shows no semi-circular piscina, nor any blank space in which it could be.

In my next post, I will discuss exactly what we are looking at here.  These drawings have a history of their own!