Sub technology for magic and little has changed in almost 2,000 years

But … Justin’s works are mainly apologetic.  So where did he say this?

The source for this, and other tweets based upon it, seems to be this tweet from 2017 by Andy Crouch: 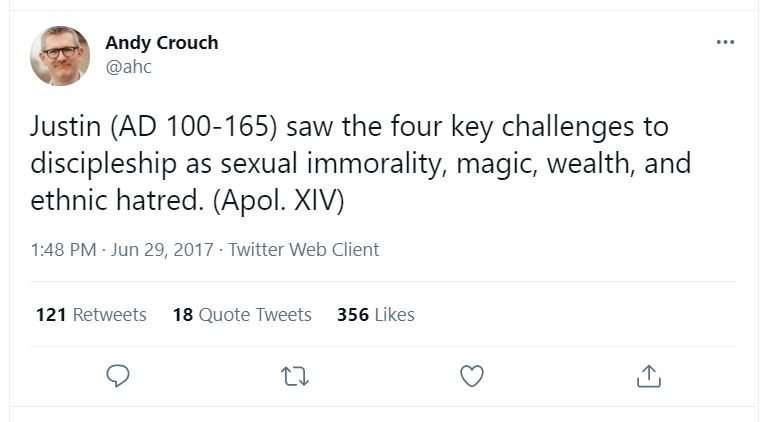 I have also seen this, with added quotes, as if it was a direct quotation from the works of Justin.  Here is an example: 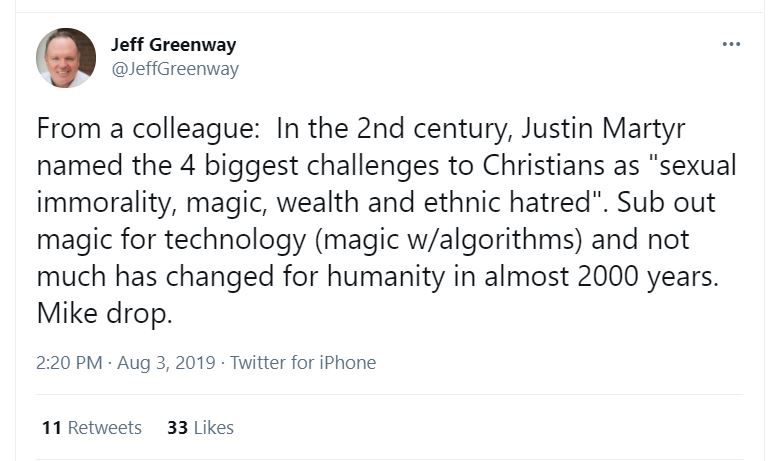 From a colleague: In the 2nd century, Justin Martyr named the 4 biggest challenges to Christians as “sexual immorality, magic, wealth and ethnic hatred”. Sub out magic for technology (magic w/algorithms) and not much has changed for humanity in almost 2000 years. Mike drop.

This is one way in which we get fake quotations, without anybody intending fraud.  Someone summarises in a striking way, and then others quote the summariser, and others assume the quotes refer to the author.

Thankfully Mr Crouch includes a reference, to the 1st Apology of Justin, chapter 14.  Here it is, in the old ANF translation – probably what was used:

[The demons] subdue all who make no strong opposing effort for their own salvation. And thus do we also, since our persuasion by the Word, stand aloof from them (i.e., the demons), and follow the only unbegotten God through His Son – we who formerly delighted in fornication, but now embrace chastity alone; we who formerly used magical arts, dedicate ourselves to the good and unbegotten God; we who valued above all things the acquisition of wealth and possessions, now bring what we have into a common stock, and communicate to every one in need; we who hated and destroyed one another, and on account of their different manners would not live with men of a different tribe, now, since the coming of Christ, live familiarly with them, and pray for our enemies, and endeavour to persuade those who hate us unjustly to live comformably to the good precepts of Christ, to the end that they may become partakers with us of the same joyful hope of a reward from God the ruler of all.

One sentence without taking a breath!  Thanks, Justin.  In the Fathers of the Church 6 translation by T. B. Falls (p.46-7) it is as follows:

They ensnare, now by apparitions in dreams, now by tricks of magic, all those who do not labor with all their strength for their own salvation–even as we, also, after our conversion by the Word have separated ourselves from those demons and have attached ourselves to the only unbegotten  God, through His Son. We who once reveled in impurities now cling to purity; we who devoted ourselves to the arts of magic now consecrate ourselves to the good and unbegotten God; we who loved above all else the ways of acquiring riches and possessions now hand over to a community fund what we possess, and share it with every needy person; we who hated and killed one another and would not share our hearth with those of another tribe because of their [different] customs, now, after the coming of Christ, live together with them, and pray for our enemies, and try to convince those who hate us unjustly, so that they who live according to the good commands of Christ may have a firm hope of receiving the same reward as ourselves from God who governs all.

Which is much the same.

But is Justin Martyr talking about “the four key challenges to discipleship”?  Not really.  He’s talking about the effect that Christ has had on the lives of those who accept him.

All the same, I think Justin would probably have approved of the interpretation.

3 thoughts on ““Four major challenges to discipleship”, by Justin Martyr (sort of)”