The first act of the Council of Carthage in 397 was to draw up a summary (breviarium) of the decisions of the Council of Hippo in 393, as many clergy claimed that they had never heard of them.  Let’s have a look at them.

SUMMARY OF THE STATUTES

1. That the readers shall not salute the people.  That clergy shall not be ordained, nor virgins consecrated, before the age of 25.

2. That for bishops and clerics who have been ordained, the decisions of the council first be thoroughly inculcated by those ordaining them, lest they declare (later) that they have done something contrary to the council’s statutes.

3. That also during the most solemn paschal days the sacrament shall not be given to catechumens, except for the custom of salt; because if the faithful do not change the sacraments during those days, it is not right that for catechumens to change (them).

Let me highlight a few funnies in this.

In canon 2, Munier (CCSL 149, p.32) prints “conculcentur”, which means that the decisions of the council “are trampled under foot” by those conducting the ordinations.  A solid search reveals only “despise” as the other meaning.

It seemed good that before bishops, or clerics were ordained, the provisions of the canons should be brought to their notice, lest, they might afterwards repent of having through ignorance acted contrary to law.

But how on earth does “conculcentur” fit in?

Then I happened to look at the old Mansi edition.  It reads “inculcentur”, the decisions of the council “are impressed upon them” by those conducting the ordinations.  A look at Munier’s apparatus reveals no sign of “conculcentur”.  Naturally at first I inferred a typo.  But in fact, if we look at one of the manuscripts that Munier used, the Vatican manuscript, Barberini 679, fol. 46v, we find exactly that reading: 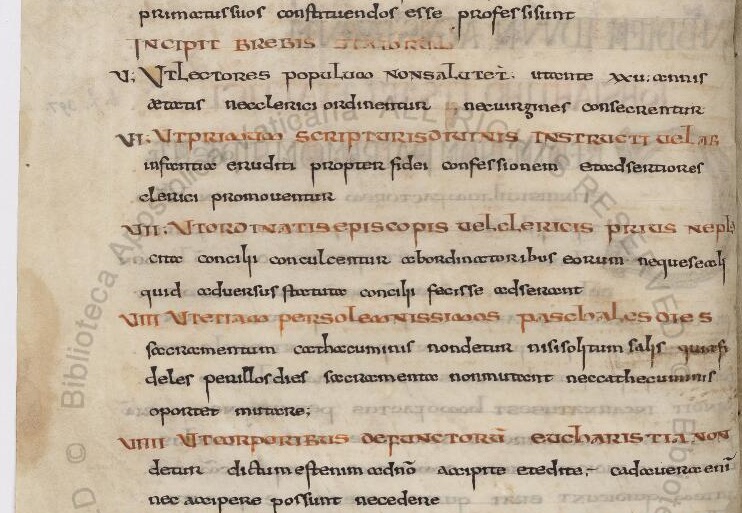 Is this a medievalism?  I do not know.  It once again impresses on me that it helps to look at older editions where the editors could read and wrire Latin fluently and would have been ashamed to print meaningless rubbish.  (Update: see discussion in the comments)

The text of the canon is not that easy to follow.  It starts with “ordinatis episcopis uel clericis prius” – an obvious ablative absolute, which in fact cannot be one.  Here the NPNF gives the clue.  It might be some dative of time, but not one that I have come across.  “Prior to the bishops or the clergy having been ordained”, perhaps. (Update: probably not – see discussion in comments).

What is the canon all about, anyway?  It looks as if it was about compulsory ordinations, when men were forced to be ordained.

These did occur.  I remember reading somewhere, in Augustine, how a rich and truly devout man, coming to Africa, was seized by the mob and forcibly made bishop of their church.  Their motive was not piety.  It was money.  For a bishop would be expected to give his property to the church, which inevitably would benefit the congregation.  However their victim escaped, and asked Augustine to be excused his ordination.  Shockingly Augustine, while recognising the injustice, thought that the ordination was still valid.  The case dragged on.  But then the man came to lose his riches in the disorders of the times, and then the “ordination” was quietly forgotten by everyone.

Update: it seems not!

It’s quite hard work, but of course this is how you learn a language; working with the real thing.

Update: some modifications based on the comments.