In the Rhineland, there are over a thousand inscriptions and reliefs dedicated to the “Matronae”.  All of these are Roman, and date to the second-third centuries AD.  There is some kind of close relationship with a particular German tribe, the Ubians.  The reliefs show three women; two older, either side of a younger woman.  In a 2016 thesis available online here, Kevin Worram states:[1]

Despite similarities to certain Celtic goddesses, like the Gallic Matres, the Matronae appear to be particular to this region based on their iconography.2 When depicted artistically, rather than just named on a votive, the Matronae come in a group of three with two older women flanking a younger maiden in the center (See Figure 1). They wear Ubian dresses and hairstyles, suggesting that the Ubians either brought the Matronae with them across the Rhine or adopted them after settling in the Celtic area west of the river.1 Often they have an epithet that ties them to a specific place or to the clan lineage of the devotee. Based on the votives, the Matronae cult seems to have been closely tied to this area and the Ubian population who lived there.

The figure referred to is the altar of Q. Vettius Severus (image via Wikimedia here):

This is dedicated to the “Matronae Aufaniae”.  The Matronae usually seem to have an epithet like this.  The meanings of these are unknown, but seem to be locations – the “Mothers of Aufania” or something like this.

This leads us straight into the most important fact about the cult of the Matronae.  The fact is that we know nothing about it.

It seems that this Roman cult – presumably a version of a pre-existing Germanic cult – is not referenced in any literary source.  No ancient writer ever mentions such a thing.  Consequently everything that is written on the subject is derived – or not derived – from the inscriptions and reliefs.  These say very little.  For instance, the inscription above reads:

To the Mothers of Aufania, Q. Vettius Severis, quaestor of the colony of Cologne, freely and deservedly fulfills his vow, Macrinus and Celsus being consuls.

VLSM is just a formula.  The date is 164 AD, the year when those two were consuls.  So … it tells us nothing.  Vettius Severus set up this item, dedicated to the Matronae, to fulfil a vow of some sort.

In 1958 there was a substantial find of inscriptions of this sort, during quarrying at a place named Morken-Harff in the Rheinland.  A dam was found, which had been built out of reused stones.  Over a thousand stones proved to come from 250-300 separate monuments, all fragmentary.[2]  The find was published by Hans-Georg Kolbe, “Die neuen Matroneninschriften von Morken-Harff”, Bonner Jahrbücher 160, (1960), 50-124, plates 10-25.  Unfortunately this is not online.

I was able to find online this image of one of the finds, an altar: 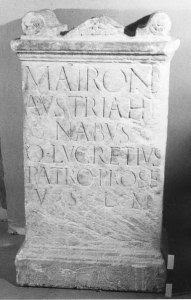 To the Matronae Austriahenae, Q. Lucretius Patro for himself freely and deservedly fulfills his vow.

Useful.  A search in the Clauss-Slaby database here for “austriahenibus” brings up 34 inscriptions, with pictures, mostly of fragments.

About this cult we know nothing.  It is perhaps unfortunate, but when we know nothing, it is very important to acknowledge this.  Failure to do so invariably results in the production of nonsense.

Since 1962, there has been a considerable literature on what this might mean.  Speculation has run rife, for evidence there is none.  In an evil hour the philologists were let loose, and some of these managed to infer from “austria-” a link – presumably based on what they think these words must have sounded like – to the Anglo-Saxon goddess Eostre mentioned by Bede in 725 AD in De ratione temporum.  Bede gives Eostre as the origin of the old English month named Eosturmonath.  The ancient Christian festival of Pasch falls in that month, and so arises the English word “Easter”, familiar to us today.

All this would be very much a fringe interest.  Sadly in the last two years there has been a massive upsurge in social media posts making the extraordinary claim “Easter is pagan! ha ha!”, usually at Christian holidays.  Much of this seems to come from the professional online army of Democrat party, presumably as part of the horrible politics of our day in order to spite their political foes.

These stormtroopers have no idea how this claim could be so, nor do they care.  The object is mockery, not information.  But others have come to their aid.  They claim that Eostre predates Easter.

Sane people point out that Eostre is only recorded once, in 725 AD, while Easter is recorded in the 2nd century AD.  The early Christians did not possess time-machines.  Sadly such obvious responses have little effect.

Lately I have seen the reply that Eostre is recorded as the Matronae Austriahenae.  It seems that one of these people has edited the dreadful Wikipedia article on Eostre to insert material which will infallibly be taken that way.  The reference given has been carefully and selectively quoted to suggest that the name “must be cognate to Eostre”, which is enough for the purpose.  But it leaves a sane man wondering how anybody could know this.

It is curious to learn that people are so certain of the sounds of these words, which they know only from a written form.  They know the origin of words whose sound has not been heard by any man, and  whose meaning is unknown to any man, living, or who have lived, for more than a thousand years.  How odd to be certain that history may be discovered based on nothing more than a supposed sound and a supposed similarity.  Sometimes you wonder whether the humanities is really, as the scientists think, just a game rather than a discipline.

The truth is that nothing whatever is known of the Matronae Austriahenae, except that some Romans dedicated a stone to them in fulfillment of vows between 150-250 AD.  There is no link with Anglo-Saxon goddess five centuries and hundreds of miles further away.  The rest is imaginary.