Once again only a single manuscript of the Chronography contains an image for this month.  This is MS Vienna 3146, which never contains the text of the poems, only the pictures. So for the poems, once again we are reliant on other, unillustrated, manuscripts, or the indirect tradition.

June unclad then views the sundial’s time,
And shows that the sun is changing its course. .

The Lamp-festival marks Ceres’ ripe ears of corn,
And the scattered lily-petals show the fading of the flower.

“Phoebus” here means the sun. The reference to “Lampas”, a festival with torches on the solstice is also attested in the ps.Chrysostom, De solstitiis et aequinoctibus (translated elsewhere on this site), the “dies lampadarum” or “day of torches”, or, more briefly, “lampas”, “the torch”.

June itself gives you the reason for its name,
Extolling having brought forth abundant fruitfulness.

Again the image is only preserved in the 16th century Vienna manuscript 3416, folio 25 (online here): 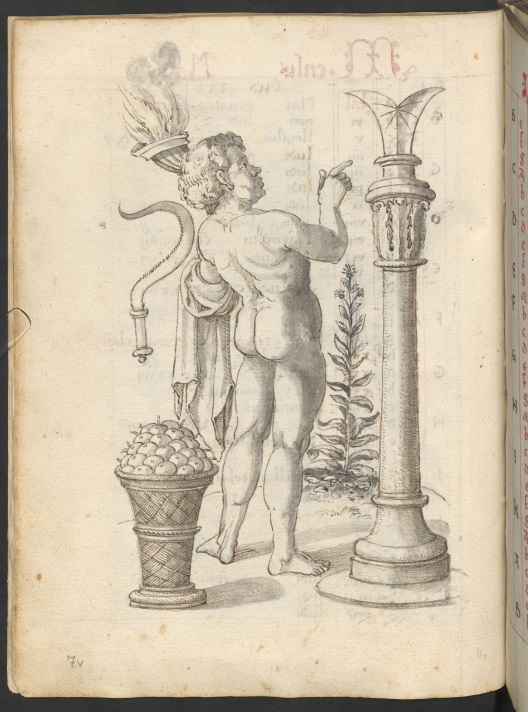 From Divjak and Wischmeyer, I learn that the depiction is of a naked youth carrying a torch, symbolising the solstice, a sundial on a pillar, and – indicating the harvest – a sickle, a basket of fruit, and a plant.

4 thoughts on “The June Poems in the Chronography of 354”