Here is the 4-line poem (tetrastich), with the draft translation that I made earlier in the year.  Comments are always welcome!

Look! July shows off his tanned limbs,
Whose reddish hair a garland of corn ties.

The glad mulberry, loaded down with fruit, offers blood-red berries,

It is green in the middle star of Cancer.

I.e. in the heat of summer.

How rightly, Quintilis, you changed your name!
A pious motive assigned you to the honour of Caesar.

I can’t work out the syntax for the second line: honori is dative, of course, not nominative.  The sense is that the motive for the change of name is to honour Caesar.

Again the image is only preserved in the 16th century Vienna manuscript 3416, folio 27 (online here): 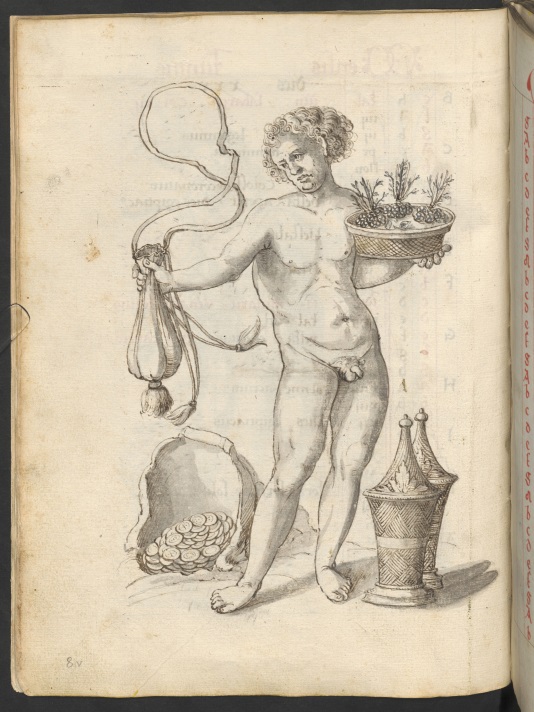 As usual with this manuscript, the image is in the style of the renaissance, not antiquity.  But probably the layout is much the same as the original.  From Divjak and Wischmeyer, I learn that the depiction shows a naked young man – an image of summer, holding a bag in his right hand with extra long tassels.  In his left hand he holds a flat round basket containing three bunches of fruit with leaves, perhaps mulberries.  By his right foot is some kind of vessel – a money bag? – filled with coins marked with crosses and other symbols.  Two conical vessels stand by his left foot.  The whole picture is of a good harvest with the resulting wealth.

UPDATE: Many thanks to those who sent in corrections!

11 thoughts on “The July Poems in the Chronography of 354”