An interesting email came to me today from David Wilmshurst, discussing the problems that a scholar has in editing Wikipedia, with a very nice turn of phrase in it:

No agreement will ever be possible in a democratic forum like Wikipedia, because Assyrians and Chaldeans cannot agree on the basic premises.  Instead, I have outflanked these miserable insects – as the Nestorian patriarch Elisha  (524-39) amiably termed his opponents – by writing my own book on the subject, in the hope that after it is published I can bludgeon them into submission by citing it as an authority.  I confess, though, that I am not optimistic of success.

The phrase “miserable insects”, for the dogs in the manger, is a delightful one.  My correspondent also kindly sent over a translation of the passage in which Elisha said this.  It comes from the Nestorian Chronicle of Seert, Part II, Chapter 25, apropos of the schism of Narsai and Elisha.  Elisha has suppressed Narsai’s supporters in most of Mesopotamia, and only Kashkar in Beth Aramaye still openly defies him.

Elisha, on his return to Seleucia, reached an agreement with the metropolitans and bishops who supported him to take his revenge on the inhabitants of Kashkar.  He then consecrated a bishop named Barshabba in place of Samuel.  This bishop, who was rejected by the people of Kashkar, returned to Elisha.

Thanks to the doctor Biron, who obtained for him a royal edict aimed at giving him support, and to the militia commanders, who were ready to act upon his orders, Elisha resolved to attack the people of Kashkar to take his revenge on them.  They, having got wind of his plan, prepared to defend themselves, to fight, and to repel whoever attacked them.  They were supported by many men from Beth Huzaye and Beth Garmai, who opposed Elisha.

The latter was extremely angry at this.  ‘How,’ he said in the presence of the people of Seleucia, ‘do those those miserable little insects, who claim to have rejected and humiliated me, think that they can get the better of me, since I have been victorious everywhere else?’  This speech reached the ears of the people of Kashkar, and inflamed their anger.

Elisha returned to his residence, holding the royal edict in his hand.  One of the people of Kashkar approached him in the middle of the crowd to kiss his hand.  When the catholicus held it out to him, the man of Kashkar seized the edict from him and gave it to someone else.  A strict search was made for this man, but he was never found.

The quarrel worsened.  One group of supporters would tear the clothing from their opponents, or the two sides would come to blows.  Elisha was mortified to have lost the royal edict, which had cost him so much to obtain, and to have been the object of the offensive mockery of the people of Kashkar.

I fear that the Chronicle of Seert is not a pro-Elisha source!  But the impatience of a great man with foolish opposition is apposite.

The text was published with French translation in the Patrologia Orientalis series by Addai Scher, who was done to death in 1915 as part of the massacres of Christians by the Turks.  I don’t know of an English translation, however.

I saw a headline in a local paper: “Teacher suspended after using ‘inappropriate force’ to restrain pupil”.

For some reason my mind drifted back to the halcyon days of Down with skool, and the varied methods of assuring justice favoured by the cane-wielding masters of the day.

What would Nigel Molesworth, the curse of St. Custards — or at least those who had to teach him — have thought?

Probably they would have said that things could go too far.

But I think that probably the only idea of “inappropriate force to restrain” in Nigel’s mind would be “hanging a boy by the neck until dead”. 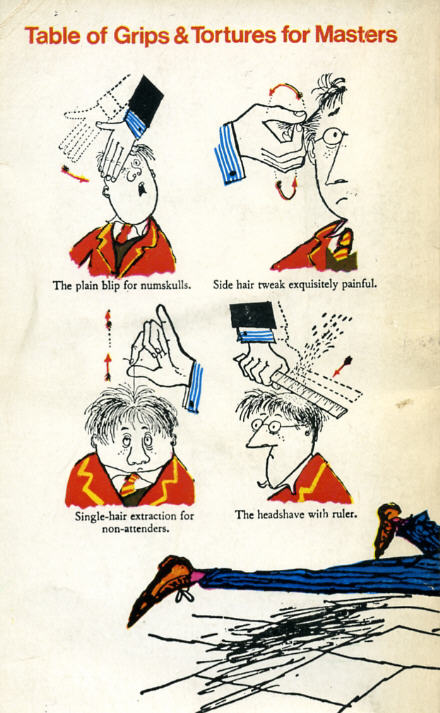 Looking out of the office window at 4 minutes to 4pm.  Thick fog is gathering outside.

It’s getting dark.  It’s Friday evening.  It’s foggy.  Soon the lorry drivers will pour out of goods’ yards onto the motorways and jack-knife their lorries across the main commuter routes, as is traditional under these conditions.

Such conditions must have been more romantic in Victorian times.

What?  Do you mean that the sinister doctor and the mysterious chinaman have removed the body to the lonely house on the moor?!

These days, they’d simply get stuck in traffic.  Fu Manchu never had to cope with speed cameras I’m sure. 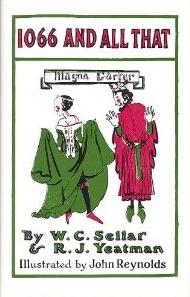 Devotees of 1066 and all that, the only reliable guide to English history, will enjoy this article by John Crace in the Guardian, parodying Radio 4’s History of the world in 100 objects.  It’s a joy!  A couple of extracts:

33 The Rosetta stone This seemingly ordinary stone tablet (196BC) was the key that unlocked Egyptian hieroglyphs. The text itself may appear a rather boring tax record, yet it reveals how Egyptian customs became the basis of international tax law. As George Osborne says: “It clearly shows that pharaohs are entitled to keep a £4m trust fund offshore while the rest of the country gets screwed.”

60 Kilwa pot shards It’s amazing what a few broken pots can tell us. These fragments (AD1400) found in Tanzania show us that people have always been clumsy and that if they took more care we would have a lot more artefacts. As Dr Jeremy Ceramics says, “I agree with everything Neil has just said.”

h/t Bread and Circuses, which I ought to read more often.

Lysander, after the final defeat of the Athenians, despatched a quantity of coin and treasure to Sparta by sea, under the care of Gylippus, who had been the Spartan commander at Syracuse.  He, not aware that each sealed box contained under the lid a written statement of the contents, loosened the bottom of each and took out a quantity of silver money bearing the device of an owl.  The stolen money he concealed under the roof of his house, but he took the boxes to the Ephors, and showed them the unbroken seals. Finding the accounts did not tally, they were much perplexed, till they received a useful hint from a servant of Gylippus:– “There is a whole lot of owls roosting under master’s tiles.” — Plutarch, Vit. Lysand. ch. 16.

An important article at Monday Evening for those who are generous, and perhaps tend to attract freeloaders:

Here’s how to deal with an annoying mooch who is otherwise a basically decent guy: Just say no. Don’t say why not; that invites negotiation. If asked why not, say no again, and ignore any uncomfortable silence. You do not want his request for a favor to turn into a dialogue.

The Onion has the story:

WASHINGTON—A group of leading historians held a press conference Monday at the National Geographic Society to announce they had “entirely fabricated” ancient Greece, a culture long thought to be the intellectual basis of Western civilization.

The group acknowledged that the idea of a sophisticated, flourishing society existing in Greece more than two millennia ago was a complete fiction created by a team of some two dozen historians, anthropologists, and classicists who worked nonstop between 1971 and 1974 to forge “Greek” documents and artifacts. …

According to Haddlebury, the idea of inventing a wholly fraudulent ancient culture came about when he and other scholars realized they had no idea what had actually happened in Europe during the 800-year period before the Christian era.

Frustrated by the gap in the record, and finding archaeologists to be “not much help at all,” they took the problem to colleagues who were then scrambling to find a way to explain where things such as astronomy, cartography, and democracy had come from.

Within hours the greatest and most influential civilization of all time was born.

“One night someone made a joke about just taking all these ideas, lumping them together, and saying the Greeks had done it all 2,000 years ago,” Haddlebury said. “One thing led to another, and before you know it, we’re coming up with everything from the golden ratio to the Iliad.”

“That was a bitch to write, by the way,” he continued, referring to the epic poem believed to have laid the foundation for the Western literary tradition. “But it seemed to catch on.” …

Much is explained.  I never believed that Alexander was real, did you?  I mean, a bunch of Greeks march right the way across the known world, defeat everyone they meet, and then just get bored and go home?

In other news (h/t PhDiva), apparently a rabbi in Israel has ruled that female Mossad agents who sleep with people to entrap them are not breaking the law of Moses.  At least, a journalist has said so, so of course I believe it.

An Israeli rabbi has given his blessing to female agents of Israel’s foreign secret service, Mossad, who may be required to have sex with the enemy in so-called “honey-pot” missions against terrorists. …

There is a catch, however, for married honey-pots. “If it is necessary to use a married woman, it would be best [for] her husband to divorce her. … After the [sex] act, he would be entitled to bring her back,” Schvat wrote. …

Schvat’s study was praised by Tzomet’s director, Rabbi Yisrael Rosen, who added that “women employees of the Mossad are probably not going to come consult with a rabbi” before their missions.

This is very bad news.  Barely a week goes by without some hussy with an Israeli accent turning up on my doorstep and demanding to have sex with me in order to discover everything I know about terrorism.  It’s one of the risks of blogging about Arabic.  Thus far I have always fobbed them off with questions about the Jewish law.

But it seems that  Mossad have got wind of my ploy.  No doubt “Reverend” Schvat was paid off big time for this betrayal of all of us celibate blogging hunks.  What man is now safe?

Trouble is, all these female agents are desperately ugly and diseased.  But one does not like to say so, particularly as they are always heavily armed, always willing to kill, and often rather touchy.

Furthermore they are all wired up for sound, which tends to cool everyone’s ardour.  Knowing that your colleagues will be listening to it all and laughing at your seduction routine and repeating selected portions in the canteen is somewhat off-putting.  Nor do I wish to be reported for sexism to the Equality commission by some aggrieved wench.

Truly life is a vale of tears.  Perhaps I should just get a dog.

As Count Yor used to say (an in-joke for readers of Yor’s Revenge).

Who knew that careless capitalization could cause so much trouble?

I have been reading the essays of E. M. Blaiklock, a Christian scholar and professor of Classics at Auckland university for many years, published as “The best of ‘Grammaticus'”.

He remarks on an occasion when a quotation from St. Paul suffered a ‘f’ where a ‘g’ should be: