A few weeks ago, I discussed a fake quotation attributed to Pope Innocent III:

Anyone who attempts to construe a personal view of God which conflicts with church dogma must be burned without pity.

These kinds of “quotes” are often derived from opinions by modern writers, which someone has then turned into a quote by the object of the opinion.  And so it proved; it was a quote from Peter Tompkins, The Magic of Obelisks.

But a correspondent then pointed out that the phrase appeared earlier, in the English translation of a book by Frenchman Maurice Magre, in 1931.  The US title was “Magicians, Seers and Mystics”; the UK title “Return of the Magi”, London, 1930.

This I have now obtained, and as it is public domain, I have uploaded it to Archive.org here.  And indeed this is correct – on p.60, our “quote” appears.

Three terrible figures dominate the great Albigensian massacre. For the massacre to be possible, it was necessary that an extraordinary genius for violence, for organisation, and for hypocrisy, should take shape in three men, who were all equally devoid of pity and, possibly, equally sincere in their hatred of heresy and love of the Church.

It was Pope Innocent III who, with obstinate determination, desired and decided on the crusade. The murder of the papal legate Pierre de Castelnau was only a pretext. Historians are unanimous in gloryifing this pope. To them the great men of history are men who do something, who have a powerful will and exert it to attain an aim. It makes no difference whether the aim is sublime or abominable; it is success in attaining the aim which gives the measure of genius.

As soon as he was elected pope, in all his public utterances Innocent III began to talk of ” exterminating the impious.” It was the dominating idea of his life, and he realised it wholeheartedly. He had a deep-rooted conviction that any man who attempted to build up a personal view of God which conflicted with the dogma of the Church must be burned without pity at the stake.

No reference or source is given for the claim.

The author appears to be an occultist.  A chapter is devoted to the supposed origins of Rosicrucianism, recited uncritically; another to a biography of Apollonius of Tyana, equally uncritically given.  The prose style of the author is that of a historian; the content is nonsense.

With luck, this is the final origin of this striking phrase. 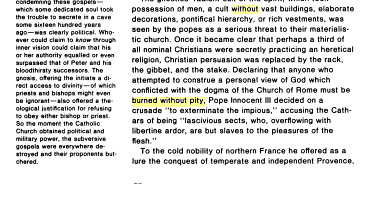