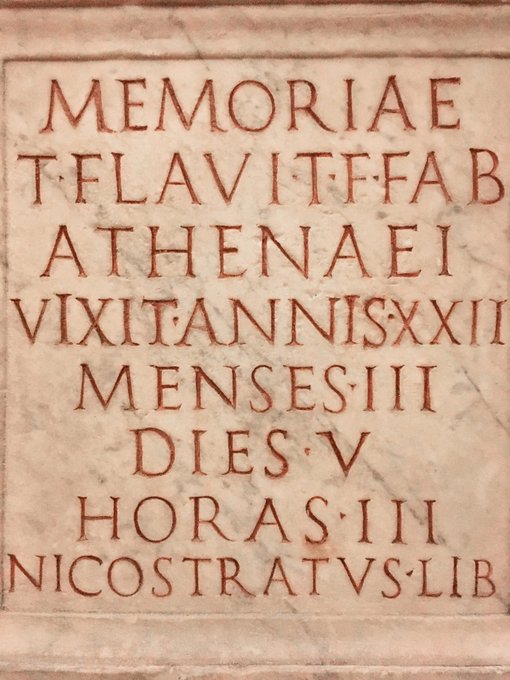 The monument is today ca. 1.09m high, 0.54m wide, and 0.23m thick.  It suffered minor damage during its journey from Tunis to the Louvre in 1886, but at some point lost the upper part of the inscription.

It begins with the remains of four separate but brief funerary notices, of at least two women and one man, and one unknown, not bearing the classic three names, but which each feature a formula pius/pia vixit annis which is normally Christian.  They are also in a quite different script, and must be later as they run over the top of the poem.  There is a detailed discussion of the monument in Brent D. Shaw, Bringing in the sheaves: Economy and Metaphor in the Roman world, p.281 f.  [1]

Thanks to Miranda Halsey, to whom I also owe many of the references, I learn that this was published as Corpus Inscriptionum Latinarum 8.11824 = Inscriptiones Latinae Selectae 7457 (from Tunisia, 3rd century A.D.).

I was born into a poor dwelling and of a poor father, who had no property or household. From the time of my birth, I lived in the country looking after my business; there was no time off in the countryside and none for me at any time. And when the time of year had brought forth the grain ready for harvest, then I was the first reaper of the stalks. When the sickle-bearing gangs of men had made their way to the fields, whether heading for the nomads of Cirta or the fields of Jupiter, as harvester I preceded them all, first into the fields, leaving the packed bands behind my back. I reaped twelve harvests under the raging sun, and afterwards became a work gang leader instead of a labourer. We led the gangs of harvesters for eleven years and our band cut down the Numidian fields. This effort and my frugal lifestyle brought success and made me master of a household and gained me a house, and my home itself lacks nothing. And my life gained the rewards of office: I was myself enrolled among the conscript councillors. Elected by the order [of the decurions], I had a seat in the order’s temple and, starting out as a humble country boy, I too became censor. I produced children and saw them grow into young men and saw their children too. In accord with our services in life, we have enjoyed years of fame, which no bitter tongue has hurt with any reproach. People, learn to pass your lives without giving reason for reproach. The man who has lived without deceit has earned meeting his death in such a manner.

But Dr Halsey posted a different, and rather moving translation made by another:

My cradle stood in a hut of poor parents;
no money, no personnel in sight.
Since then I kept on working my fanner’s land;
my plot was never rested, nor was I.
When the season produced a harvest,
I was the first to mow the grain
and when the farmers travelled the country
in droves, carrying their scythes, all the way to Cirta
I was the first; I was the front mower,
leaving plenty of sheaves behind me.
For twelve harvests I mowed under the burning sun,
then I became a headman
and I was in charge of the teams for eleven years.
My men mowed every field in Numidia.
My hard work, my modest wishes
proved successful in the end: they earned me
a home. I became the owner of a large villa,
and who lives there is never in want.
Life also offered me a bunch of honors:
I was elected to join the municipal council.
In the temple I sat in the seat of honor
and from a peasant I became a censor.
I got sons and I had the privilege of seeing them grow up,
as well as grandsons, whom I loved very much.
By living well I had many beautiful years.
No vicious neighbor’s tongue to ruin it.
Dear People, leam to live without sin;
he who lives without blame has earned the right to die blamelessly.

The Latin text can be found in the Clauss-Slaby database as EDCS-23200467:

The lines at the top probably have no connection with the poem.  Caeselia Namina is a shortened form of a punic name, perhaps Namphamina.

The subject of the poem is known in English as the “Maktar harvester”, as his name is no longer readable.

On either side of the stela are recorded the deaths of C. Mulceius Maximus, died age 30, and S. Aurelius F…nus, who died aged 40.[3]  These are probably late and probably 4th century.

Interesting and new to me.

Did you know that images of the papyrus of the Gospel of Peter are online?  Well, they are, here.  Monochrome, of course (O ye uncircumcised!), but far better than nothing.  A photographic archive of other documentary papyri in the Cairo museum are here (courtesy of the Andrew Mellon foundation which is funding all sorts of wonderful things).

All this is at the Oxford Centre for the Study of Ancient Documents.  The links section, under “Online Corpora of Papyri and Inscriptions” has a  bunch of links to online access to things.  The list alone is worth looking at, if, like me, you had no idea these existed.

Somewhere there is a link to a database of Latin inscriptions called Clauss Slaby. It is just a fantastic resource and includes most of the Corpus Inscriptionum Latinarum [CIL] and many  others.  Try entering ‘Mithra’ or ‘Mithrae’ in “Search text 1” and get a mass of dedicatory material.

I also tried “Attin”, for Attis, and got more material still, at more length.  It’s not just inscriptions, but documentary material as well – letters, for instance.

The inscriptions are expanded, which makes it more useful yet.  Of course you do need to know a bit of Latin to get the most out of this!

Carefully hidden in a mass of irrelevant and annoying pages in German is a site which has a search tool for the big list of people from the Roman empire — the prosopography of the Roman empire — here.   Follow the Stichwortliste: Eingangsseite link.

Of course a lot of the links are to people who haven’t realised that websites are for putting stuff online; pompous institutes that just list their Dead-Tree Press publications, as if in some kind of dull brochure.  But a very encouraging number of the sites have content!

The CSAD site is for more than just inscription-sniffers.  It is of wide use to those of us wandering around trying to find out about Attis, or Mithras, or whoever.  These people are doing some really valuable work.  Recommended.