People online asking about fragments of Papias, who knew the apostles, lead you to obscure authors.  I had heard the name of Theophylact before, but never knew much about him until today.

The biblical commentaries of Theophylact — who was Byzantine Archbishop of Bulgaria — fill four volumes of Migne, 123-6.  Somewhere in one of them is a quotation from Papias, discussing the fate of Judas.  It seems reasonable that this is in the commentary on Acts, in vol. 125, and so indeed it is, on cols. 521C-523D.  The “commentary” seems mainly to be a catena, in fact, as might be expected.  Chrysostom Press has produced an English translation of his commentary on the gospels; I don’t know of an English translation of the commentary on Acts.

Here are the relevant portions of Migne: 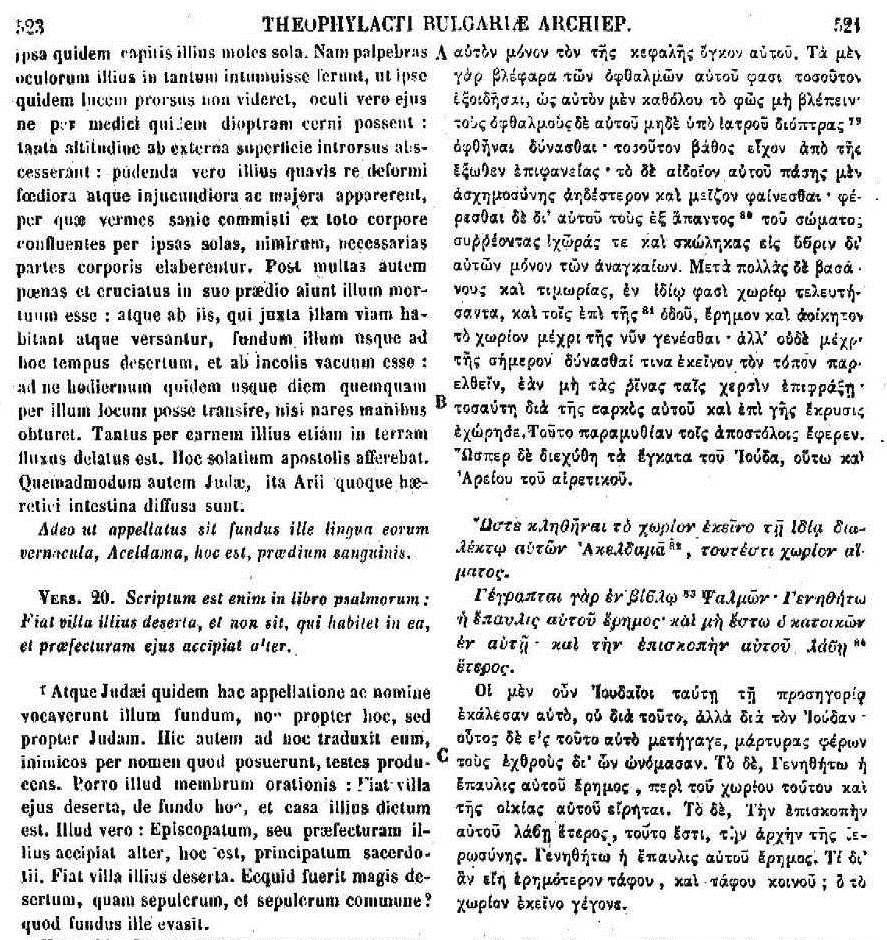 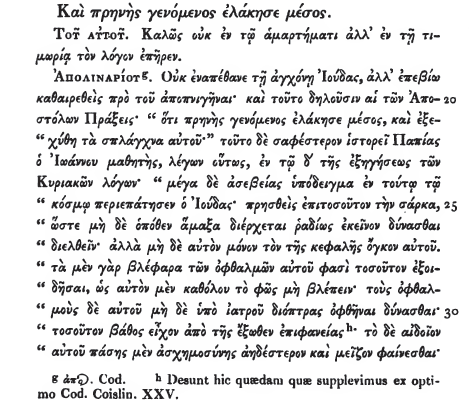 Tom Schmidt has had a real go at getting all the pieces of Papias together, including all the Greek, Latin, Armenian and Arabic pieces, and getting people to make translations.  The whole lot is here.  His notes  by each fragment are also very useful, particularly in the case of the more obscure fragments.  I think this must be the definitive collection for now.  Well done Tom!  The excellent Robert Bedrosian helped out with the Armenian.

A suggestion: it would be nice to have the original language for each fragment online as well, I think.

Few will be aware that there is a passage in Cramer’s catena ascribed to Apollinaris of Laodicea which quotes from the fourth book of Papias on the fate of Judas.  Indeed there are two passages; one from the catena on Matthew (on ch. 27), and another from the catena on Acts (on ch. 1), although in fact it is the same passage quoted at different lengths.  The text of one can be found here.

Judas did not die by hanging, but lived on, having been cut down before choking. And this the Acts of the Apostles makes clear, that falling headlong his middle burst and his bowels poured forth. And Papias the disciple of John records this most clearly, saying thus in the fourth of the Exegeses of the Words of the Lord:

and then one of two versions:

Judas walked about as an example of godlessness in this world, having been bloated so much in the flesh that he could not go through where a chariot goes easily, indeed not even his swollen head by itself. For the lids of his eyes, they say, were so puffed up that he could not see the light, and his own eyes could not be seen, not even by a physician with optics, such depth had they from the outer apparent surface. And his genitalia appeared more disgusting and greater than all formlessness, and he bore through them from his whole body flowing pus and worms, and to his shame these things alone were forced [out]. And after many tortures and torments, they say, when he had come to his end in his own place, from the place became deserted and uninhabited until now from the stench, but not even to this day can anyone go by that place unless they pinch their nostrils with their hands, so great did the outflow from his body spread out upon the earth.

Judas lived his career in this world as an enormous example of impiety. He was so swollen in the flesh that he could not pass where a wagon could easily pass. Having been crushed by a wagon, his entrails poured out.

The Greek of both may be found on pp.22-30 of Lake’s The Beginning of Christianity (thanks to Andrew Criddle for the reference).  Lake comments that further research in the catenas would probably allow the text to be improved; one may wonder whether anyone has done so since.  He continues:

It will be seen, however, that these versions differ in one very important point. In the catena on Acts the whole story is attributed to Papias; but in the catena on Matthew the quotation from Apollinarius  which contains the extract from Papias ends with the statement that Judas was crushed by a wagon, and a new extract from Apollinarius then begins and gives a more elaborate and gruesome account of the swelling up and death of Judas. These two versions do not agree;  in one the wagon is the cause of death, in the other it is part of the comparison and only mentioned to show the extent to which Judas was swollen. The question is whether the crushing by a wagon or the longer version ia really that of Papias.

The matter cannot be settled with certainty, but J. Rendel Harris has tried to bring the balance of probability to the side of the attribution of the longer version by pointing out in the American Journal of Theology, July 1900, p. 501, that Bar Salibi in his commentary on Acts quotes the passage about the [Greek], and definitely ascribes it to Papias. It is extremely improbable that Bar Salibi used the catena of Andreas, so that this is independent evidence that the passage was taken from Papias by Apollinarius.

If so, Papias described Judas as living after the betrayal, and dying from a disease so terrible that his estate remained unoccupied. Among the symptoms mentioned was extreme swelling, so that a place where a wagon could pass was too narrow for him. This comparison gave rise to  a secondary form of the story which represented Judas as crushed by a wagon. …

On  the other hand, general probability would perhaps suggest that the shorter version is likely to be original If so, the gruesome details and the changed form of the longer version is due to a desire to pile up horrors and to make the death of Judas similar to that of other notoriously evil men, such as Herod the Great or Nadan in the story of Ahikar. To me this seems somewhat the more probable hypothesis. Whichever view be taken, Papias clearly represents a tradition different both from Matthew and from Acts.

Lake continues, examining a lot of early and interesting witnesses on the various explanations of the death of Judas, and how these were harmonised.

It would be nice to know what Dionysius bar-Salibi says.  Note that here again we have a 12th century Syriac author being used as a witness to an ancient text!