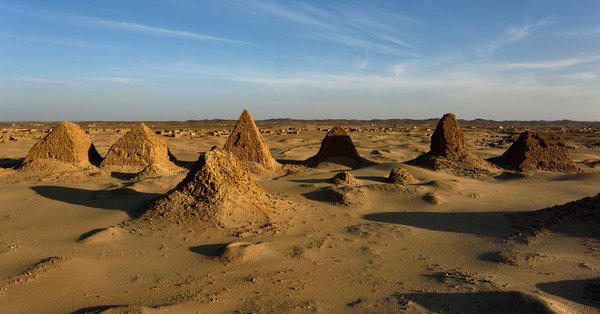 An expedition is investigating the burial chambers under some of the pyramids of Nuri in Sudan.  Rising ground-water means that these are drowned in water, and so inaccessible.  Indeed some may never have been accessible since ancient times.  The expedition website is http://www.nuripyramids.org/.

Dive beneath the pyramids of Egypt’s black pharaohs

Somewhere below the surface of the kiddie-pool sized patch of brown water is the entrance to the 2,300-year-old tomb of a pharaoh named Nastasen. If I crane my neck back far enough, I can just make out the eastern flank of his pyramid rising nearly three stories above me.

It’s a sweltering morning in the desert of northern Sudan, the land of Nubia in the time of the pharaohs. Sweat drips into the dive mask hung around my neck as I negotiate my way down a narrow, ancient staircase cut deep into the bedrock. Waterproof flashlights clank from each wrist, and a 20-pound weight belt is slung commando-style across my chest. An emergency container of air, no bigger than a can of hairspray, is secured uncomfortably in the small of my back.

At the bottom of the stairs, archaeologist and National Geographic grantee Pearce Paul Creasman is standing chest-deep in the muddy water. “It’s really deep today,” he warns. “There’s not going to be any headroom in the first chamber.”

It’s a fascinating article, and some gorgeous photographs.  Apparently there is a TV programme too: “Black Pharaohs: Sunken Treasures”, to be broadcast today in the US.

On our final dive, Creasman and I float silently in water in the back chamber of the tomb, hovering above what may very well be Nastasen’s undisturbed sarcophagus. We talk about the team’s goal for 2020: to excavate the pharaoh’s 2,300-year-old submerged royal burial chambers. It’s an audacious aim and a huge logistical challenge, but Creasman is optimistic.

“I think we finally have the technology to be able to tell the story of Nuri, to fill in the blanks of what happened here,” he says. “It’s a remarkable point in history that so few know about. It’s a story that deserves to be told.”

(Note that the article is easier to understand if you first look at the map of where they are diving, in the middle of the page!)

Last night a TV program showed a trip up the Nile as far as Khartoum.  They stopped off at the pyramids at Meroe, which looked spectacular as always.

Hunting around the web for some images, I stumbled across this page.  It’s full of photos from a trip to Sudan, all excellent and evocative, and I really recommend a click.  Here’s the image of the pyramids:

This gorgeous image by Vit Hassan is of Meroe:

This via Egyptology News.

Reading of Jim West’s trip to Egypt reminded me that I was looking for somewhere to go just before Christmas, to fight off the winter blues.  I was thinking about flying out to Khartoum.  After all, the location is right for sunshine in December, and spending a week in a good hotel relaxing wouldn’t be very arduous.

I came across the Tripadvisor website, for “Sudan”.  This site is quite useful for hotel reviews, although for Luxor some of the hotel-keepers have started to game the system with fake reviews.  (You can tell, because they’re tiny places no-one has ever heard of!)  But the reviews for Sudan were enlightening.

You see, I reasoned that the rulers of Sudan, as in any third-world country, enjoy acquiring foreign aid.  Those Mercedes-Benzes cost hard currency, after all!  So they would need to have at least one good hotel for all the fat-cats to stay in, while being wined and dined, preparatory to handing over money exacted from poor people in rich countries to the rich people who keep poor countries poor (as the saying has it).  If so, I too could stay in it.

The results are pretty awful.  There is the al-Rotana, which seems the probable hotel that I had in mind, charging $200 a night.  But look at the rest!!?!

The best hotel is apparently run by Greeks, which will amuse those who have read the “River War” by Winston Churchill.  Churchill, who was going up the Nile with Kitchener against the dervishes, and indeed G. W. Steevens in his “With Kitchener to Khartoum”, makes regular mentions of Greek hoteliers as the only source of civilisation!  Perhaps the Sudan has slumped back into the state that it was in a century ago — the victim of 50 years of failed policies.

PS: I looked at the UK Foreign Office advice here.  The list of disease outbreaks was pretty interesting.  You know, I don’t really want to experience all that…

PPS: I’ve been laughing all evening about the hotel reviews, which were in order of preference.  Most countries list hotels by resort.  This one contains the only 14 hotels in the country.  The first one sounded rather dodgy.  The second was the corporate one I referred to.  But the review of third one started witha single word, doubtless written with a shudder of memory: “horrible”.    One can imagine the pale and desperate frame of mind of the ‘guest’ in which that was the first word that came to mind. What hotel number 14 was like I cannot imagine!