In 1866 a lecture was given by a certain Dr Charles William Russell (d.1880), President of Maynooth College, with the title, “Cardinal Mai and the Palimpsests”.  This contained the following statement, which has been repeated in some form now for 160 years.

The practice [of palimpsesting] continued, in a greater or less degree, under the later emperors ; and there is a beautiful allusion to it in one of St. John Chrysostom’s Homilies,+ in which he compares the mind upon which evil impressions had once been made to a palimpsest parchment in which, however carefully the old characters and lines are sure to appear peeping the new writing.

It appears from the introduction of the editor that the text of the lecture was discovered, unpublished, among the papers of the author.  So it was printed in the Irish Monthly 38 (1910), p.301-315, more than forty years after it was delivered.

These words have had a literary afterlife quite disproportional to their origin.  When the claim is quoted, a reference is given to the homilies on Matthew, if at all.  But there is no sign that the reference has been verified.  Indeed a correspondent, Prof. Johnnie Gratton, formerly of Trinity College Dublin, wrote to me a week ago and raised the question, which drew my attention to the matter.

Our first port of call is the original article, which is in JSTOR here.  This gives a footnote, which reads, in its entirety, “Matth. xxvi. 4.”  But there is no homily of Chrysostom on that verse; indeed Chrysostom only refers to the verse once, according to the Biblindex database, and that in his 15th homily on Romans.

I then came across a possible answer, in a Ukrainian paper, of all possible sources.  The article has an English abstract and is Daria Morozova, “The school of Antioch and its pedagogical metaphors”,  in: Мultiversum: Philosophical almanac 1 (2020),188-201 (online here).   Thankfully Google Translate handles this well. Dr. Morozova begins:

In Antiochian authors, as in all Byzantine patristic in general, several pedagogical metaphors of ancient origin compete, which in very different ways – and in diametrically opposite ways – represent the nature of the educator’s influence on the child. Perhaps the most common pedagogical metaphor until now is the image of a blank sheet (tabula rasa), on which he outlines his meanings …  If the metaphor of a blank sheet comes from the materialist psychology of Aristotle (De anima, III, 4, 429b – 430a), …

Chrysostom refers to the first paradigm – tabula rasa – very often, but it has a slightly more complex configuration. Instead of a “blank sheet”, John imagines a palimpsest with many layers of text, where each new recorded text hopelessly hides everything from sight. In one of the exegetical sermons (In Matt. 11.7), John rebukes his (adult) listeners for treating worship as a sad duty and not as a fascinating learning process in which the teachers are “prophets, apostles, patriarchs. and all are righteous. ” After singing a few psalms, they carry home “empty charters” (κενὰς… δέλτους), which, however, are not really empty. After all, at home the faithful allow passions and all the hustle and bustle of life to flood their hearts with “spam”, which makes them deaf to the divine lessons of the liturgy.

“That is why,” John complains, “when I take your charters (δέλτους), I cannot read them. I do not find the letters that we write down for you on Sundays (…), but I find others instead – meaningless (ἄσημα) and distorted. We, wiping them (ἐξαλείψαντες), write what is from the Spirit, and you, leaving here, surrender your hearts to the devil’s actions (διαβολικαῖς ἐνεργείαις), and again give him the opportunity to rewrite.” (In Matt. 7.7: PG 57, 200).

Therefore, Chrysostom asks his children: “Wipe away the letters or, more precisely, the imprints (χαράγματα) that the devil has engraved (ἐνετύπωσέ) in your soul, and bring me a heart free from all the confusion of life, so that I can write freely, to him that ho-chu”.

Spiritual education in this description resembles a certain information war, where opponents tirelessly rewrite texts on the tablets of hearts (“others against others”, ἕτερα ἀνθ ‘ἑτέρων). Thus, within the usual metaphor of a blank sheet, pedagogy is no longer presented as a one-time path from zero to 100% completeness, but as a virtually endless process of editing.

Note that I don’t know a letter of Ukrainian, nor even the Cyrillic alphabet, so all this is from Google Translate.  It’s remarkably good, isn’t it?

Here, I think, we have a modern researcher independently reading Chrysostom and concluding that a palimpsest is involved.  Better still, we have references!  Let’s see what they say.

Luckily we have a complete translation of the Homilies on Matthew.  They were originally translated for the Oxford Movement Library of the Fathers of the Catholic Church series.  Sir George Prevost made the translation, and it was published as volumes 11 and 15 in 1843, and vol. 34 in 1851.  These were then pirated for the Nicene and Post-Nicene Fathers series, and slightly revised to update the language, formatting and footnotes.  The translation was made from a different edition, in which the material is in chapter 9.  The LFC may be found here.  Here’s the NPNF:

And yet our teachers here are more in number and greater. For no less than prophets and apostles and patriarchs, and all righteous men, are by us set over you as teachers in every Church. And not even so is there any profit, but if you have joined in chanting two or three Psalms, and making the accustomed prayers at random and anyhow, are so dismissed, you think this enough for your salvation. Have ye not heard the prophet, saying (or rather God by the prophet), This people honors me with their lips, but their heart is far from me?

Therefore, lest this be our case too, wipe out the letters, or rather the impressions, which the devil has engraven in your soul; and bring me a heart set free from worldly tumults, that without fear I may write on it what I will. Since now at least there is nothing else to discern, except his letters — rapines, covetings, envy, jealousy.  Wherefore of course, when I receive your tablets, I am not able so much as to read them. For I find not the letters, which we every Lord’s day inscribe on you, and so let you go; but others, instead of these, unintelligible and misshapen. Then, when we have blotted them out, and have written those which are of the Spirit, you departing, and giving up your hearts to the works of the devil, give him again power to substitute his own characters in you. What then will be the end of all this, even without any words of mine, each man’s own conscience knows. For I indeed will not cease to do my part, and to write in you the right letters. But if you mar our diligence, for our part our reward is unaltered, but your danger is not small….

The use of the word “impressions” confirms that we are dealing with the passage that Dr Russell had in mind.

The translator, Sir George Prevost, has rendered δέλτος as “tablet”, meaning a writing tablet.  Likewise the modern Latin translation in the PG edition renders it as “tabula”.  The wonderful Logeion site here confirms this understanding. 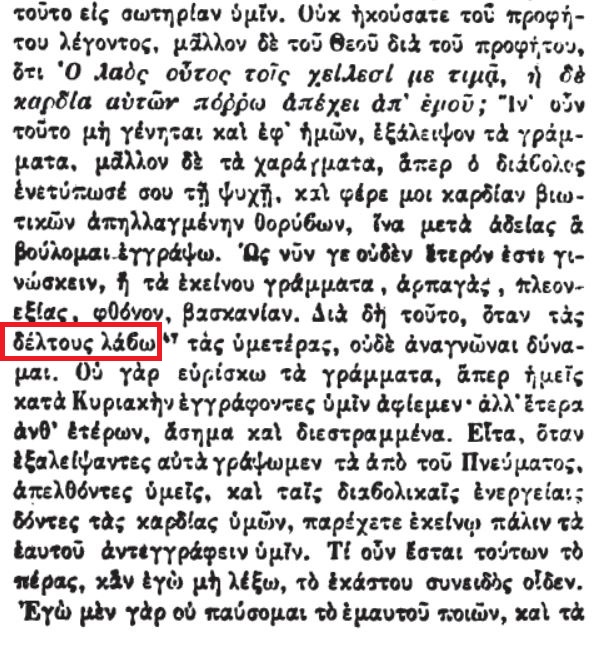 My correspondent also drew my attention to a passage in the next chapter, where we have the phrase “the tablet of the mind”:

But in order that the same may not happen again — that you may not, having here admired what is said, go your way, and cast aside at random, wherever it may chance, the tablet of your mind, and so allow the devil to blot out these things — let each one, on returning home, call his own wife, and tell her these things, and take her to help him

Nowhere is the word “palimpsest” used, tho.  The text refers solidly to a youth’s tablet, used for writing, where the text can be erased and fresh text written.  The idea of half-erased impressions is definitely present – but refers to wax tablets, not to parchment erased and rewritten.

Not every reader of this blog will be familiar with Roman wax tablets.  These are well known, and many resources for them exist online.

A thin wooden frame contained a central surface of wax.  The writer used a stylus with a pointed end to write.  The other end was flat, in order to erase it.  A depiction from 480 BC of just such a tablet in use is known to us: (h/t Michel Lara) 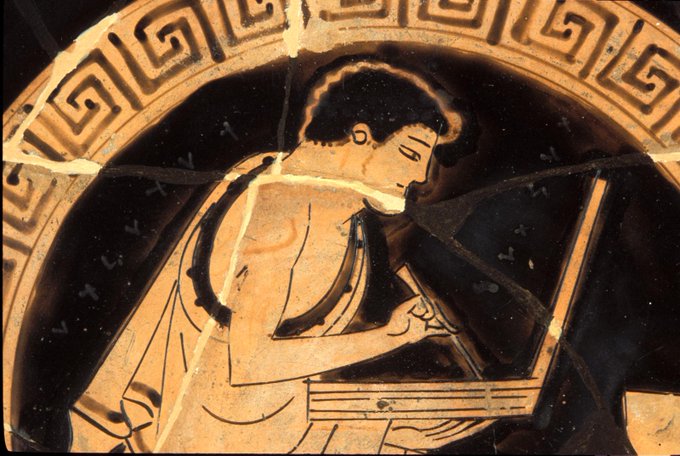 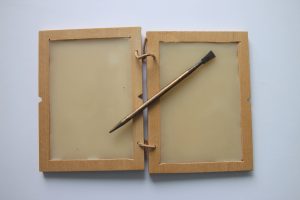 With luck we can now put an end to the “Chrysostom talked about palimpsests” myth.

This evening I had an email from Matti Mousa, who has translated the whole of Michael the Syrian’s enormous Chronicle from Syriac into English, and is now revising it.  He very kindly condescended to ask if I had any suggestions about what should go into the introduction.  Well, I always have opinions!  So I offered mine, and I hope that wasn’t far too much!

Meanwhile I was wrestling with the British Museum database of objects, when I came across a set of wax tablets.  They were excavated at Hawara in Egypt in 1888, and date from the Graeco-Roman period.  The tablets are of wood, and have a recess into which wax was placed.  The wax was written on, with a hard point.  The other end of the stylus was flat, and could be used to erase the marks in the wax, so the tablet could be reused.  Careless users tended to scratch the wood, by writing too deeply in the wax.

Here’s the image.  What a pity that the catalogue does not mention what the inscription on the tablets is!