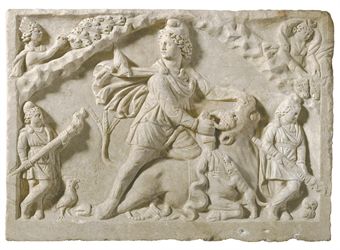 Few of us will be aware that there are good quality images of past sale objects on the website of Christie’s, the fine art dealers.  But an accident took me there this evening, and I found half a dozen objects relating to Mithras, which had been sold over the last 20 years.  There were photographs of most of these.  I rather doubt that any of them appear in the catalogue of Mithraic monuments and objects, the CIMRM, although of course it is very hard to tell.

Naturally I have added these to my own modest catalogue online of monuments and objects.  I hope that Christie’s will not mind. 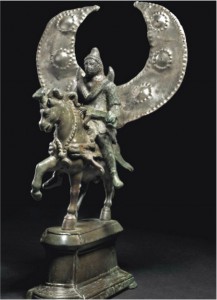 One item in particular caught my eye; a statuette supposedly of Mithras-Sabazios.  Sabazios is usually identified with Jupiter or Dionysus.  What I do not see, however, is why we should suppose this to be Mithras?  Merely wearing a phrygian cap is not enough … is it?

There were no such items in the CIMRM, which is telling, perhaps.  I have included it in my own catalogue, but with misgivings.

4 thoughts on “Finding interesting things at the Christies web-site”