In early 396 AD Paulinus of Nola wrote a letter of consolation to his friend Pammachius which contains an interesting passage on the entrance courtyard at the front of Old St Peter’s.[1]

It is a pleasure even now to linger on the sight and the praise of such a great work. For we do not laud the works of a human being but the divine works accomplished through a human being. What a joyous spectacle did you [Pammachius], sacred producer, display for God and his holy angels from this—as the saying goes—rich provision of yours.

With what great pleasure did you exalt the apostle himself when you packed his whole basilica with dense crowds of needy people, where—under the height of its roof with ceiling panels in between—the spacious church lies wide open; and where, glittering from afar with the apostolic tomb, it binds the eyes and gladdens the hearts of those who enter.

Where, under the same massive roof, the church expands on both sides with double porticoes and where, with the church extended through a vestibule (vestibulum) in front, there is a bright atrium; where a cupola (tholus) topped with solid brass adorns and shades a cantharus, which belches forth streams of water serving our hands and faces.

Not without secret meaning does it surround the water spouts with four columns; such a decoration is proper for the entrance of the church in order that what is done inside by the mystery of salvation may be marked by the noteworthy work outside. For one single faith of the gospel also sustains the temple of our body with a fourfold support; and, since the grace by which we are reborn flows from it, and Christ, in whom we live, is revealed in it, surely a fountain of water springing to eternal life is born in that place for us on four columns of life; and it waters us within and boils in us, if only we should be able to say or deserve to feel that we have a burning heart on the road, which is kindled when Christ is walking with us. (Ep. 13:13)

That the basilica hall itself was filled by Pammachius with the needy, to whom he was giving charity, is itself interesting in 396 when, presumably, the sportula was still being distributed by the state. 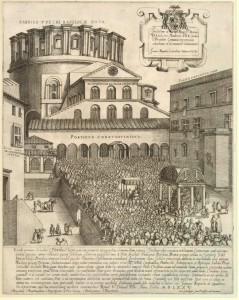 The “cantharus” is some sort of fountain, and the 1575 image above shows the curious construction that stood there towards the end: a large canopy decorated with bronze peacocks, resting on eight porphyry columns, with the colossal bronze pine-cone inside it which spurted water from various apertures.

But this construction does not seem to be original.  Paulinus refers above to four columns, not eight.

Our earliest literary source for the fountain in the atrium outside Old St Peter’s is the Liber Pontificalis, which records under Pope Symmachus (498-514) that:[2]

He built the basilica of Saint Andrew, the apostle, near the basilica of the blessed Peter. [A list of gifts made to the shrines] Also he adorned with marbles the basilica of blessed Peter.  The fountain of blessed Peter with the square portico around it he beautified with marble work and with lambs and crosses and palms of mosaic. Likewise he enclosed the whole atrium; and he widened the steps before the doors of the basilica of Saint Peter, the apostle, and he made other steps of wood on the right and on the left. Also he built palaces in the same place on the right and on the left. Also, below the steps into the atrium, outside in the square, he set another fountain and an accommodation for human necessity. And he built other steps for ascent into the church of blessed Andrew and set up a fountain.

The “basilica” of Andrew is in fact the converted circular 3rd century tomb that stood on the south side of St Peter’s until the 18th century.

But the key phrase is translated differently by van den Hoek (p.21):

He embellished the area around the cantharus of Saint Peter with a quadruple porch made out of marble and he adorned it with lambs and crosses and palms made of mosaic.

Whether we should interpret this as meaning that the fountain already had a square portico around it, which Symmachus decorated with marble, or that he created the portico, is unimportant for our purposes.

Even after this, there were more changes.  The eight porphyry columns – which survive – did not arrive until Pope Stephen II (752-757 AD).  A mysterious piece of evidence is quoted by van den Hoek from a source which unfortunately I have no present access to:[3]

In the atrium in front of the entrance (of the church) of the Blessed Apostle Peter, which is called the quadruple porch, he renovated [with] eight marble columns of amazing beauty, sculpted, which he placed over a square and he set up a bronze covering above

The reference for this is “Cited in R. Krautheimer, CBCR 5 (1977), 175″.  The CBCR is the Corpus basilicarum christianarum Romae, a series of huge and hard-to-photocopy volumes of impeccable scholarship.  (I see that some volumes are at the Hathi Trust here, if anyone would care to help me access this item).

Van den hoek suggests, probably rightly, that the bronze pine-cone was brought here and installed at this time.  It was certainly present in the 12th century, when Petrus Mallius mentions it in his Descriptio basilicae Vaticanae, chapter 41, p.100[4] (written between 1159-1181):

I don’t quite know how to translate all of that – funes is “ropes”, apparently – but I see that “… in the atrium of the same church, i.e. in the ‘paradis’, in the shape of a cross, and they are tied from the porticos to the bronze pinecone, which is in the paradise”.  So the bronze pinecone was at Old St Peter’s by that time.

Where did it come from?  Well, that must be a story for another time.

NOTE: There are extensive 16th century descriptions and diagrams collected by C. Huelsen in his “Cantharus von Alt-St. Peter”, which I linked to in my last post.

UPDATE: See the comments for a translation of the rest of the Liber on Stephen, and an explanation of what it all means, courtesy of a regular reader!

13 thoughts on “Paulinus of Nola, and the “Liber Pontificalis”, on the courtyard outside Old St Peter’s”