Oxford University Press (USA) emailed and asked me to review this little volume.  I agreed at once.  We need more easy-to-read collections of anecdotes and wit from antiquity, and something of the kind for the Byzantine empire can only be a good thing.  I believe Dr Kaldellis has written two preceding volumes on Roman and Greek curiosities, but I have not seen these.

Such a book is aimed at the educated general reader.  Possibly I am the ideal reader for such a book.  For I collect books of anecdotes, and humour anyway, so I am familiar with the genre; and, although I am not a professional scholar, I do love tales of antiquity, and I am even interested in some parts of Byzantine history.  So… what did I make of it?

The volume is a small hardback, with a quite magnificent cover designed by Brady McNamara.  In fact this photograph from OUP’s website does not do it justice! 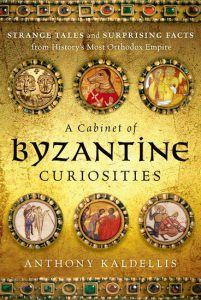 The standard of book manufacture is high – no surprise from OUP.  There are internal photographs inline, taken from manuscripts, in monochrome.  These are not a success, and look very murky.  The idea is very sound; but the images should have been reproduced in colour.  As it is, the eye skips over them.

Dr Kaldellis has assembled some 200 pages of anecdotes, taken from sources mainstream and otherwise.  He gives the source in almost every case, and one can only respect the breadth of reading that is involved, particularly in hagiographical literature.  Translations are his own, and he wisely advises the reader that he has paraphrased where need be to bring out the point for the general reader.  In a book of this kind, intended for entertainment, this is entirely right and proper.

As is usual in these kinds of collections, the material is organised by topic.  A table of contents would be helpful here.  Curiously it starts with marriage and the family; then “unorthodox sex” (!?); animals; food and dining; eunuchs; medical practice;… and so on.  The ordering of this material seemed unusual to me.  Usually such volumes open with military anecdotes, scholarship, and so on, wandering into more domestic items later.  Stuff about the vices of the Byzantines should certainly have been banished to deeper inside the book.

Failing to follow the traditional (!?) order rather undermined the author’s hope to neutralise the picture of the Byzantines as a bunch of decadent back-stabbing effeminate cowardly treacherous superstitious scumbags.  In fact the content left me with precisely that impression.  For instance the negative anecdotes about Byzantine saints, although deeply valuable to me, reinforced the impression of credulous superstition.  Other anecdotes made clear how the Byzantines preferred bribery and treachery to courage, which reinforced the stereotype of weakness and backstabbing.  So here the author fails in his objective.

But this does not weaken the usefulness of the book to me, and probably to others.  I don’t object to the old stereotype in any way.  What the book gives me is solid interesting information from primary sources, that might perhaps not easily be gathered in so compact a form.  For instance how many of us know that St Simeon the Stylite developed an abcess on his foot which dripped stinking pus all down his pillar?  The charlatanry of the monks is well brought out.

And of course such books are rarely read from cover to cover.  Maybe doing so is rather a mistake.  Indeed Dr K. wisely suggests that this is the sort of book to read on the toilet.  Nor is he wrong.  Open it anywhere, read a bit, learn a bit, smile a bit – that is what such books are for.

One decision will strike the reader at once.  The author has decided, unusually, to give nearly all names as a transcription from Greek.  So “Konstantinos” appears all over the place, instead of Constantine (with the absurd result that on one page we have Constantine I facing Konstantinos V!); Ioannes rather than John; and even Isaccios Komnenos for Isaac Comnenus.  This habit, creeping in among some academics, is deplorable.  It achieves nothing, since all of us know what is meant.  It places a barrier in the way of the general reader.  It (again!) vitiates the author’s purpose, to suggest that the medieval Greeks were the Roman successors, when the names are so utterly odd and un-Roman.  This was a mistake, and OUP should have prevented this.  Many ordinary people can empathise with the brave death of Constantine XI, going out in 1453 to die fighting in the streets as the Turks breached the walls of Constantinople.  Nobody cares a bit about a king called Konstantinos XI, whoever he might have been.  I suspect that Dr. K. is not to blame, but these sorts of games, which tend to exclude the ordinary folk, are a form of elitism.

I learned a great deal from the book.  Again and again I found myself drawn, wanting to put down the volume and go and look up the original source.  (In some cases, of course, I remembered the original, and I didn’t detect any significant lack of reliability).

This is not a joke book either.  But the stories are interesting enough.  Anyone interested in Byzantium will find useful stuff in here, relatively easily absorbed.  So I think I can recommend the book, although I would definitely argue against reading it from the front.  Read it on the toilet, read it in bits here and there.  Because of the contents, I cannot recommend it as a gift for the monk in your life, however; which is a shame, since the Most Orthodox Empire is a subject that would otherwise appeal to many of them.

UPDATE: Added links to Amazon with my tag on.