The publication of an English translation of Gelasius of Cyzicus (see here) brings us back to the question of just who was the author.  All the editions until recently attributed this work to “Gelasius of Cyzicus”.  In the recent GCS NF 9 edition, the editor, G. C. Hansen, reviews the origin of this, and roundly dismisses it as a mistake.  He suggests that the author is now unknown.  Consequently he calls it the Anonyme Kirchengeschichte, or AKG.  Under this rather awkward title it has appeared in subsequent literature, although often with “Gelasius of Cyzicus” in brackets.

Hansen’s arguments are not easy to follow unless your German is better than mine.  This is not helped by a page of untranslated Greek quotations from Photius.  But the argument is as follows:

This is well reasoned, as far as it goes.  Hansen doesn’t quote the letter of Morel, but it reinforces his point. 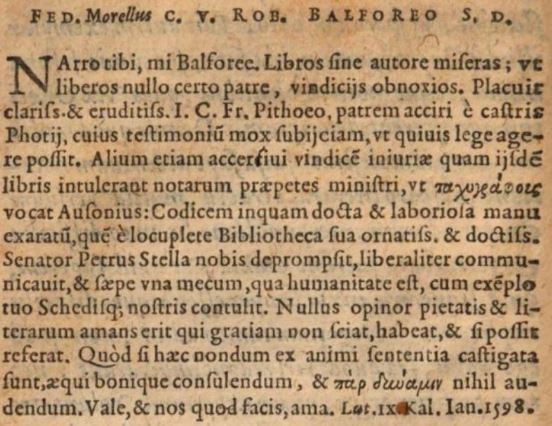 I couldn’t transcribe the Greek, but here’s my attempt at a transcription:

I don’t have time to translate this properly, but, ignoring the fluff, we perhaps get something like this:

Listen, Bob.  You sent me books without an author, like fatherless children, liable to be attributed to anyone.  So I got the really serious scholar Pithou to take a look, who pulled out an author from Photius – quoted below – so that anyone who wants to do legal stuff can do so.  I’ve also hauled up another, rather more carefully written, manuscript for you, thanks to our friend Petrus Stella (Pierre de l’Estoile), whom everyone says is a good guy.

Let’s remember just who Morel is.  As the title page tells us, he’s the publisher of Balfour’s edition.  He’s the guy who’s got to sell it.  Editions of patristic authors were printed for money.

Clearly Morel is not keen on trying to publish an anonymous text, and no blame to him (and I bet the GCS publishers might have felt the same, if anyone had asked them!).  Balfour has told him earlier that the manuscript is rather rubbish.

It’s telling that Balfour prints the letter, rather than taking responsibility himself.  Hansen is right to be wary.  This looks like a commercial consideration, not a scholarly one.  We only have Morel’s word as to what Pithou thought.

What Hansen fails to do is to examine whether there is a case for keeping the name “Gelasius of Cyzicus”.

I think we’d better take a look at what Photius has to say.  These can easily be found in the English translation here by doing a Ctrl-F and searching for “Gelasius” on the web page.

88.  Read an account of the Proceedings of the Synod of Nicaea, in the form of a history, in three volumes. The author states that …  Such is the contents of this book. In another copy, containing the same account, the title gives the name of the author as Gelasius, bishop of Caesarea8 in Palestine. The style is mean and common. Who this Gelasius was, I have been unable to discover for certain, since up to the present I have met with three bishops of Caesarea named Gelasius, and have at least read the works of two. One of these works is a polemic Against the Anomoeans, the two others, one of which we have just referred to, deal with ecclesiastical matters. The title, where we have found it, is Three Books of Ecclesiastical History by Gelasius, Bishop of Caesarea in Palestine.  The work begins as follows : The proceedings of the holy, great, and universal synod of bishops, assembled, so to speak, from all the provinces of the Roman empire and Persia, and so on. … The writer states that he lived in the time of Basiliscus, who seized the throne after Zeno had been driven out, and that he found and read the account of the proceedings of the council written on an old parchment, while living in his father’s house. From his recollections of this, and with the aid of other writings which supplied him with useful information, he compiled his history. He also mentions and cites some passages from a certain Gelasius, whom he also calls Rufinus. He says that he was a native of Cyzicus, and that his father was a priest in the same place. So says the author of this work, and such is its contents.

Photius quotes the opening words of the book, and so we can see that this is definitely our work.

89.  The other book [by the same author, on “ecclesiastical matters”], which I have referred to above, is entitled Preface of the Bishop of Caesarea in Palestine to the Continuation of the History of Eusebius Pamphili. It begins, as follows: …

The author states that he was encouraged to write the work by his uncle Cyril, bishop of Jerusalem. I have read elsewhere that this Cyril and Gelasius translated the history of Rufinus the Roman into Greek, but did not compose any history of their own.

It is evident that this Gelasius was older than the other, if he flourished in the time of Cyril of Jerusalem.  He also certainly differs from him in the greater eloquence of his language, although both are inferior to the author of the treatise Against the Anomoeans, also called bishop of Palestine. For the latter Gelasius, by his diction, learning, and logical methods, his use of which, however, is somewhat inept, leaves the other two far behind, whose style appears to be much inferior. I have not yet been able to learn whether any of these is the author of the [first] work referred to, or who compiled it and supplemented it by his own additions.

So … we have two works, by “Gelasius of Caesarea”.  The second one is clearly a real continuation of Eusebius, based on Rufinus.  The first one, however, is not by the same author – the “eloquence” is pretty limited – but by some other “Gelasius of Caesarea” who says in his work that he was born in Cyzicus.

In cod. 102, Photius also reads the real Gelasius of Caesarea’s Against the Anomoeans, but sheds no more light on our text.

Finally, in the AKG itself, we find this passage:

1.8.1 So far, Eusebius. However, Rufinus, or rather, Gelasius records these things as follows: “After these events, the Roman Senate asked Licinius (who became the Godloving Constantine’s brother-in law by marrying his sister Constantia) to rule together with Constantine. Soon after, Constantine sent Licinius to the east against the tyrant there, in order to see to the safety of the Christians there. For since he enjoyed such great favors from God, the pious Constantine was eager to offer thank-offerings to his benefactor.

This makes perfect sense, now that we know (from Photius) that a Gelasius translated Rufinus into Greek and produced a continuation of Eusebius, along with his uncle Cyril.  This passage becomes evidence that the AKG is using this Gelasius-Rufinus text.

So what do we have?

So Photius tells us that the AKG in his time was attributed in a manuscript to an otherwise unknown Gelasius of Caesarea.  We can tell that the author was born in Cyzicus.  He is not the same guy as the chap who wrote a continuation of Eusebius.

From this, it seems reasonable to say that the author was a chap called Gelasius, who lived in Caesarea but who came from Cyzicus.  Isn’t it reasonable to call him “Gelasius of Cyzicus” so we don’t get mixed up with either of the other two Gelasius’?

The problem here is that, quite obviously, the name “Gelasius of Caesarea” may be a bogus ascription in a manuscript, even in the time of Photius.  One of his manuscripts had no ascription.

It’s a thought, anyway.  It’s not very satisfactory, but it is what is in the historical record.  Should we just stick with Gelasius of Cyzicus?  For convenience, and in honour of Photius?

2 thoughts on “Should we bring back Gelasius of Cyzicus?”