The most accessible early account, of the discovery of an ancient house in the grounds of the Villa Negroni in Rome, is by Camillo Massimo in 1836.  But for his source, Massimo refers to a mysterious volume which is online, but nearly impossible to find.

Search as you will: you will not locate this volume.  You may think “icnografia” is an odd word, and make it “iconografia” but you will be no further forward.  As I remarked a couple of days ago, Lanciani quotes the title as “Iconografia degli Edifizi di Roma antica“, but this too does not help.

After a great deal of searching into the night, I have finally solved the mystery.

It seems that Angelo Uggeri was, to be frank, a complete idiot.  He self-published his works.  And he decided that giving them title pages was unnecessary.  Yes, that’s right.  You can find a volume online, and look through it, and still have no idea what the thing is titled.  Sometimes he shyly had a page which indicated his authorship – in a cursive, hard-to-read handwriting, not printed.

The volumes that I have found, all of them, belong to a series:

The text in these is in two columns, one French, one Italian.  A search for “Journées pittoresques” will return results.  But Uggeri’s maddening habit of leaving out titles means that you will not be that sure of what you have found.  A search in the French National Library site, Gallica, will return only three titles.

Curiously it was the Europeana portal that saved me.  This search gives a list of 10 volumes, all at the BNF, with no distinction of volume number or title.  They all have the same cover.  Many have the same endpapers.  You actually have to look through them to find out what’s in there.

But, blessedly, pasted onto the endpapers of one, I found this slip: 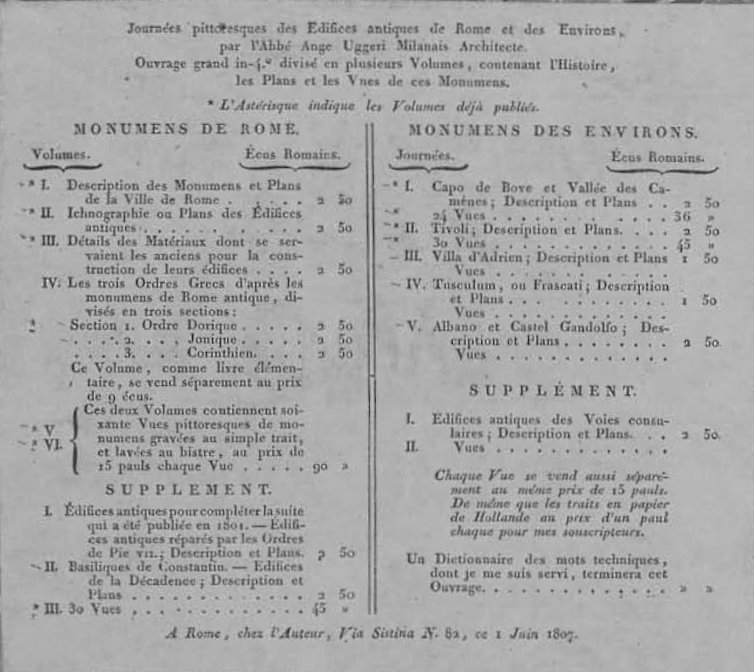 There are two series, each with volume numbers.  In fact some of the “volumes” are also divided into two, one containing the plates, and the other with the text.  I had to download almost the entire collection to find what I wanted.  For my own sanity, and yours if you pass this way, here are the volumes that you need for the Villa Negroni.  I give the link to the BNF for the volume, and attach a PDF of the relevant pages.

The scans are not very high resolution, it must be said.  The volume 2 floor plan is too small to read the scale, for instance.  Let us hope that a German library like Arachne scan some volumes.

From all this we learn that the actual title of volume 2, insofar as there was one, was “Ichnografia”! But I suggest we always refer to Journées pittoresques and specify the series, Rome.

The other two sources given by Massimo deserve a mention, while we are discussing bibliographical mazes.

The “manifesto” is actually a printed flyer, by Camillo Buti, proposing the publication of the frescoes of the house, and including a couple of samples, and a floor plan.  This is the very earliest account.  It is indeed extremely rare, and, as far as I can tell, not online.  But I learn from an article by H. Joyce[1] that “Copies of the Buti Manifesto are in the British Library, Department of Manuscripts, Add. Ms 35378, fols. 316-17, and the Victoria and Albert Museum, Department of Paintings, Tatham Album, p. D. 1479 – ’98. /2”.  Doubtless other copies are around.

The “Roma antica of Ridolfino Venuti with the additions of Stefano Piale” is another vague title.  Volume 2 of the first edition is here at Arachne.  The actual title is “Accurata, e succinta descrizione topografica delle antichità di Roma”, printed in 1763 – too early.  Volume 1 of the third edition (1824) of the Stefano Piale re-edition is at Google Books here; volume 2 here.  The text referred to is in vol.1, chapter 5, p.169 f.  But it contains nothing of special interest.  (Update: 2nd ed., 1803, vol.1, p.125 is here).

One final item is mentioned by Joyce.  It too is not online, and indeed sounds very inaccessible:

The architect Camillo Buti was quickly called in to make a plan of the house. Buti published the plan in 1778, along with a brief description of the rooms, in his Manifesto announcing the publication of the first two in a series of engravings of the house’s paintings.(5) An early annotated version of the plan drawn by someone present in the early stages of the excavation (the excavation is shown and described as incomplete) is now in the Townley collection of “Drawings from Various Antiquities” in the British Museum.(6)

6.  Although the Townley plan is incomplete, it includes information about the house’s decoration not given in any published source. I am grateful to Donald Bailey of the Department of Greek and Roman Antiquities for locating this drawing and supplying me with a copy.

The invaluable Joyce article – which I obtained today – makes plain that the Townley plan is of the highest importance.  It alone tells us, for instance, that the entrance door to the villa had a window above the door.  The “blank wall” facing the door in fact had three niches for statues in it – “Ingresso principale nella casa dipinto con Architetture e nichie di relievo dipinte dentro.”  And so on.