We don’t get a lot of new ante-Nicene material these days, which is why such a piece is very welcome.  Peter I of Alexandria was put to death in 311 AD in the persecution of Diocletian.

This fragment of a sermon is preserved in Coptic.  Anthony Alcock has translated it, and here it is!

Well worth reading!  Thank you Dr. A.  It’s always good to read material written before the church was legalised.

Anthony Alcock has emailed in an English translation of another Syriac text.  This one is a hagiographical text, perhaps of Nestorian origin, on the Emperor Maurice.  It’s here:

Dr Alcock has sent over a translation of two texts, one Greek, one Coptic, of the Trial and Acts of St. Apollonius.  I’m a bit pressed for time this evening so I will release it as is:

It is great to have these, though.  Thank you!

Anthony Alcock has sent in another of his excellent translations from Coptic.  This time it is a hagiographical text, the Martyrdom of Theodore the Anatolian, or Oriental.  It is translated from a Bohairic Coptic text preserved in Codex Vaticanus 63 ff. 28-54.  The text was edited by I. Balestri and H. Hyvernat in the Acta Martyrum (1907), p.34-62 (in the second half of the volume), with a Latin translation on p.30 f.  This is online here.

Here is Dr Alcock’s English translation, which is very welcome:

Most hagiographical texts belong to the 5-9th century; no doubt this does also.

There is a plate from a 9th century Morgan collection manuscript, of which details are here and here, and which contains a version of the Life in Sahidic Coptic (facsimile online at Internet Archive here).  The webpage labels him as Theodore Tiro. 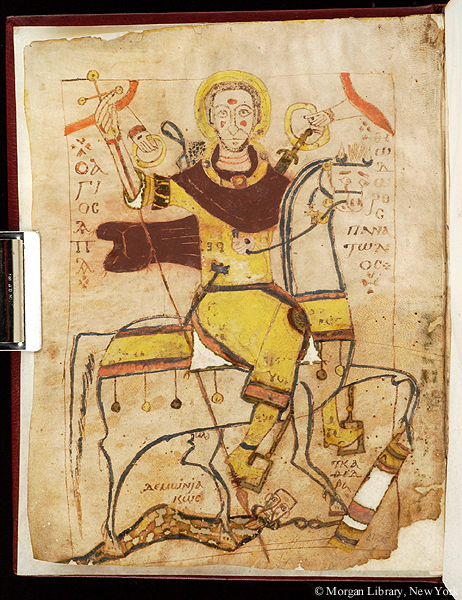 There seems to be quite a  bit of confusion about the various lives of St Theodore, and whether he is one saint or two!  There are several lives in Greek, listed in the Bibliotheca Hagiographica Graeca (BHG) entries 1760-1773.  Unfortunately none of the material indicates which Greek life the Bohairic corresponds to.

But it is useful to have this text in English!  Thank you!

Dr Alcock has kindly sent over two new translations in the last week.  I am too busy to do them justice, but I am glad to make them available here:

Anthony Alcock continues to turn Coptic texts into English.  His latest contribution to us all is a translation of the Coptic version of pseudo-Chrysostom, De Susanna Sermo, a homily on the apocryphal book of Susanna:

Both are useful.  Thank you!

Anthony Alcock has sent in a translation of a curious anonymous Greek text in 8 chapters, concerning the Apotelemata (Talismans) of Apollonius of Tyana.  The content is astrological, concerned with names and words.

The work appears in medieval Greek astrological manuscripts, but also in a Syriac version as an appendix to the gnostic apocryphal Testament of Adam, itself perhaps dating from the 2-5th centuries AD.  There are also Armenian versions of part of it, themselves clearly translated from an unknown Arabic text.[1]

The translation is here:

I was able to find some discussion of this work in an article by Christopher P. Jones, “Apollonius of Tyana in Late Antiquity”, in: S.F. Johnson, Greek Literature in Late Antiquity: Dynamism, Didacticism, Classicism, 2016, p.57 f. The article is online here.

“… Boll thought the work an ‘impudent ﬁction’ composed shortly before Eusebius’ Reply to Hierocles, while Nau was inclined to defend it as genuine; the obviously later ingredients, such as the reference to a church built by Apollonius in Tyana, he explained as later interpolations. The work cannot be by Apollonius and, as Speyer has noted, must be much later than Boll supposed, though it is still an interesting document deserving of consideration here. …

The writer reveals his Christianity at every point, both in his subject-matter and in his choice of words. He thinks that Apollonius was born early enough to predict the birth of Christ, and even (if the obvious interpretation is correct) that he founded a church in Tyana.

As for language, ναός denoting a Christian church is ﬁrst apparently found in Eusebius, and προσκυνητός seems almost entirely a Christian usage. For στοιχειόω in the sense of ‘enchant’, ‘perform talismanic operations upon’, Sophocles’ Greek Lexicon of the Roman and Byzantine Periods cites no example before Theophanes Continuatus (not earlier than the ninth century).

A span of 800–1200 is presumably about right for the composition of the work. It may be relevant that Tyana was an episcopal see as early as 325, and after being lost to the Arabs was recovered for the Byzantine empire in the tenth century; the site has also produced remains of a church datable to that same century.

Though irrelevant to Apollonius’ fortunes in late antiquity, therefore, the treatise shows the same acceptance of him into Byzantine Christianity that is implied inter alia by his appearance in art as a prophet of Christ.

Anthony Alcock has emailed me a new translation of his.  This time it is a piece from the early 6th century by Zacharias Scholasticus, the Life of Isaiah the Monk, of Scetis in Egypt.

Thank you very much for doing this for us all!

Dr Alcock has translated one of the Nag Hammadi gnostic texts, and annotated it for use by students.  It’s here:

Thank you very much!