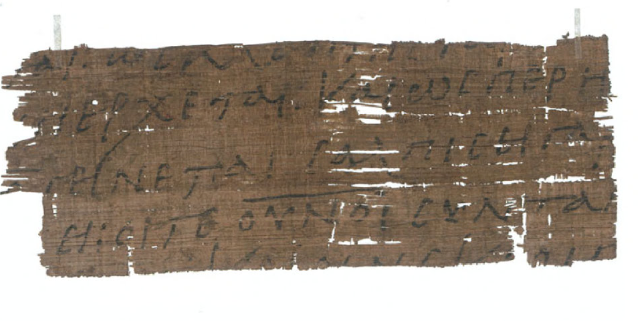 A rather splendid Greek sermon appears in the Clavis Patrum Graecorum as entry 4622 (vol. 2, p.577-8), among the spuria of Chrysostom, with the title De salute animae (on the salvation of the soul).  Some mss. attribute it to Chrysostom, others to Ephrem Syrus.  It exists in two versions in Greek, and also in Coptic, Georgian and Arabic versions.

The content of the sermon is terrific!  It is an exhortation to Christians not to be led astray by the things of this world, but instead to strive to work out our salvation and to be what Christ wants us to be.  The writer points out how futile the distractions will look on judgement day.

Adam McCollum drew my attention to this obscure work, and he has kindly translated the two Greek versions for us.  The translation is given in parallel columns, so that the differences can be seen.  As is quickly apparent, this is one sermon that has been reworked by a secondary author.

Since the two are in parallel format, there’s only a PDF of this at the moment.  (It is also on Archive.org here)

As with all my commissions, I place this in the public domain.  Do whatever you like with it, personal, educational or commercial.

A rather baffling reference to “Ephraem the Syrian, Contra Haereses 79″[1] turns out to be a reference to Hymns against Heresies 22, 4, which, by happy chance, was translated for us a while back here.  Here’s the relevant section:

Response: May the good one turn them to his fold!

(This stanza has no main verb: it seems to be a list of why these groups are considered heretics.)

This does not tell us much.  But it would seem that this was written before Epiphanius wrote the Panarion, as Ephraim died on 9th July 373 AD,[2] and the Panarion was written as a continuation of the Ancoratus (374 AD), and was in progress in 375 and completed in 377.[3]  If so, it must be independent of it.

The same source also refers to “Pseudo-Ephraim, Testament 58″.  I have not been able to discover what this text is, unfortunately.

The 56 Hymns against heresies of Ephraim the Syrian are not online in English, and it does not seem that any published English translation exists.  Sidney H. Griffith has published extracts in English.  The work was published by E. Beck in CSCO 169 (text) and 170 (Latin translation) in 1957, but of course none of us can access this.

Yet a German translation of the work appears in the old Bibliothek der Kirchenvater series, so this suggests that an older edition must exist, which might be online somewhere.  I can only suppose that it is buried in some complete edition of Ephraim’s works. Hmm.

The NPNF series includes some works by Ephraim, translated by John Gwynn, and the introduction refers to “the great Roman edition, S. Ephraemi Syri Opera Syriaca (Rome, 1743).”  The old Library of the Fathers series included a volume of Selected works, which includes a “rhythm against the Jews” which does not seem to be elsewhere and might profitably be placed online.

The “Roman edition” is not easy to find, unless you know that Brigham Young University has  a collection of Syriac books.  It is here.

UPDATE: Yes, well, it might be “here” but I can’t persuade the site to work, either in IE8 or in Chrome.  Why can’t I just download a PDF?!

UPDATE2: Looks as if another copy is here, at the Goussen library.    But it looks as if one can’t download whole volumes, which is very frustrating.  Looks as if there are two series, each of three volumes; series 1, the Greek and Latin works; series 2 the Syriac ones.

UPDATE3: Yay! Found one volume at Google books, here.  Wonder which one? Ah, it’s vol.2 of the Greek and Latin series.  Hit the “About this book” link, and somewhere down the bottom I’m getting other volumes (isn’t Google Books useless for multi-volume works?).  Here’s what I get, after much poking around:

Phew.  That was hard work.  But there we have it … all the volumes of this series.

Wonder if any of them contain the Hymni contra haereses?  I think that might be a question for tomorrow!

Dominique Gonnet from the Sources Chretiennes has drawn my attention to a little known Greek Orthodox site, http://www.anastasis.org.uk/.  It is the property of an “Archmandrite Ephrem” and it contains English translations of all sorts of snippets.  In particular there are a  number of letters and sermons by Ephrem the Syrian, translated here.  I think few of these exist in English otherwise.

There are no contact details on the site, and the last date I could find was 2008.