This evening I did a Google Images search for images of Old St Peter’s basilica in Rome.  I’ve put some of these online before; but it’s always worth searching again, as new material appears all the time.

Note that you can click on these images to get a larger picture sometimes.

Via this site I learn of the existence of a map of Rome by Etienne du Perac (1577); curiously not from the text, but by inspecting the HTML source for the page!  Here’s a detail of it, highlighting the fountain that stood in the atrium:

The same site also has a drawing of the fountain from somewhere, made anonymously ca. 1525.  One would like to know where this clearly well-informed website got its information!

The huge brass pine-cone still stands in a courtyard in the Vatican, as those who have done the tour well know.  I wonder whether the item has any connection with the cult of Cybele, for a Phrygianum once stood somewhere on the hill, as the 4th century regionary catalogues indicate, and a bunch of 4th century inscriptions from it were dug up near the piazza outside new St. Peter’s.

Next let’s have a drawing of the construction of new St Peter’s.  The remains of the old nave stand to the left here, for this is a shot of the hulk of the new basilica from the north side.  The author is Martin van Heemskerk, in 1536.

Now another drawing (caution – the site plays audio at you!), this time showing the construction from the west.  The pointy tower on the front of the old basilica still stands, with some of the nave behind it.  But to the right is a circular building; the chapel of San Andreas, or “Vatican Rotunda”, a 3rd century tomb converted into a chapel.  And is the tip of the Vatican obelisk just visible beyond it?

Now here’s another overview shot.  This, I learn from Anna Blennow – thank you! – is a detail from Antonio Lafreri’s image of the seven churches of Rome, 1575, here.  The surroundings of the church are not accurate, but the general layout is.  It shows the Vatican rotunda, just to the left side of the nave, with the atrium – and fountain – behind the raggedly front facade.

I also found online a picture of a model from the Vatican museums, although it was back-to-front on the site on which I found it!  It shows the Vatican rotunda, with the obelisk before it (although not the surrounding houses); and also the other 3rd century tomb behind it, the chapel of S. Petronilla, in which the Empress Maria, the young wife of the Emperor Honorius, was buried.  That tomb was demolished very early in the rebuilding, and the grave of the empress found and emptied. 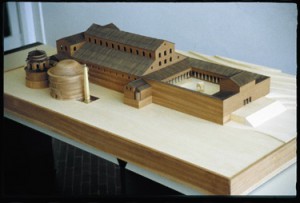 However the most exciting pictures are some colour paintings that had previously passed unnoticed.  The first is a painting of the burning of the Borgo, a district nearby, by none other than Raphael himself!

In the background is the tower, and to the left of it, the facade of the main church inside the atrium!  This, as we shall see, was indeed painted yellow, with pictures on it.  Ste Trombetti kindly drew my attention to this site, which zooms in yet further:

This shows the pope in the tower, and the church behind (not sure that all the elements are in their real and historical places here; but we don’t care, because we get these marvellous pictures).  The image of the stonework in particular gives a sense of scale otherwise difficult to sense in many of the old pictures.

The next image, a fresco from the sacristy in the modern Vatican, from Art Resource gives us a sadly low-resolution image of the exterior of the old basilica, which lines up very nicely with Raphael’s depiction (a high res image can doubtless be purchased at that site).

Finally, also from Art Resource, is another image from the Vatican museum, this time with an unusual “head on” view of the outside of the basilica.  It shows the coronation of Sixtus V in 1585  A larger image of this would be very welcome!

That’s it for now.  Many thanks indeed to Ste Trombetti and Anna Blennow, who saw these images being posted on Twitter and contributed their better images!