This afternoon I sent an email to Lightning Source, who print my books, to take them out of print and close the account.  The account actually belongs to my company, which I may have to dissolve in April as a result of some legislative tax changes.

You might be able to buy copies on Amazon if you are quick!  The hardbacks will not be coming back.

But a small amount of sales has continued with the Origen Homilies in Ezekiel volume, and it would be nice to keep this accessible. 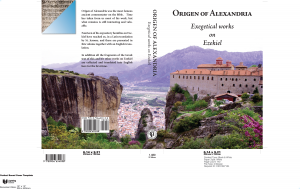 Since 2014, when I last did this sort of stuff, the world has changed.  Everybody seems to use Amazon KDP.  Lightning Source – or Ingram – was always a pain to deal with.  So this evening I have been looking back on my hard disk, and trying to set up the Origen volume in KDP.

It’s time-consuming.  I have an ISBN for each volume, yet Amazon do not recognise them.  The provider – also a pain to deal with – has since changed its offering for managing ISBNs.  I’ve been reduced to emailing them for help.

Then there is the cover.  This was done using a Lightning Source template.  Of course Amazon don’t recognise that.  I’m going to try cropping the template and uploading the raw image.  We’ll see if it works!

I am delighted to announce that Origen’s Homilies on Ezekiel (Chieftain Publishing, 2014, edited by myself) are now freely available online.  This is, of course, Mischa Hooker’s excellent translation of the Latin, and his marvellous and comprehensive edition and translation of the fragments of the Greek.  It is the best version available anywhere.

You can download the PDF with the whole book, or a zip file with word versions of the English translations, from Archive.org here.  Or you can get them below:

Enjoy, copy, circulate.  If you want to use them commercially, please contact me; otherwise do whatever you like with them!

The printed versions will remain available through Amazon for at least another year.  After that, it all depends on whether sales exceed costs.  The hardback is a frankly astonishing, massive item that I am proud to have on my shelves (n.b. I didn’t typeset or do the cover).

It’s been a long road to produce this volume.  I won’t do it again; but I don’t regret it, but I learned a lot of respect for the publishing industry in the process.  And … we now have worldwide access to Origen.

Long term readers may remember that, back in 2014, my company published a rather splendid item in book form, Mischa Hooker’s marvellous translation of Origen’s Homilies on Ezekiel, including the catena fragments, with facing Greek text; some 700+ pages of it.  This was the second volume in the Ancient Texts in Translation series, from Chieftain Publishing.  The hardback was very splendid; and the paperback is a solid item too.

Hard sell:  The book is available still on Amazon.com in hardback ($80) and paperback ($45); and Amazon.co.uk in hardback (£50) and paperback (£30).  Amazon don’t keep a lot of stock, naturally, but you can order any of these as all are in print.  Lead time is probably about a week when out of stock.  Please get your university library to buy it! 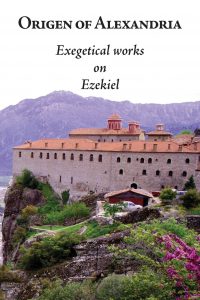 The idea behind creating paper books was always to sell enough copies to justify commissioning more academic translations, ideally to university libraries.  Once sales dried up, the book would be released onto the web in the public domain.  This was (and is still) always the intention.

It’s interesting to find that the book is turning out to be something of a slow burner.  Initial sales were not impressive.  Originally no English translation existed of these homilies.  But during the project, the excellent Thomas P. Scheck released one in the well-known Ancient Christian Writers series; and this naturally stole our thunder somewhat.  However he only included a translation of the 14 homilies from Latin, without the original language or the fragments.  Dr Hooker did take account of the Scheck version, which appeared when ours was almost complete.

But I find that the book has continued to sell!  In fact I was surprised to find that it made enough money last year, after three years, to justify keeping it in print for another year.  This was unexpected.

Today I learn that a new review of it has appeared, by Peter W. Martens, in the Society for Biblical Literature’s journal, the Review of Biblical Literature, and published 3rd Jan. 2018.  The review is accessible to SBL members here.

In fact this is the third review that has appeared (to my knowledge), the others being by:

I must confess to being encouraged by these.  With luck they will result in further sales.  The more copies that sell, the more I might feel inclined to do it again.  I do not believe that the Origen volume will ever recover the investment of money and time that I put into it (to say nothing of others); but if it comes anywhere near doing so, then that is all money to put into further projects.

But I still intend to release the results online.  I nearly did so this Christmas.  Maybe at the end of the year.

Just wanted to alert you that John Sehorn successfully defended his PhD dissertation on Origen’s Homilies on Ezekiel 1–14 not long ago (link). Apparently it includes a translation of the text. He’s been at it for over three years now – I guess working parallel to you[1] and Scheck.[2]

I don’t know.  You wait four centuries for a translation of Origen’s homilies on Ezekiel, and then three come along in a period of 24 months!  But the more the merrier!

The Mischa Hooker translation, however, is more complete than either the Scheck or Sehorn versions, since these only translate the 14 homilies from the Latin version made by Rufinus, while Hooker also translates a vast array of Greek fragments from all the works of Origen on Ezekiel, and includes a facing Greek and Latin text.  But then, since I published this version, perhaps I am biased!

It is still my intention that Hooker’s text and translation will appear online, freely accessible, once sales trickle to nothing much.  I’d just like to recoup at least some of the investment first.

UPDATE: 5th Jan. 2018.  I find that there is a webpage at Notre Dame for John Selhorn’s translation here.  It’s open access, but not available for download; a curious combination.  I might write and see if I can get a copy!

The second book in Ancient Texts in Translation is now available.  This is a translation of all that Origen wrote on Ezekiel, together with the original text.  The work was translated by Mischa Hooker, who has gamely worked away at this for five years.  The results are really quite satisfactory.

I’m not sure that I actually announced this when it was released, so here’s an overview. 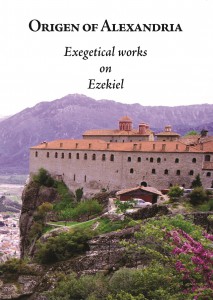 Origen wrote three works in which he commented on Ezekiel.  He wrote sermons, composed a commentary (almost entirely lost) and also scholia.

The series of fourteen expository sermons is lost in the original Greek, but the content is preserved in a Latin translation.  The most recent critical text, and a new English translation, are printed here.

Following these is a long section containing the fragments of his work in Greek.  This comprises the fragments of the original Greek of the sermons, together with the remains of the scholia and the single remaining fragment of the commentary.  The fragments are ordered by the chapter and verse of the bible to which they relate.

The fragments are all derived from medieval Greek bible commentaries, known as catenae.  These consist of “chains” of quotations from earlier authors.  The text as printed by Charles Delarue is used, together with other fragments given by W. Baehrens.  As an appendix a series of fragments from the Onomasticon Marchalianum are given.

The volume has been produced in order to make the translation more readily available.  The original language text is reprinted from the best available critical edition and appears on facing pages.

Somewhat annoyingly, while the project was in-flight, a rival translation appeared in the ACW series, by Thomas Scheck (who has done sterling work on the homilies of Origen).  But that is now some years ago, and his volume only contains the homilies and not the vast array of fragmentary material.

The book is available in hardback and paperback at Amazon.co.uk and Amazon.com.  Here’s the links:

I – or rather Chieftain Publishing – can also accept purchase orders from institutions.

It is actually selling reasonably well. I’d be grateful for your support, as it did cost rather a lot of money and life-energy to produce!  The sales help to make it possible for me to commission further translations.

The intention, as with volume 1, is to place the book online once the sales drop to nothing.  We’re nearly there with volume 1 now, in fact.  So this is not a hard money-making scheme, but a way to get a translation made that will not be kept offline by greedy publishers.  I expect to lose money on it.  Your purchases reduce the amount I lose!

A bit of a red-letter day today: the interior setup of the Origen book — or Origen of Alexandria: Exegetical works on Ezekiel as I must get used to calling it — is complete.  This evening I uploaded the PDF to Lulu.com (which I use to generate proof copies, because Lightning Source do not provide such a facility), and ordered myself a printed and bound copy with a blank cover.

This first proof copy will allow me to check that the PDF actually is right for the printer (well, for a printer), and that the text block doesn’t disappear into the binding and so on.

It’s now the Christmas period, so I don’t suppose this will appear until after Christmas.  But once it has, I will generate another proof copy for the translator; two pairs of eyes being better than one.  There’s bound to be glitches somewhere, but the typesetter, Simon Hartshorne (whom I found through PeoplePerHour.com), has really done an excellent and painstaking job.  He’s also verified the requirements of Lightning Source.  Let’s hope that the cold light of print doesn’t reveal too many errors on anybody’s part!

Of course I had no idea how long the book was going to be.  Lulu.com will only handle books up to 740 pages.  Fortunately the book is 738 pages, without endleaves, so it will just scrape in!

The cover design is finalised, and the templates for the hardback and softback covers will be obtained and completed this week.  Simon Hartshorne is doing the cover design as well, and he found a very acceptable pair of cover photographs.  It was almost a pity that we couldn’t use both!

I have to admit that Simon has rescued the project, which had languished for a year or two now.  The speed and efficiency with which he proceeded through the book — even though I don’t think that he had ever set up an academic book with facing Latin/Greek and English pages — gave everyone an impetus to do the 1% remaining writing.  He priced competitively as well.