A correspondent is helping revise the Eusebius book cover.  A problem that I am encountering is that Nick the graphic designer is using Adobe Indesign CS3, while Bob the typesetter is using CS5 and Ben who is doing the revision is doing the same.  It turns out that you can’t export from Indesign CS5 back to Indesign CS3.  That effectively makes it impossible for my team to work together on the cover.  For a piece of software costing a thousand dollars, that is very bad indeed.

So … I’ll have to compromise somewhat on the cover.  Oh well.  I don’t want to delay the book further.

I’ve been onto the Lightning Source site and rejected the first proof.  When LSI tell me what to do, and I get the revised PDF from Ben, I’ll try a second proof.

Mind you, Lightning Source charge very heavily for the proofs: $40 a go.  So you really don’t want to do this lots of times!

Personal note: I started a new job a week ago, which is rather tiring because of 8-hour days, but looks as if it will be OK.  Mind you, I really feel the extra half-hour!  The job will involve some travel as well, it turns out.  Just when it was least necessary, today I saw a house which I wanted to buy (for buy-to-rent – I’m not moving house), which means rushing around about mortgages and the like, and generally spend a lot of time talking to people one usually tries to avoid!  And my washing machine broke down!

But such is life.  “Life is what happens to you, while you are making plans to do other things”, as the saying goes.  I’m enjoying rather a lot of life, then.

I’m really looking forward to getting back to sanity, and the classics, and the fathers!

Starting a new job today, so not very much free time.  The new job demands 8 hours a day, rather than the usual 7.5 — there is a nasty trend in modern work to increase hours worked, and to try to get even more than that, and get hours unpaid.  Oh well.

Meanwhile a correspondent, who needs a copy of the Eusebius book for academic purposes, has agreed to buy the first proof from me.  This proof has an unsatusfactory dustjacket, which is being worked as we speak, but is otherwise as production so is fine for his purposes.  The sale will help pay for the second proof.  Unfortunately I can’t find any time to answer emails to do with this.  Maybe tomorrow.

I’ve spent a little leisure time — I have only a little time — working on the Wikipedia article on these lead codices from Jordan.  Not that I am doing any of the research which is exposing the scam; just linking to those like Tom Verenna who are emailing the key figures in the story.

I’m trying to get the issues with the dustjacket fixed.  Everything is taking longer than it might!  The graphic designer isn’t responding to my emails — I don’t think I was nasty to him, but I did have to say that the proof showed up problems, because it did.

A reader has kindly jumped in and is making some possible changes which may do instead.  Also Bob the typesetter has answered my email after a two day delay and had a go at fixing  them too.  But … I can’t see what he did as I don’t have a copy of InDesign and he can’t export as PDF since I didn’t realise I needed to send him the images separately!

It is a little frustrating to be so close but unable to get it done.  Still, I think it will happen.  I start a new job on Monday, which will mean that I can’t spend much time on this then.

I’m also working on getting the Amazon “search inside” functionality working.

The proof copy of the hardback of Eusebius Gospel Problems and Solutions has arrived.  And it looks great!  The cover image is exactly right.  The book as a whole looks very solid.  I’m glad about that.  I’m also glad I went with a dust-jacket.

However … I’m not happy, tho, about the typesetting of the text matter on the cover.  That has not been done correctly, in my view.  It’s hard to see why courier has been used, for instance.

The graphic designer I spoke to today can’t handle Adobe InDesign, which is the necessary format for the cover template.  This is unfortunate.  I might ask Bob the typesetter who did the interior — now looking very good indeed in the hardback form — for help with this.

The cover graphic that I released into the publishing system has turned up on Amazon and … is terrible.  That settles it.  I have written to the logo designer I used earlier this year and asked him to quote to work over the cover graphics — i.e. the text — and turn it into something professional.  I’m afraid that, good as he was on image selection, the designer I was using does not have the skills necessary to finish the job.  I may still pay him to select a cover image, for the Origen book, tho.

Meanwhile Lightning Source have advised me that the proof copy has been produced and is on its way.  It will be interesting to see what the hardback quality is like.  That ought to arrive this week, I would guess.

And Amazon are saying that the book is available for pre-order.  Curious — I think differently!

Good news.  I have just submitted to Lightning Source the PDF’s for the hardback version of Eusebius of Caesarea: Gospel Problems and Solutions.  It’s now in the works.  I’ve ordered a proof copy — necessary mainly for the cover.  I’ll wait until I’ve seen that before I submit the paperback.  Intended real publication date for both is now 1st May 2011, but of course they may become available sooner.

In the meantime, have a look at the cover image: 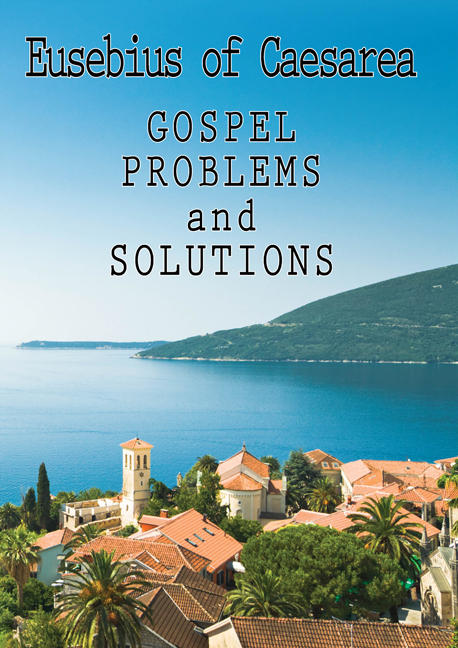 All this work with James of Edessa has reminded me that I never got his preface to his Chronicle online.  It’s quite interesting, being a discussion of whether Eusebius’ calculation of years is correct.  I’ve emailed someone who might do it, offering the usual, and I’ll stick it on the web when it’s done.

I also found myself wondering about Arabic translations of James’ letters.  Vol. 1 of Graf does indeed have a short section on this, although there doesn’t seem to be much.  But there might well be more in existence than is listed here.

Meanwhile Eusebius grinds forward.  I think we probably have a final cover design.  It was down to two sets of choices yesterday, and I gave my thoughts.

I’ve also read much of Aaron Shepard’s “POD for Profit”, which really is a necessary purchase if you want to use Lightning Source.  In particular he discusses why assigning a margin of more than 20% is a great mistake.  I won’t reproduce that here — wouldn’t be fair to him — but you do need to read it if you’re going to use Lightning Source.  He also answers a number of questions that you’re going to have.  All of which will make the upload process much easier for me.

Apparently it takes about a month from when you upload the book to when it is available to buy.  I hope to upload later this week.

The cover photo is chosen and purchased from istockphoto.com, for the trivial sum of $50 for the largest size image — a tenth of what other libraries wanted.  I sent that to the designer last night.

We’re getting very close to the final cover design.  I wrote a blurb this morning and sent that over.  His logo designs were not as good as the one I commissioned some time back so we’ll use that.

I also started the process of submitting the book to Lightning Source.  All went well until I had to input price and wholesaler margin.  There’s no indication of what I ought to do here.  Apparently 55% margin for the retailer is normal — that’s not very good!  So I need to find out some more about this — because if I set it to 0%, I don’t know what would happen, but probably nothing good.  I need to know what the constraints are on this.

I’ve also started thinking about a website.  Another book selling site told me what they had paid for their site, which was rather poorly designed — $700!  But it looks as if a WordPress blog with an eCommerce theme might do me very nicely.  I need to set up another instance of WordPress here and experiment!

Some more designs have reached me for the dust-jacket cover of the translation of Eusebius’ Gospel Problems and Solutions, that I commissioned and shall be publishing.  I hope to have the book out this month.

The new designs refine the direction of the last set, and confirm which cover image we will be using.  When Nick the graphic designer tells me the URL, I shall purchase that.

I’m also translating another letter of James of Edessa, which I will place online when it is done.

Four images of possible dust-jacket covers for the Eusebius Gospel Problems and Solutions book have today arrived by email from the graphic designer.  They all look good — far better than anything I would have managed.  A quick query with some work colleagues, and we have a clear leader from the four, and some suggestions for revision.  I’m very pleased.

The designer has also referred me to istockphotos.com, for reasonably priced photos, just as good as those ten times the price.

I’ve also heard from Lightning Source about how to upload the book to them.

So … it’s all going rather well.